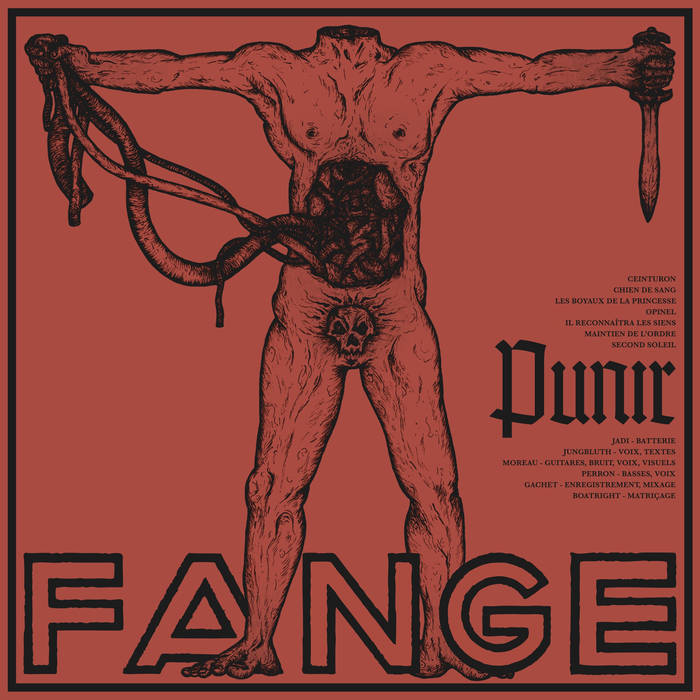 The Pitch: French blackened sludge crew Fange are at it yet again  with perhaps their most death-influenced outing to date via Throatruiner Records.  FFO The Lion's Daughter, Drouth, Lord Mantis

What I Like: Fange has rapidly been building up steam over the past 3 or so years with filthy releases like Pourrissour and Purge. Their unholy union of blackened sludge a la Lord Mantis with the industrialized tones of Godflesh has made for a particularly potent onslaught of depravity and decay. But Punir finds the band further evolving in new and interesting directions. While the foundations shared with the likes of Plebeian Grandstand are still present, there is a lot more going on with this album.

Vocals favor more of a death metal delivery this time around. When joined with the the sludgy, buzzing grooves, the entire aesthetic shifts to one of OSDM and death doom. With it's raging D-beats, "Les Boyaux De La Princesse" often sounds like a straight up 80's/90's anthem. Meanwhile, the elevated use of spooky electronic effects and killer breakdown towards the end of "Chien De Sang" have me connecting the trails of red yarn and push pins to the likes of The Lion's Daughter. In fact, if there was only one band with which I could compare Punir's approach, that would be the one. In fact, I'd argue that this album feels like more of a direct follow-up to Existence Is Horror  than the far more experimental Future Cult was.

Critiques: No major qualms here. There's still room to iron things out as band continues to slither through these sonic metamorphoses, but overall I'd say that these compositions are far more memorable and interesting than anything they have done before.

The Verdict: Punir is Fange's finest achievement to date. While I have enjoyed their sound from the very beginning, this is the album where they really come into their own. Fange are coming out of their cocoon, and I'm both excited and horrified to see what winged monstrosity emerges into the night.