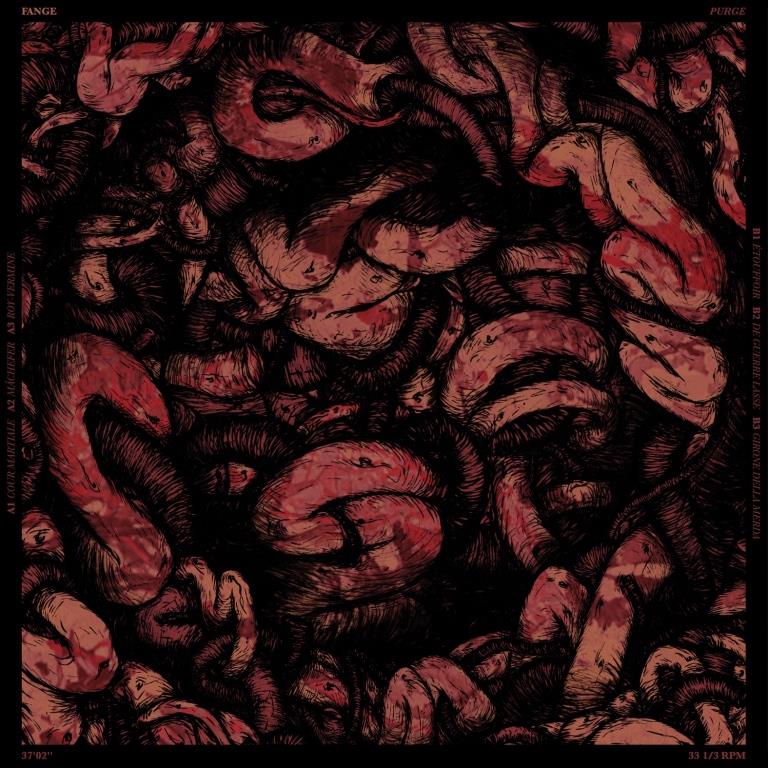 Fange was founded in 2013 in Rennes, France.  The band plays a devastating mix of stoner doom and blackened sludge that should be just delightful for our more disturbed denizens.  The closest comparison seems to be Plebeian Grandstand with the focus often on atmosphere and dissonance, but at the drop of a hat these guys will depart from that model with some truly grimy grooves and D-beat.  The bass guitar will rattle your skull to peices.

"Ungh!"  There's no such thing as overdoing the classic Tom G Warrior exclamation.  Full speed ahead is something these guys do particularly well.  I'm sure their live shows are deafening given the massive levels of distortion and reverb.  The vocals sound like a dying beast howling into an old voicemail machine.  Would you like to accept a collect call from "WAAAARGH!"  But not everything is cascading toms and punk rock power chords.  As mentioned, some of the gooier riffs would be right at home on a Black Sabbath record.  At a slower pace, Fange is absolutley dripping with groovy tar.  Simple additions of disconcerting little guitar hooks paints a much darker picture than their 70's peers.

If I do have a complaint about Purge, it's that the tracks overstay their welcome just a touch.  I don't think there is a single song on this album that didn't put its claws in me within the first minute, but as some of them start to drag past the 4th or 5th minute, I start to get a little bored.  They do a better job than most about progressing into different movements over the timeframes, but 7 minutes just feels too long for this style.  Even so, certain tracks like crushing opener, "Cour Martiale," "Étouffoir," and "Girone Della Merda" prove that when Fange is in top form, they can make it work.

If you enjoy Grim Van Doom, Thera Roya, Love Sex Machine, or The Bendal Interlude, chances are you're going to enjoy Purge.  I am fond of how many of these bands are fusing the once more disparate worlds of weed-smoking, old school doom riffs with the more volatile sounds of blackened sludge.  The resulting tunes lend themselves well to a deeper variety and when joined create something that is positively crushing.  Forget the phoenix rising from its ashes, we've got mammoth fossils rising from the tar pits.