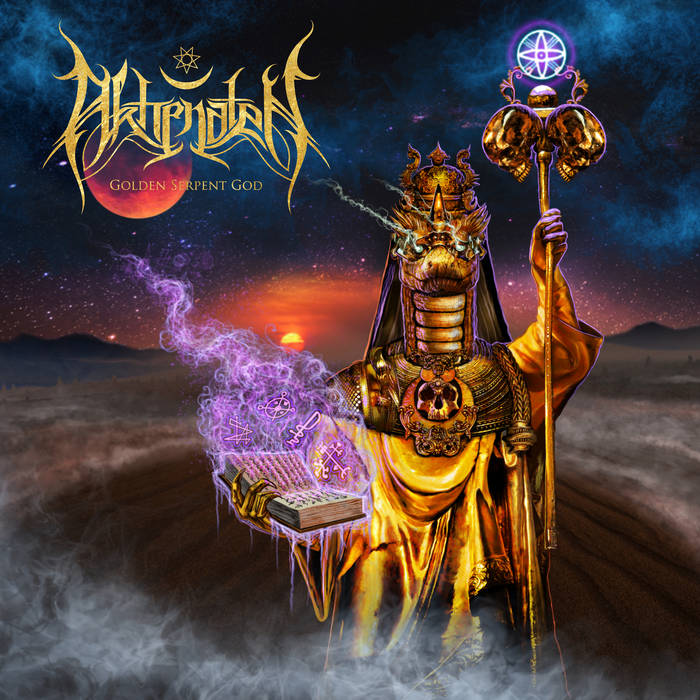 The Pitch: Colorado blackened death metal band Akhenaten presents their new album Golden Serpent God via Satanath Records. Steeped in the mythology and mysticism of ancient Egypt and Mesopotamia, along with the symphonic instrumentation of the region, this duo does great justice to the style popularized by the likes of Al-Namrood, Narjahanam, Melechesh and Kartikeya.

What I Like: I was already greatly impressed by this band's previous effort, as well as their black metal project Helleborus, but Akhenaten have really stepped up their game. Had I not been told hat this project was just two dudes from the US, I never would have known. Golden Serpent God is absolutely awash in stunning Middle Eastern instrumentation. This lush, exotic approach sparks up the imagination and transports the listener to another time and place, especially on lengthy instrumentals like "Akashic Field- Enter Arcana Catacombs" and "Sweat of the Sun." Furthermore, it is implemented with obvious respect and admiration. Akhenaten aren't merely co-opting the culture and history: on this album they are living it.

On a related note, this is not merely blackened death metal with a dose of regional symphonic elements. The black and death metal vocals and ominous guitars gel perfectly with the tribal drumming, sitar, etc. such that they are ultimately inseperable. To use an old sociology phrase, this is a "melting pot" of styles, not a "salad bowl." And furthering this cohesion is the production: a transfixing balance of old and new approaches. The sound is rich and expansive while also maintaining a certain nostalgic brashness characteristic of classic black metal releases.

Critiques: I really can't think of anything truly negative to say about this album. It's certainly not something I've never heard before, but this is the best attempt at the style I have heard in some years.

The Verdict: With Golden Serpent God, Akhenaten have stepped up their game to deliver arguably the best symphonic release of 2018 so far. All of the marks are greatness are there from engagement and consistency to songwriting and production. And if some white knight metalgate blogger brings the terms "problematic" or "cultural appropriation" anywhere near this release, they've completely missed the point. This is a celebration, not some shallow cash grab.