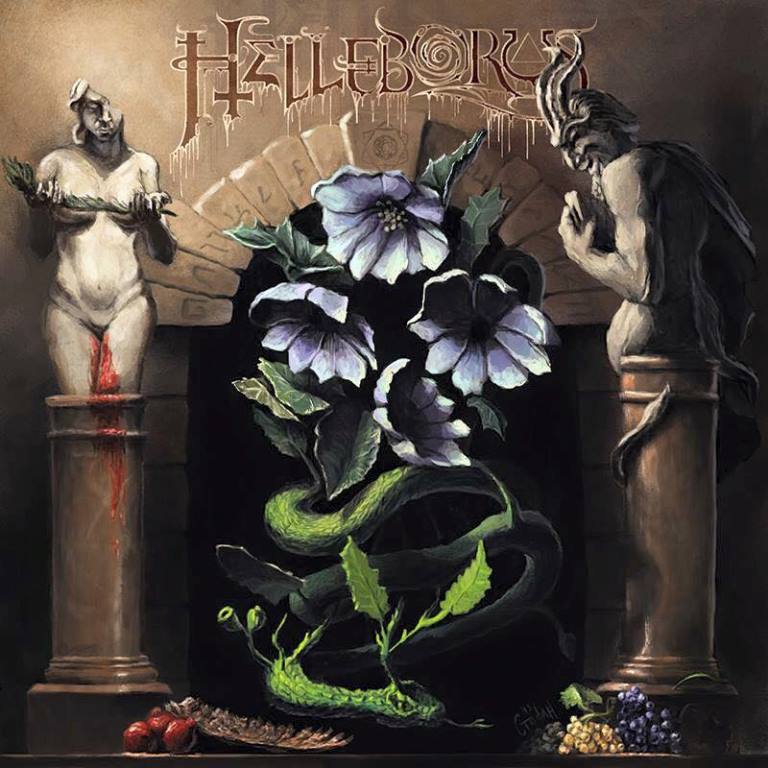 Down in the Catacombs

The Carnal Sabbath
by Helleborus

Helleborus is the latest emanation of Jerred & Wyatt Houseman. You may have caught our review of another work of this Colorado duo this year in Akhenaten's Incantations Through the Gates of Irkalla.  But Helleborus forgoes the strong Middle Eastern influences for straight doomy black metal.  The project is named for a deadly winter flower, which is fitting of the insiduous chill held within these songs.  Says Wyatt, “We've always had a vision for the type of black metal project Helleborus would be. We wanted to explore and deliver a darker and yet more romantic side of black metal. There is an unknown side of metal that is masculine and powerful, yet sensual and respectful; controlled chaos."

The Carnal Sabbath took me a little time to settle in, but with each listen the shadows around me seemed to converge and take firm hold.  It is a slow and foreboding bit of black metal that takes its time to build its atmosphere.  Listening to the opening track, "Helleborus Back," is like entering a moist, cobweb-ridden catacombs with only a few torches and the croak of ominous voices echoing down the tunnels to guide the way. Helleborus lure you into a trance with grim hooks for several minutes only to erupt into sudden bouts of blastbeats and shredding, high-pitched guitars. At almost an hour long, and given the lengths of some of these tracks, it is beneficial that the brothers Housemann have these strengths in songwriting.  The duo clearly understands dynamics and pacing.  Tracks like "Coils" develop a great head-bobbing vibe and carry it on just long enough before it becomes boring and then will change things up with the drumming and ramp up the tremolos.  Then they'll throw in something completely different, like the fabulous "Edge of Black Waters" that sounds more like an 80's heavy metal power ballad combined with harsh black metal vocals.  This is definitely a track I could see people like Fenriz and Tom G. Warrior talking about.  And you gotta love that main hook and pyschodelic 70's solo.

So The Carnal Sabbath is a bit of a grower, or at least it was for me.  But once it gets its coils (harhar) around you, I doubt you will be going anywhere.  The Housemans continue to prove that they are not only extremely industrious in the amount of material they can put out in a short amount of time, but that they have the talent and know-how to back it up.  Furthermore, they are stylistic chameleons whose variety of styles and influences are likely to keep future releases fresh and exciting.  The album releases today, June 17, 2016 via Satantha Records and Black Plague Records.  It has been recommended for fans of Satyricon, Necorphobic, and Belphegor to name a few.