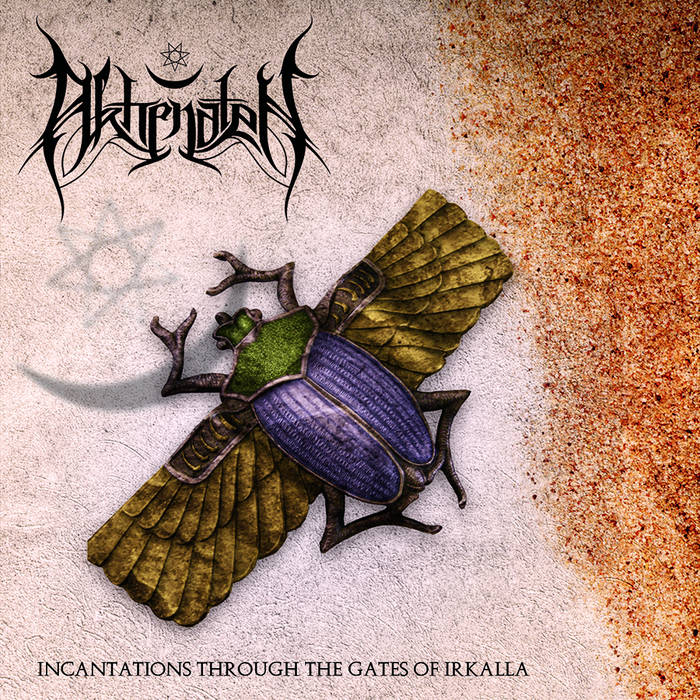 Incantations Through The Gates of Irkalla
by Akhenaten

I just did a double-take as I pulled up the band info to write this review: Akhenaten truly had me fooled.  "Surely," I thought, "This is some band out of India or somewhere in the Middle East...perhaps North Africa."  Nope.  Manitou Springs, Colorado.  Well played, boys.  Region of origin aside, I still want you to know that Incantations Through The Gates of Irkalla is a killer record.  The two brothers responsible state the album "expresses the Ancient Mesopotamian themes/ alien theories exploring the forgotten paths of history, extracting unknown lore and threads of truth."

Forget "sumeriancore."  This is the real deal.  The guitars and other standard elements are really just here to heavy things up a bit.  Instead of focusing on riffs and outright extremity, the Housemans put together an impressive, oppressive peice of symphonic black metal backed by a full set of traditional orchestrations.  Did you check out Al-Namrood?  It's kind of like that, except without the gruffness and increased death metal infulence.  Dozens of instruments I couldn't name but have heard many times before take center stage.

The drums alone are incredible.  The tribal element and level of energy give the album such vitality.  Add to this all sorts of Eastern stringed and wind instruments to the mix and it is no wonder why Akhenaten sometimes choose to let the music do the talking.  The lengthy instrumental portions, particularly "The Watchers" were some of my favorite parts.  But that's not to say that the vocals detract from my enjoyment.  Quite the opposite.  When "Ninurta: The Fall of Anzu" (free download HERE) takes hold, you will be grooving to the music just as much as you make "grim face" to the imposing blackened growls.

If I have one gripe with the album, it's that the production is a touch inconsistent.  While "Ninurta" sounds absolutely massive, some of the other tracks feel a little thin and muddy, as if they were recorded at another time and place.  In any case, this is a mild complaint, as the musicianship never failed to engage me.  There's even a cover of one of my favorite group's, Septicflesh, songs "Anubis."  If you are in the mood for something outside of the Western aesthetic...put together by a couple of Westerners...you should check the album out below.  Enjoy.