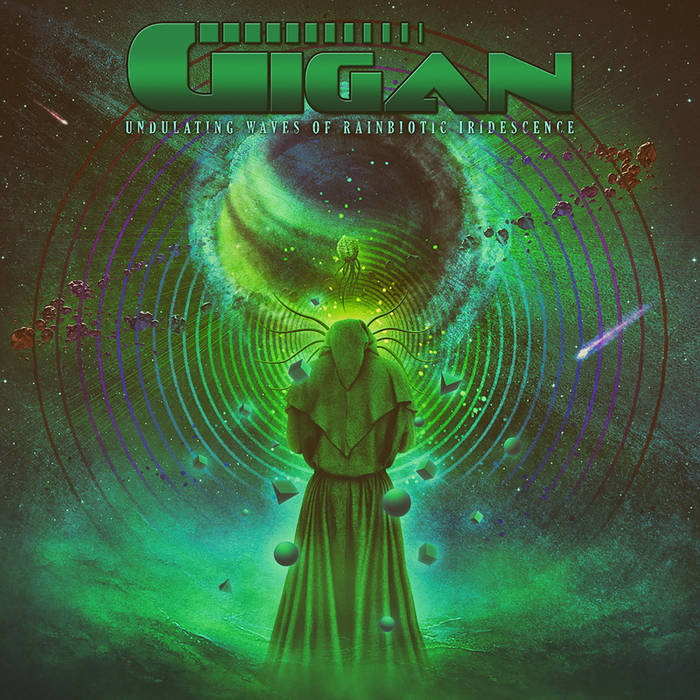 What I Like: If you're not yet familiar with Gigan, now is the time to remedy that alarming oversight.  They are one of the most original and exciting death metal acts around today.  OG experimental DM.  A lot of the great stuff we're hearing this year from the tech and prog death camps, Gigan has been doing it for the better part of a decade.  Both Multi​-​Dimensional Fractal​-​Sorcery and Super Science and Quasi​-​Hallucinogenic Sonic Landscapes are masterworks when it comes to technical proficiency and innovative approach to composition.  But those are the past; what of Undulating Waves of Rainbiotic Iridescence?

True to their roots, the band continues down the path less traveled; one seemingly beyond space and time.  One could probably best introduce this album with the opening of The Twilight Zone.  Both the drumming and guitarwork are not only delivered with the utmost skill and dexterity, but also in ways that constantly defy convention and expectations.  There is little in the way of traditional verse-chorus structures, and no two parts sound exactly the same.  This is largely thanks to performances across the board that feel live, unaltered, and sometimes even improvised.  It's all of the ferocity and chaos of Wormed, but without the digital sheen.

Critiques: Maybe my ears just haven't evolved enough to fully appreciate or even comprehend it, but the level of dissonance on this record is a little beyond me at times.  This is a band known for experimentation and noise, but I'm not sure it's always effectively harnessed as I have heard on the previous two albums.  The opening track in particular  fails to maintain my interest, and repeat listens had me skipping past more and more material throughout the duration.  There's just not enough glue to hold this hodgepodge of materials together.

The Verdict: With all of my anticipation for this album, I'm a little dissapointed when measuring against its predecessors.  However, that is not to say that Undulating Waves of Rainbiotic Iridescence is a bad or even average album.  Quite to the contrary, from a musicianship and innovation standpoint it is still among the most notable of 2017.  It seems that when you're one of the best in the game, it can be hard to top your own standards; but even the worst of the best is still among the best.

Flight's Fav's: Elemental Transmography, Plume of Ink Within a Vacuum, Hideous Wailing of the Ronowen During Nightshade