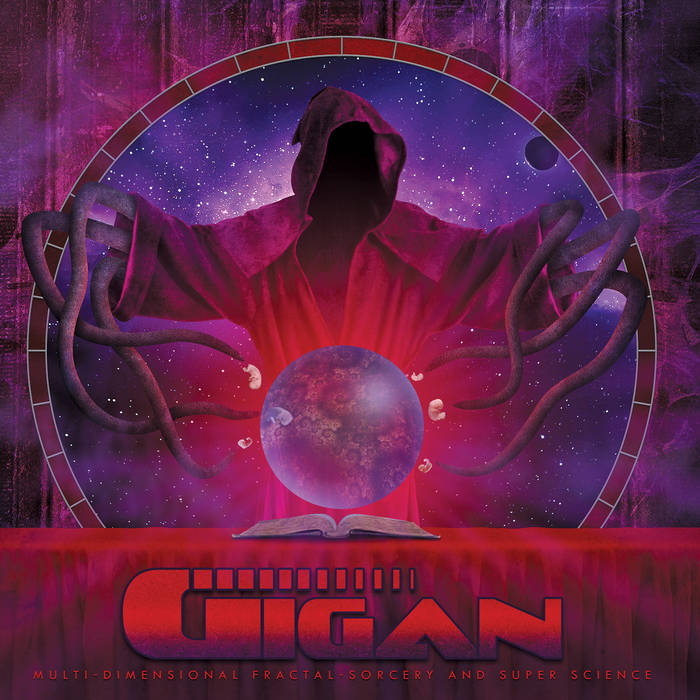 When I was growing up, death metal was happening all over the place. You had the continuing explosion of brutal death metal, the hay-day of melodic death metal, and the development of technical death metal. With such exponential growth, the bubble is always bound to burst. And it did. Oh how it did. Since then, most of the genres have become caricatures of their former selves. There is the occasional surprise here and there, but for the most part, these wells have gone dry.

And yet from the ashes, a new breed of technical death metal seems to be rising. Between groups like Ulcerate, Malthusian, and Portal; there seems to be a veritable geyser of untapped potential that is far from stagnant. Enter Gigan, a tech death band far removed from the endless waves of Dying Fetus clones. With a penchant for the progressive, and occasionally psychedelic, the latest album Multi-Dimensional Fractal-Sorcery And Super Science is as impressive as it is wordy.

The most basic thing about this album is probably the vocals. They are your typical death metal grunts and growls with the occasional retch for good measure. But Gigan’s “basic” is your average group’s 110%. Eston Browne will throttle the shit out of you. Each verbal assault is measured and calculated to be as crushing as possible. But let’s move on to the true stars here: Nate Cotton and Eric Hersemann. These cacophonous riffs and insatiable rhythms will have your head spinning like Lind Blair. Time signature leap from measure to measure while the guitar throbs, pulsates, and punctures.

And yet, for all of its chaos, Multi-Dimensional Fractal-Sorcery And Super Science is far from an unfettered freak show. This is “technical” death after all. Each wailing chord, each sweeping of the fretboard, each jarring tempo change is coldly calculated. There is a level of order that rivals the aforementioned Ulcerate, but within a completely different aesthetic. Foregoing a bleak, sandblasted blackness, Gigan occupies a massive obelisk in the cosmos. There are surprising amounts of hooks and memorable moments carrying each song through time and space.

Final word: this is some of the best death metal you will hear from the past few years. It's alarmingly technical, but not in the done-to-death (har har) traditional sense. There is a sense of the psychedelic, as well as a masterful churning of dissonance into melody and order. This is a supernova contained within a tesseract.