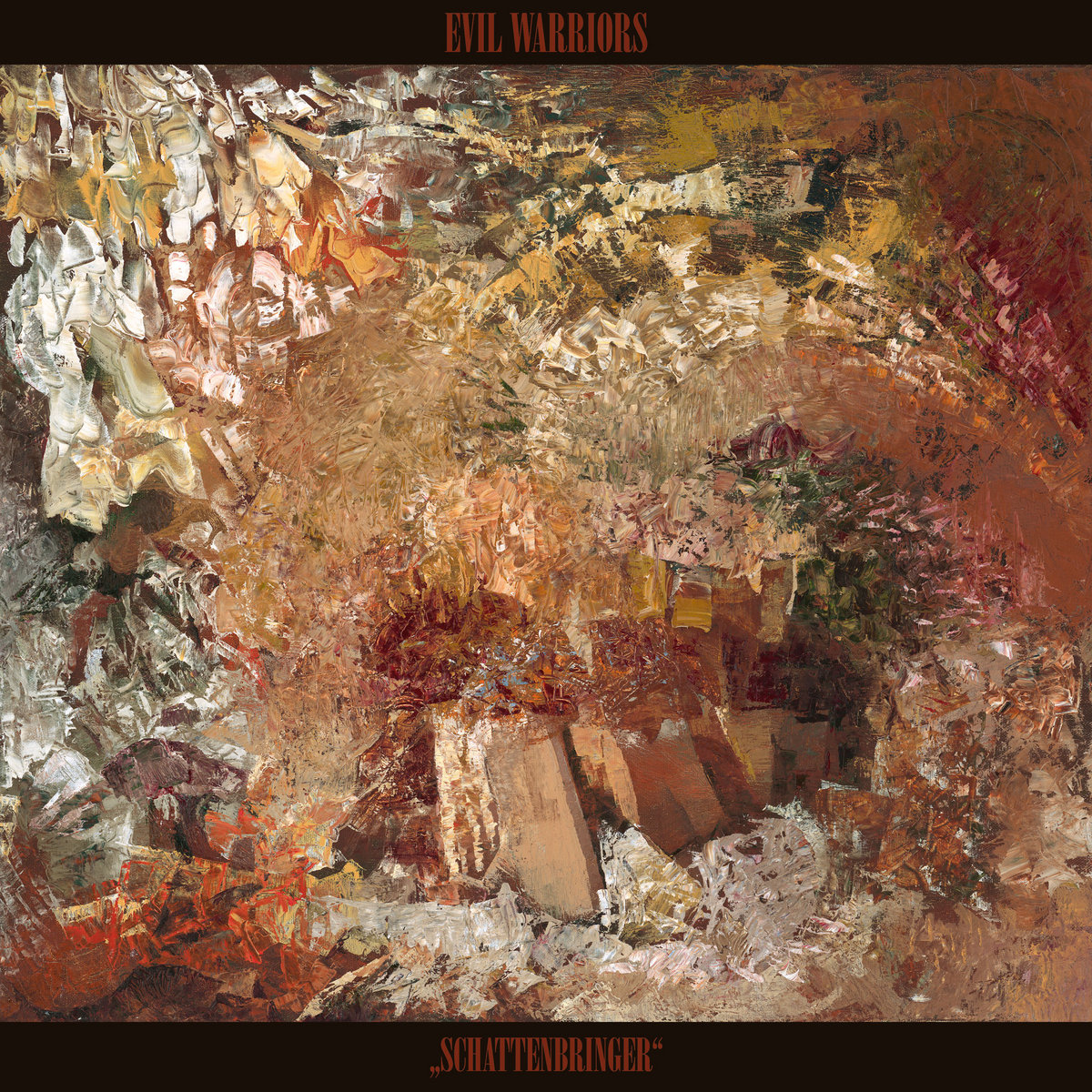 EP’s often provide a way for bands to release material that has a more experimental approach than their albums, allowing them freedom to try out different ideas that might not fit within the confines of a full length.  Germany’s Evil Warriors has done this with their latest effort Schattenbringer, a four-song effort that finds them expanding upon their fluid and hypnotic approach to black metal while also heading into drone and ambient territory.  While the latter might prove to be a hard sell for some listeners, it’s an intriguing release that finds this long-running band pushing out of their comfort zone.

The first three songs feel like a natural progression from 2018’s Fall From Reality, offering material that provides plenty of twists and turns as it pummels listeners into submission.  Opener “Fliege” may sound a bit traditional at first with its triumphant guitar leads and steady blast beats, but it doesn’t take long for the instrumentals to reveal their more fluid nature as the band slows things down a bit after a few minutes.  The interplay between the thicker bass lines and shrillness of the guitars proves to be utterly appealing, as it creates a dense wall of sound that washes over listeners and often feels like it’s going to put them into a trancelike state.  But rather than simply building up in a straightforward fashion, the instrumentals tend to change when you’re just starting to become numb to the attack and make the material often feel like a rollercoaster ride.  This may not seem like that drastic of a departure from the group’s previous album, but there’s even more emphasis on the bass this time around which makes the overall sound even more abrasive and jagged, amplifying the intensity of the material.  But it’s the twenty-one-minute closing track where Evil Warriors takes a left turn into drone territory, as they take the layers of noise and haunting ambiance from the previous three songs and stretch them out into a freeform composition.  It’s a lot to take in, especially for those that aren’t well-versed in the genre, but the atmosphere here proves to be just as interesting and hypnotic as the black metal, as if these bursts of noise and haunting melodies are pieces of the destruction the rest of Schattenbringer has left behind.

When it comes to the vocals, Beast’s approach hasn’t changed that much over the years and his higher pitched screams still perfectly suit the madness Evil Warriors is able to channel through their music.  Despite how dense the instrumentation is, Beast’s screams boom over top of them with an immense and otherworldly presence, as if he’s shouting from the peak of a mountain.  There’s a considerable amount of distortion to his voice and as the guitars and bass twist their notes into a whirlwind his performance seems to only get more chaotic.  It feels appropriate that I’m reviewing this EP and Fides Inversa’s latest on the same day, as the vocals on both releases have so much power behind them that they often overwhelm you.

If you’re interested in the drone/ambient side of this EP chances are you’ll want to grab the vinyl, as the recent Bandcamp release only included the three black metal tracks.  But regardless of which version you end up with, this is another strong showing from Evil Warriors that finds them continue to journey into madness.  It’ll be interesting to see if some of the noisier, freeform elements of the drone track are utilized by the band down the road in conjunction with the black metal, but if not this proves these guys are capable of wherever they choose to go.  Schattenbringer is available from Into Endless Chaos Records.