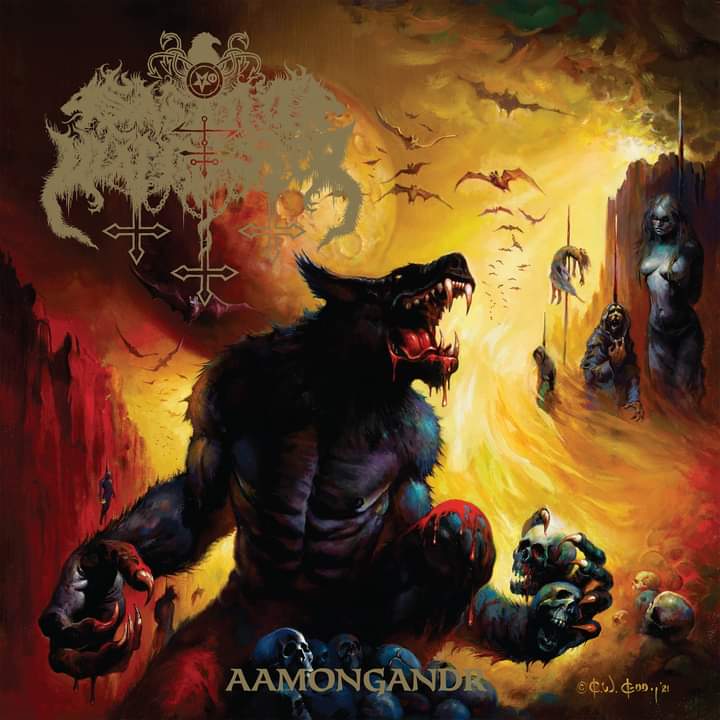 Satanic Warmaster may have emerged from the shadows years after some of the other influential Finnish black metal bands, but few have been able to match Werwolf’s melodic and raw approach to the genre.  2014’s Fimbulwinter was a significant departure from the group’s previous discography in terms of production values, shedding some of the rawness of the recording in favor of a fuller sound and a bit more diversity to the songwriting.  Since then listeners have been waiting to see just where Satanic Warmaster would head next, but material has been sparse outside of some splits and other miscellaneous releases.  This isn’t that surprising considering Werwolf’s involvement in a slew of other projects as well as his record label Werewolf Records, but right as 2022 came to an end the silence was broken in the form of Aamongandr.  Continuing the clarity of Fimbulwinter while heading in some different stylistic directions that feel more epic and atmospheric, this effort feels like a natural progression for Werwolf and showcases once again why his material has the staying power some other bands don’t.

I’m sure there are still plenty of people out there who prefer the rawness and speaker destroying qualities of earlier Satanic Warmaster material, and while I like it just fine, I found Fimbulwinter to be a welcome change thanks to its added clarity.  This approach has been continued on Aamongandr but the songwriting has seen some noticeable tweaks, coming off as more epic and symphonic at certain points while retaining the harsh and murky foundation the band is known for.  Opening track “Bafomet” feels right at home in Satanic Warmaster’s discography with pummeling drums and guitars that bring that wall of abrasive riffs and soaring melodies, but the leads seem to soar to even higher heights than before.  As you make your way through Aamongandr you’ll start to notice how prominent the keyboards are, as songs like “Duke’s Ride (Ride of the Spectral Hooves)” and “Eye of Satan” deliver haunting keyboard driven melodies that hover over the recording and build up the atmosphere significantly.  Werwolf has used plenty of keyboard in the past, but with the tweaks to the production it stands out much more and feels woven into the songwriting more than before.  But it’s the riffs that continue to showcase why Satanic Warmaster is so well known when it comes to Finnish black metal, and each of the six tracks has a particular passage that’s likely to get stuck in your head after repeat listens.  Admittedly the slower paced closer “Barbas x Aamon” does drag a bit at almost eight minutes in length but given the compact thirty-six-minute run this is a minor criticism to what is otherwise another strong showing.

Werwolf’s raspy scream is one of those that is instantly recognizable, and his performance on Aamongandr is consistently strong for the entire album.  The vocals are often layered so that the screams seem to tower over the recording and add to the power and epic feel of the material, and the mix on Aamongandr gives them just enough space from the instrumentals.  It’s an approach that hasn’t changed much from Satanic Warmaster’s earlier days, but it really doesn’t need to when the intensity is there, and that makes the difference here.  I’m also quite fond of the slight deviations to the performance, including the muddled spoken word on “Barbas x Aamon” and the unexpected grunt at the end of “The Eye of Satan”.

Eight years after Fimbulwinter, Satanic Warmaster is back in a big way.  Aamongandr retains the clarity of its predecessor while emphasizing some more epic and symphonic elements that blend in well with the traditional Finnish black metal base.  A few moments drag, especially the final track, but the sheer amount of riffs and sweeping melodies that are infectious in their cold abrasiveness makes this an album that will get plenty of mileage from genre fans.  Between 2020’s The True Werwolf full length and this release, Werwolf continues to deliver material worth paying attention to.  Aamongandr is available from Werewolf Records.