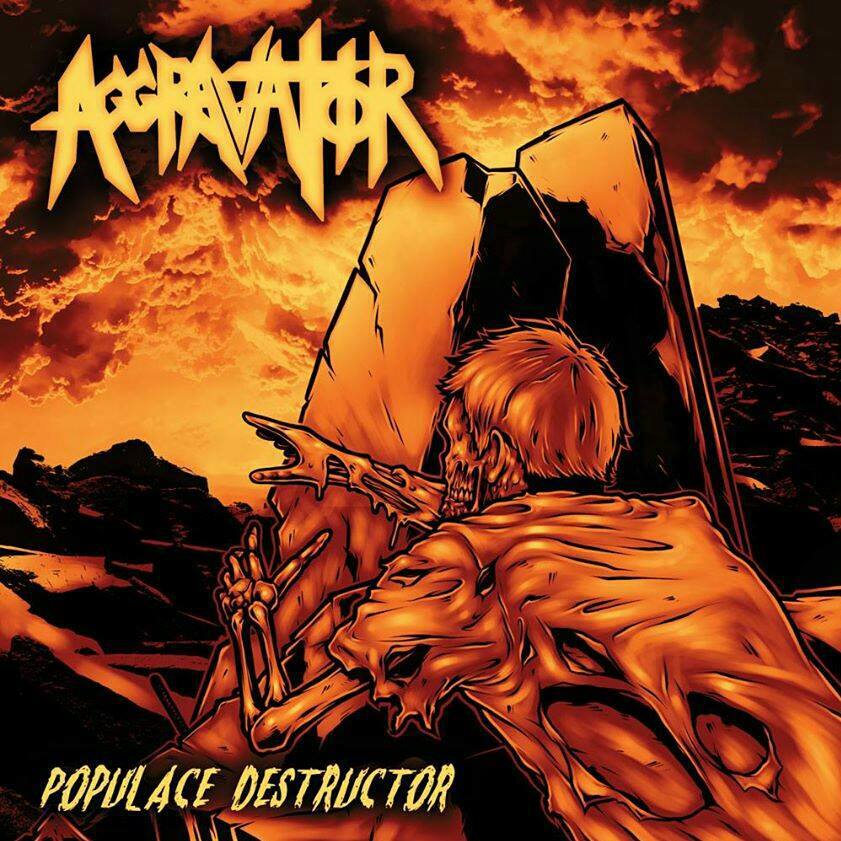 Let's Do the Time Warp Again

Originally released in 2014, the reissue of American old-school thrashers, Aggravator Populace Destructor is already back to melt your face. If you were like me and missed this the first time around, all will be forgiven soon. Reportedly inspired by early Sepultura, Kreator and Slayer, Aggravator are as raw and repugnant as the post-apocalyptic cover art. After years of sharing the stage with the likes of King Diamond, Exodus, Suffocation, and Autopsy, it's time once again to capture the energy in a studio recording.

Populace Destructor is Seasons in the Abyss-era Slayer riffs with deathier vocals. Think later Mille or Zetro. If you have no idea eho either of those people are, first of all you need to hit up google and youtube, but Carcass and even Arch Enemy aren't poor comparisons either. The solos are much more orderly than Slayer, as evidenced right off the bat with "Born in Uniform." Their structures are more melodic in nature, utilzing several techniques including tapping, picking, and sweeps. They're also totally righteous.

Everything else by contrast is an uglier affair. Gritty, headbanging aggression. Without exaggeration, I feel like I've stepped into an 80's time warp. This phonebooth/tardis/delorean has taken me back to a time when just a few names reigned supreme in the genre, and the only way to listen was live, vinyl, or cassette. As "Aestus Mortis" offers a brief interlude to the grimy distortion, I continue to contemplate on how much the industry has changed.

It's a short lived reverie. Back to the seemingly endless stream of gnarly, nostalgic hooks. You gotta love that weird, clunky bass on the title track. It sounds like when my car goes to piss and something metal knocks loose. It gels nicely with that unmistakable Kerry King tone and bumblebee riffing. Another nice solo here as well. Everything about this album is designed to rock your face off. The very deliberate pacing of the drums is impossible for your neck muscles to deny.

Welp, if you were looking for some honest to goodness thrash this year, you've found it. It's not in heavy supply these days, at least not in this pure, unrefined form. But I suppose that facts makes every found gem all the more precious. Check this one out on soundcloud for yourself below.