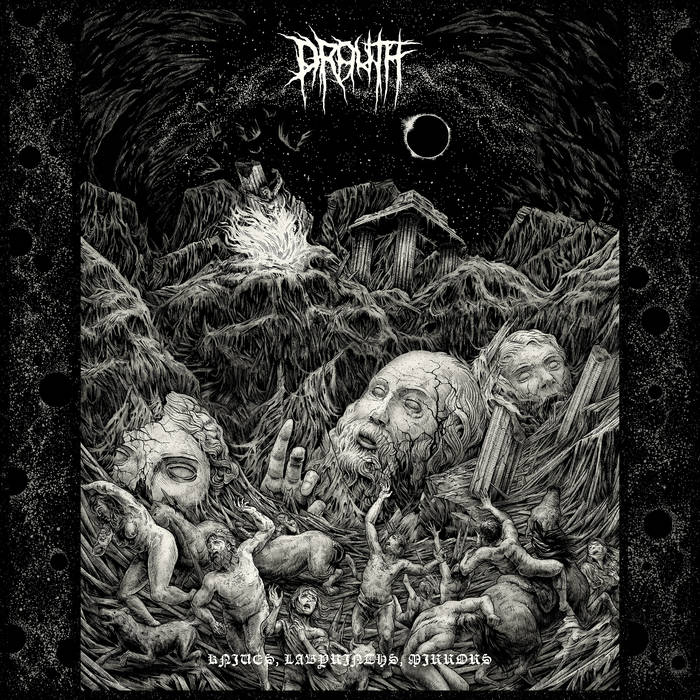 What I Like: Prior to this release, I had pegged Drouth as more of a blackened sludge band, but with Knives, Labyrinths, Mirrors they've integrated fully into West Coast USMB darkness.  This is apparent from the instant that "Horse Crippler" (great f#$king title, btw) cracks this cold one open.  Ferocious, live-sounding blastbeats, abrasive distortion, and some truly impressive snarls all strike at once like a boot to the groin.  Stylistically, this track reminds me of "Path of Broken Glass" off of Abigail William's last album mixed with just a touch of Opeth.  Drouth is hardly a progressive band, but there are certainly some prog elements sprinkled in between the Cobalt-y, warlike chord structures and tremolo runs.

The pacing on this album is also just fantastic.  Most of my favorite sections involve a level of a speed and caustic noise most associated with grindcore, but everything's in its correct dosage.  Just before breakneck drumming becomes tiresome, the band breaks for a Lord Mantis-eque interlude, a ripping guitar solo, or even the occasional Blackwater Park riff.  And despite these shifts, Knives, Labyrinths, Mirrors is consistent as s#!t.  The overall atmosphere reeks of respect for classic BM acts and often reminds me of more recent albums from Taake.  Nothing feels out of place, and yet you get plenty of variety at the same time.  Furthermore, the runtime is perfection.

Critiques: I can't think of a thing to say here.  There's still room to grow in comparison to some of the groups I've been including on my musicianship and innovation lists, but damned if this isn't one of the best black metal albums I have heard all year.

The Verdict: Drouth, you have outdone yourselves.  I really enjoyed the previous EP, but nothing could have prepared me for the massive leap in quality you've made in such a short amount of time.  What you've achieved here takes most bands a few years and several releases.  Buy Knives, Labyrinths, Mirrors right now. You won't regret it.