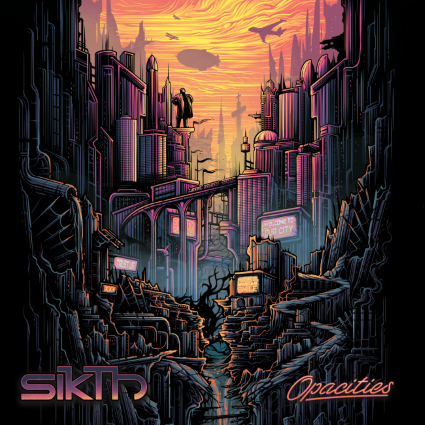 Let me give just a little bit of history to those who may not be familiar with Sikth. They are a 6-piece, dual vocalist band from the UK that hit the underground scene hard with their debut album, The Trees Are Dead & Dried Out Wait for Something Wild in 2003. This was followed up by one of my favorite albums of all time, Death of a Dead Day three years later. Sadly, despite being every bit as talented, they never quite hit the mainstream like Dillinger Escape Plan. And if it were not for a phase in my life where music was mathcore or bust, I would never have come across gems like The Number 12 Looks Like You or Sikth. Things went pretty quiet in 2007, with the group going on a lengthy hiatus. There were glimmers here and there. A show, a comment about new material; but for the most part this seemed like a distant dream. Thankfully, here we are, nearly a decade since their last outing, and now Sikth are back and ready to crush the hype thanks to hard work and a crowd-sourcing campaign.

"Behind the Doors" kicks in the...urm...doors and I am in heaven. The bass, the groove, the technical nerdgasms. I have said it before and I will say it again, Dan Weller and Pin are two of the most under-respected guitar players in the industry. Does it djent? Sure it does, but it's so much more than that. Between the insanity-inspiring noodling, gorgeous chorus melodies, and everything in between; these guys not only set a higher bar for everyone else...they make it look maddeningly easy.

But far be it from me to leave out even a single member of this tightly-honed math machine. James Leech gives his bass a very audible beating, further building the uncontrollable urge to move your body. His performance on "Under the Weeping Moon" is like Angel Dust-era Faith No More meets Primus. Meanwhile Dan Foord engages in his usual endless war against his drum set. I swear this guy is wearing headphones that feed him random time signatures that he has to match on the fly. He never misses a beat.

Finally, you have our two maniacal minstrels, Mikee and Justin. Justin is more or less our master of melody, leading the charge on several soaring choruses. He has a wonderful voice, filled with emotion and with an innate quality that makes you want to sing along, but his more post-hardcore shouted contributions are equally important to the schizophrenic nature of the verses. Mikee, on the other hand, is Mike Patton meets Jonathan Davis. No two performances are exactly the same, and the sheer number of voices he contributes from his trademark warbly howl to spoken word performance (yes, we get another one and it is awesome!) on "Tokyo Lights."

Now, I will address those who I noticed commenting on the debut video calling this "Korncore." I'll admit, I did chuckle a bit since I could hear how someone unfamiliar with the band's other works might hear the thick groove, clunky bass slapping, and Mikee's flawless impression (is it intentional?) of Davis on "Philistine Philosophies" and come to such a conclusion. But as encouragement to both the uninformed and those who stated some concern as to whether Sikth could once more bring the pain, I assure you that this is not only a great contribution to the Sikth catalog and comeback album...it is one of the best EP's of the year.

And so, despite me building a nearly unreachable expectation in my mind over the years about what Opacities should sound like, should it ever be completed, I am wholly satisfied right down to the addition of strings on the closing track. This is another case where when Pin personally responded to my request for a chance to hear a promo, and I finally got to press play, I made like Wayne and Garth: "We are not worthy!" Opacities is available is several formats, you can find quite a few HERE and HERE. This is a must buy. Support the talent and maybe they won't go away so soon!