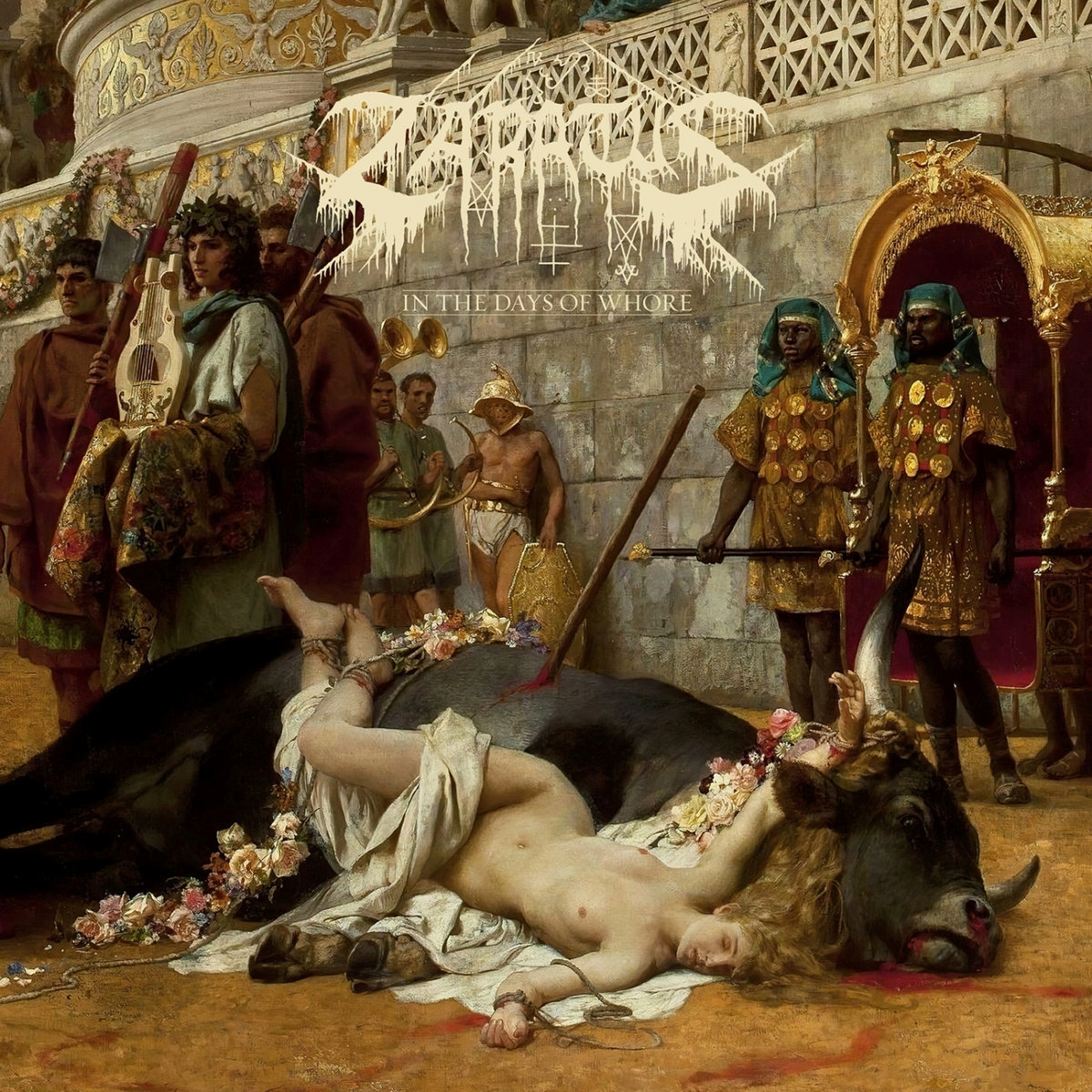 Zaratus - In the Days of Whore (Album Review)

In the Days of Whore
by Zaratus

There’s always been something different about Greek black metal bands, as even in their earliest days many of them were able to channel a mystical and ancient sound that recalled elements of their country’s history and culture.  Zaratus is one of the newer groups seeking to channel this same energy and atmosphere and considering that its two members Bill Zobolas and Stefan Necroabyssious have been around since those early days it seemed likely they could pull it off.  On their debut In the Days of Whore the duo pushes this approach in a more symphonic and classical influenced direction, creating an epically scoped and almost theatrical feel.  While not every element of their majestic black metal fully succeeds, this is still a very promising start that is likely to pull many of you back for multiple listens.

Rather than starting off with the distorted guitar you might expect, In the Days of Whore instead greets you with dark and ominous sounding orchestration that then leads into twisted and melodic guitar work.  Where some Greek black metal over the years has generated a mystical and otherworldly atmosphere that feels like its leading you down into a murky crypt, Zaratus’ bombastic and synth heavy sound instead makes it sound like they’re leading an army of creatures out of said crypt to take over an unsuspecting populace.  The songwriting tends to lean towards the methodical side, with slower rhythms that let the atmosphere truly build taking much of the focus alongside some well-timed blasting.  What drew me in to this album initially was how the synths, saxophone, and other instruments were pulling from a dark yet beautiful tone that utilized a lot of classical and other historical music, which gave the material a unique sound when merged with the more abrasive black metal elements.  Highlights like “The Haunted Palace” sound truly epic and have some heavy metal flair mixed in with the black metal, sounding as though they could be the score to a dark ritual moonlighting as a stage play.  However, despite the strength of the material one area that holds it back for me is the programmed drums.  Perhaps that’s a personal taste and I’m sure it does call back to the early 90s period of Greek black metal, but the programming sometimes sounds a bit off to me and pops out in the mix a little too much.  There are also some passages where the orchestral bits seem at odds with the rest of the instrumentation, which does dampen the impact.

Chances are good if you’ve listened to Greek black metal that you’re familiar with Stefan Necroabyssious’ raspier screams from his thirty years with Varathron or more recent efforts with Katavasia and Funeral Storm.  His performance on In the Days of Whore is just as consistent, as the screams start off raspy and seem to get even more twisted and distorted as the tracks progress until it sounds like you’re hearing something not quite human.  The title track is the perfect example, as when the instrumentation slows down to a crawl and lets the dark atmosphere fester Stefan has a snake-like hiss that hovers over the recording until it explodes outwards into harsher screams.  Despite the number of bands that he’s involved in, you can tell that the same energy is devoted to each one and the performance here gives the material some bite.

With their debut Zaratus has captured that same mystique and darker sense of beauty that a lot of Greek black metal offered earlier on but pushes it towards some heavy metal and classical influences that already make the band stand out.  There’s still some room for the duo to take these ideas even further and in my opinion a real drummer could really help in that regard, but there’s still a lot here that will draw in fans of the style.  I’m very interested in seeing where Zaratus can take its twisted and nightmarish orchestral elements, as that’s a definite selling point.  In the Days of Whore is available from Ván Records.