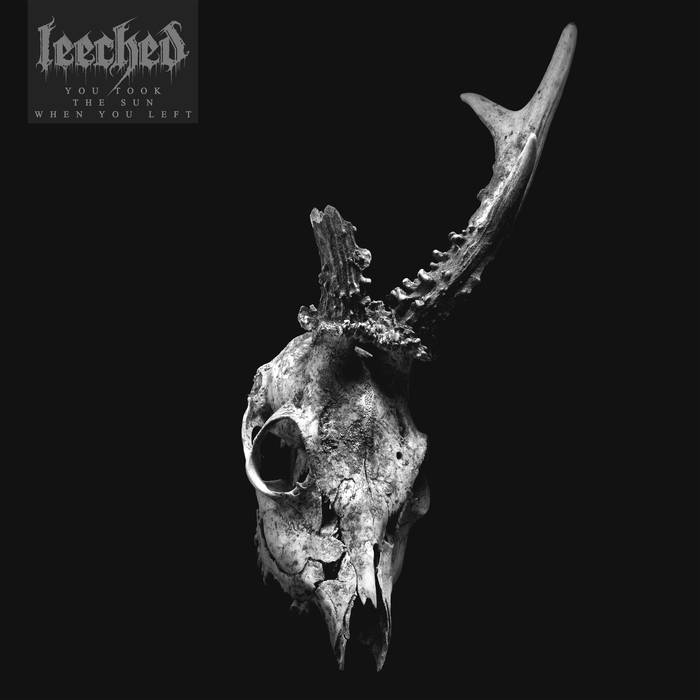 You Took The Sun When You Left

You Took The Sun When You Left
by Leeched

What I Like: What a great title. It perfectly encapsulates the grief and bitterness of the music. You Took The Sun When You Left is less an album than a series of vicious breakdowns broken up by the occasional D-beat. In this way, Leeched perfect the art of blunt force trauma without any distractions. "Cripple The Herd" puts the stank face on from the very beginning, and as if the punchy guitar riffs and brutish vocals weren't enough, the grimy basslines and industrial noises of tracks like "Guilt" will leave you with a receding browline and permanent underbite for sure. Cataclysmic beatdown distortion unites with fevered panic chords to bring down the house, the foundation, and pretty much everything within a mile radius. There's also some doomy noise portions ("Born In Sand") that rival Primitive Man in bleak, oppressive energy.

Critiques: The first half is better than the second. It feels like the longer, sludgier tracks should have been more effectively  interspersed with the short blasts of venom. As it stands, this almost feels like a split release between two different but similar groups.

The Verdict: Anyone remember that live action Super Mario Bros movie? They had machines that could "de-evolve" people into reptiles and apes. You Took The Sun When You Left is a lot like that. My IQ dropped at least 50 points in my first listen...but I'm a happier person for it. Get your dose of Leeched this Friday. Be sure to read this before then...you may not be able to after. STREAM IT EARLY HERE.