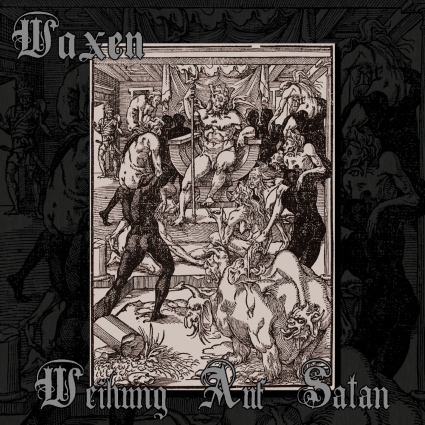 Does anyone else appreciate the sound of second wave BM, but would like a little more variation in the guitar work at times?  If so, meet Waxen.  Guitar virtuoso Toby Knapp (Onward, Where Evil Follows, Godless Rising) has released a new black metal album called Weihung Auf Satan (Dedication to Satan).  The style of this release is being refered to as "shred black metal" due to the emphasis on hooks and extensive soloing.  It's still plenty grim, but in a way that would make Satriani and Eddie Van Halen proud.  As a guitar player myself, I am pleased with the results.

I won't go so far as to say this is truly a new subgenre.  It's not quite so profound.  I hear elements of plenty of bands I have heard before.  Luckily this list of parallels features many of my favorites:  Taake, Burzum, Darkthrone, Murg, and Immortal all come to mind.  The vocals are pure Varg in their grating, violent, devil-may-care delivery always buried in reverb and distortion.  It's enough to certainly turn off those who haven't yet taken the time to acclimate to the greatness of kvlt BM.

Murg is a more recent band that was probably the most forefront when listening to Weihung Auf Satan.  Many of the melodies, the overall production choices, and to an extent the vocals all recall my favorite qualities of what I loved about Varg & Björn.  And Hoest could have certainly written a few of these riffs; him being so fond of alternating mournful tremolos with blasts of rock and roll power chords.  When it comes to the verses and choruses (?), there is enough here alone to attract your fan of the kvlt and tr00.

But I can't conclude this review without discussing the main event: the solos.  You wanted your face melted?  You got it.  "In Harm's Way" may be my favorite, with an intro that is straight out of Malmsteen's "Black Star."  Opening track "Of Black Rain and Ecstasy" (after a delightfully retro moment) fuses what could be a classic Fenriz hook with elements of NYOBHM and other 80's influences.  I have to hand it to Toby, he really did a great job of melding these styles together quite seemlessly.  The guitarwork is tight as a drum in that it exhibits an enormous amount of talent while remaining tasteful and never overstaying its welcome.

I could make one minor complaint in that I think the vocals are a touch too loud in the mix, but in a way it's befitting of a genre meant to scare off the straights.  The frightening qualities of the shrieks help to counterbalance the instant appeal of the guitars.  So all said and done, Waxen is most definitely a project you should check out.  It has something for the black metal crowd for sure, but for those who love both facepaint and a little bit of show-boating this is a must-listen.