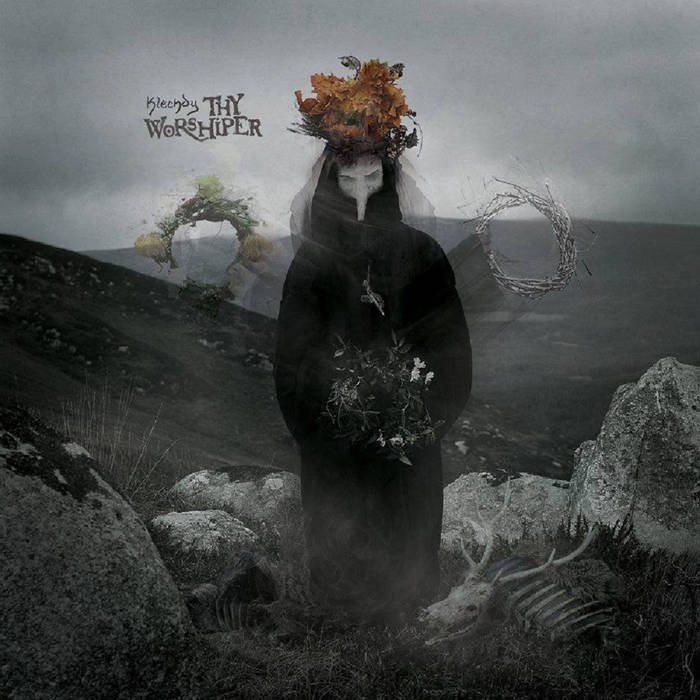 Thy Worshiper started back in 1993 by Marcin Gasiorowski.   The folk metal projected gestated in Wroclaw, Poland before relocating to Ireland and over time growing into a 6-piece band that includes ocarina and jew's harp in addition to your standard guitars and drums.  The new album, Klechdy ("tales"), is a complex and at times unnerving experience; utilizing pagan, tribal, and atmospheric elements to portray the concept locked within. I am chuckling a bit to myself right now, because I just caught a glance at the translated lyrics for "Marzanna."  Upon my first listen of this album, I had considered that despite the darker moments it was overall a very beautiful and artistic representation of various folk influences.  I'm not going to post the lyrics here, but if you head over to the Bandcamp page you'll see there is more than just a little "dark side" to Klechdy.  In fact, things can get a little ugly, which makes me want to know more about the purpose behind this work.

But then again, every time I go searching for the truth, I often come back dissapointed.  Such a work as this feels like it has on some level earned its mystique.  Compositions are grand in scope and always haunting.  And despite the foul language, each word is delivered with a certain power and grace.  Several band members make contributions to these vocals, adding to the already layered experience.  Ululated, Middle Eastern influence dominates the clean singing  in addition to the tempered death growls and group chanting.

And then there is the instrumentation itself, which is often quite breathtaking.  This is almost certainly the type of music that could only be recorded in and inspired by Irish landscapes.  Few city-dwellers could conjure the necessary elements to create such an album.  The mournful strings and harp on "Żywot" are absolutely gorgeous, but the standard instruments have plenty in store as well.  The drumming in particular is outstanding with its primal energy and tribal influence.  "Dziady" has a rhythm that really gets me going.  Despite being the longest track, I was never bored for a second.  The guitars are often reminiscent of Tool's more brooding tracks, though they dabble in post-black tremolo as well as a number of tapping strategies.  And give the bass player a few gold stars, especially for being the driving element behind "Wshody."

All in all, I was caught off guard by Thy Worshiper and this latest album.  It's been a little slow when it comes to good folk music this year, but between Klechdy and the recent Skuggsja album, that might be all we need.  This is music that is simultaneously chill and anxiety-provoking.  There is a certain immediacy and weight to tracks like "Wila" that make me contemplate the pain of the world and what little I am doing about it.  If you think you can handle that kind of pressure, you should pick this one up today.