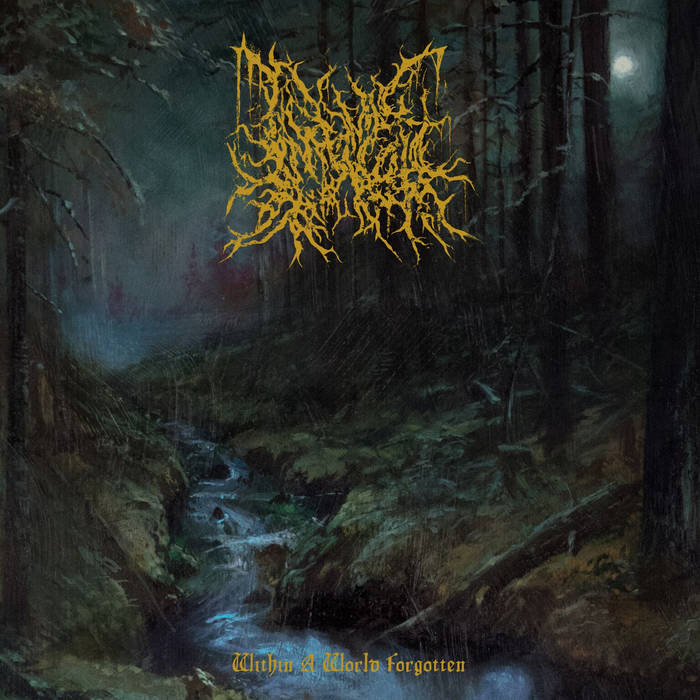 Within A World Forgotten

Within A World Forgotten
by Infernal Coil

Infernal Coil’s made a strong impression with their first two EP’s, delivering an onslaught of hellish vocals and riffs that took equal amounts of influence from death metal, black metal, and grindcore.  For their debut full length Within A World Forgotten, the group has taken all of the elements from their previous material and taken them to completely new heights.  The writing is more complex than the single-minded attack that are so common in these particular variants of metal, and the sound has gotten so overwhelmingly heavy that you may need a few times through to get a feel for all the details.  It’s likely to be a little too dense for some, but for that specific type of listener who likes their metal as murky and destructive as possible Within A World Forgotten will be an album that stands out from the rest.

Spread across seven songs (two of which are slightly tweaked versions of the material from 2016’s Bodies Set in Ashen Death EP), Infernal Coil makes an immediate impression with blasting that feels like it’s going to cave your skull in during the first thirty seconds.  “Wounds Never Close” delivers dense blasting that’s reminiscent of bands like Adversarial as well as deathgrind bands like Vermin Womb.  The recording is absolutely immense, as the guitars blur together into layers upon layers of murky and nightmarish riffing and the drums have speaker destroying capabilities at higher volumes.  While this may all sound a bit familiar, as there have been a number of talented groups that have channeled similar elements over the past few years, where Infernal Coil stands out is in the versatility of their attack.  Underneath the sheer wall of sound there are guitar leads that have a bleaker, murkier tone that channels a good deal of old-school death metal influence, as well as some well-timed breaks during some of the longer numbers that give just enough time to pause and reflect on the aftermath of the destruction.  But what’s most surprising is the centerpiece of Within A Forgotten World, the almost ten-minute song “49 Suns”.  It starts off with blast beats and an ominous lead similar to other parts of the album, but around the halfway point the sound completely fades out leaving acoustic guitar and booming drums in its place.  This is a fairly dramatic shift, but the atmosphere is just as thick and desolate.  It reminds me a bit of the type of unexpected and haunting ambiance Converge utilized on You Fail Me with the song “In Her Shadow”, and it helps to perfectly break up the two halves of the album.

The instrumentals may have some nightmarish qualities, but it’s the vocals that put this material over the edge and make you feel like you’ve stepped straight into Hell.  Other albums of this type may have chosen to bury the vocals under some of the layers of noise, but Infernal Coil has taken the opposite approach and let them tower above the chaos.  The growls are often so low pitched and inhuman sounding that they’re truly terrifying, and that plays a significant role in the album’s appeal for me.  Early on there are some vocal ranges that come close to James Reads’ lower pitches, and there haven’t been many bands that have been able to match the sheer insanity of Revenge’s recordings.

Infernal Coil has delivered one of the most intense and unrelenting albums you’ll hear in 2018.  They’ve taken the blasting and grinding elements from before and weaponized, but there’s enough variation and nuances to the attack to keep the material from feeling one-dimensional.  And just when you think you’ve got everything figured out, the acoustic interlude demonstrates the band’s ability to express desolation and chaos in completely different ways.  Give this one time in order to peel back the layers of noise and grime and you’ll find that it leaves a lasting impression. Within A World Forgotten is available from Profound Lore Records.