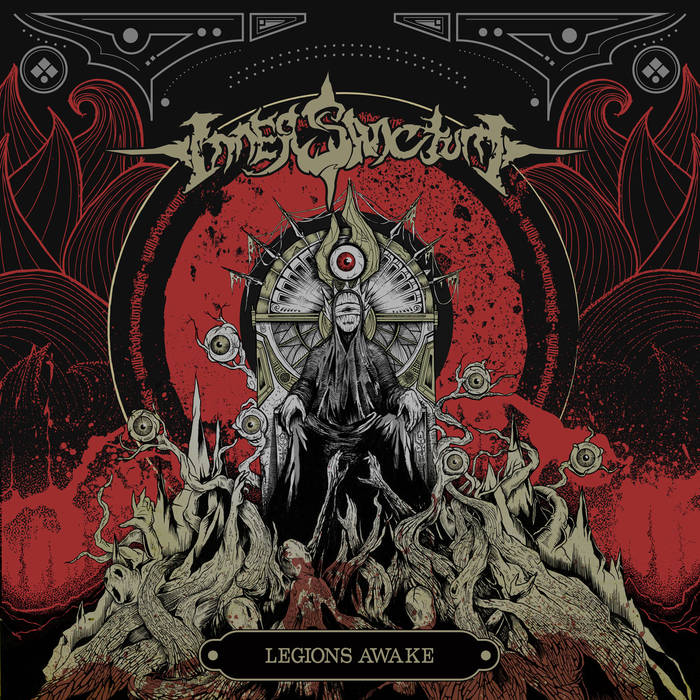 Another excellent, imposing intro.  They are done to death, but a good one still very much gets my motor going.  Such is the case with Inner Sanctum from India.  Fans of death and groove metal rejoice, with guest appearances from James Murphy (Death, Testament, Disincarnate), Christopher Amott (Arch Enemy) and Daniel Mongrain (Voivod, Cryptopsy, Gorguts, Capharnaum), Legions Awake is being called one of the best death metal albums to come out of the region.

If you've pressed play, and you have been following me at all, you probably know where this review is going next.  THE RIFFS!  I'm sorry for my predictability, but my aim has never been to write the best reviews out there.  Rather, my first and foremost goal is to simply get the album out to the public.  With that in mind, you need to taste these hooks.  Sample them, woft them, cherish the notes like those of a fine wine.  "Wake of Destruction" makes this strong point clear from the very beginning, but this is no one-trick pony.  There are plenty more shredding tracks to be had.

I am also quite impressed with the vocals on this release.  They are strong, filled with dominating presence, but are also completely comprehendible to even the average person.  Walking the line somewhere between Anselmo and Lindberg, Gaurav Basu (also the band's artist) sounds like he's commanding an army of muscle-bound, death metal warriors.  Are you pumped?  I'm pumped.  Being a great frontman is equal parts tone and clever placement of cadence, and Basu navigates both of these criteria on an advanced level.

But really, everything about this release is rock-solid.  The songs just come together perfectly between the catchy guitarwork, pounding drums, and grungy bass.  Those who only seek the most experimental and avatagrde need not apply here, Inner Sanctum ain't winning any awards for reinventing the wheel.  But if it ain't broke, don't fix it.  If you are into metal even just a little, I have a feeling you will really like Legions Awake.  Had I heard this earlier, they would have been another band I would have included on my list of bands poised for the mainstream.  Make it happen.