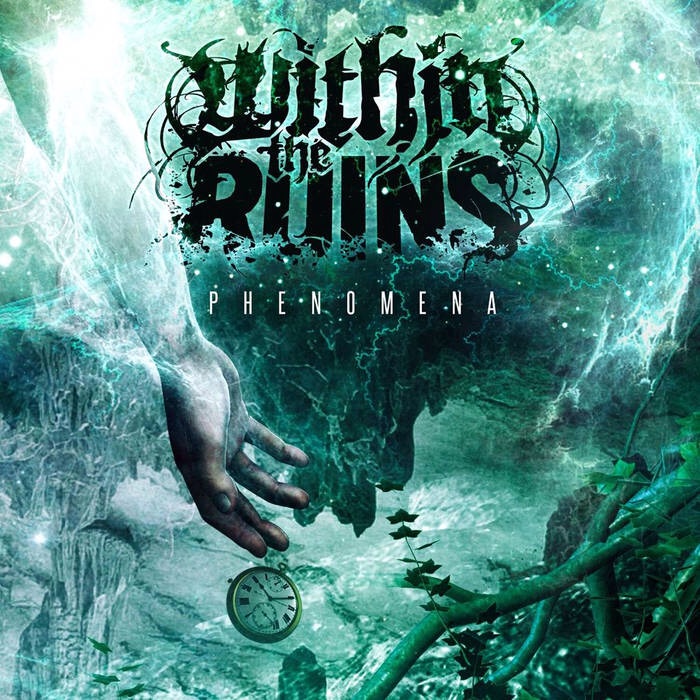 Phenomena
by Within the Ruins

Do you like guitar shredding? How about time signature changes? Comic books? If you answered yes to all three of these, then this is the album for you. There are a number of likely reasons this album flew under the radar in 2014: the dismissive deathcore/djent/metalcore labels, the lack of marketing, the short length of time since their previous (also great) album. Luckily, there is no time like the present to remedy the injustice. Phenomena is a nerdy collection of odes to comic villains and heroes served up via some technical musicianship that rivals that of Dillinger Escape Plan.

Those familiar to Within The Ruins will know what to expect sonically from their previous three outings. Joe Cocchi's guitar work sports a trademark level of condensed distortion that complements its schizophrenic bursts of highs and lows. The fusion of melody with maddening pattern changes brings to mind After The Burial, Meshuggah, Psyopus, Between The Buried And Me, and early solos from All That Remains. Yet despite similarities, one need only listen to the third installment of their "Ataxia" instrumentals to see that this is a monster all of its own.

This frenetic guitar work is complemented by equally challenging drumming and bass-guitar. To simplify, if Phenomena were a featured Guitar Hero/Rockband album, these would be the songs only for the 'LEET. While there is a fairly digital sound in the production of these instruments I tend to avoid, here it somehow complements an overall aesthetic not unlike cyber industrial or even 8-bit. Within The Ruins is the very pissed of ghost in the machine ready to assault you via any device with a wifi connection.

But let me put instrumentation aside for a moment to talk about the most unique aspect of the album: the aforementioned DC/Marvel concept. One could toss off Tim Goergen's metalcore-ish screams as typical lyrical tropes, but a deeper look at each song reveals a level of self-aware, and ultimately clever, dorkiness more in line with Mindless Self Indulgence. The crushing single, "Gods Amongst Men," is a conversation between Magneto and Professor X regarding how they should approach normal humans. Other favorites "Ronin" and "Calling Card" are about Wolverine and the Joker respectively. Everyone from Batman to Phoenix is covered in this album, and this adds an extra level of amusement to the songs that I found to be a breath of fresh air.

Final word: this was a no-brainer purchase for me the month it came out. Every song is killer and the dizzying guitar work is leaps and bounds above anything from the groups they get lumped in with. Furthermore, the chances taken on the lyrical concepts lead to some of my favorite scream-along moments of the year. "CRASH AGAINST HER AND BE BROKEN!" I am simultaneously in awe and laughing hysterically during certain moments, and what could be more fun than that?

Note: this is a repost of my review on Metal Storm.