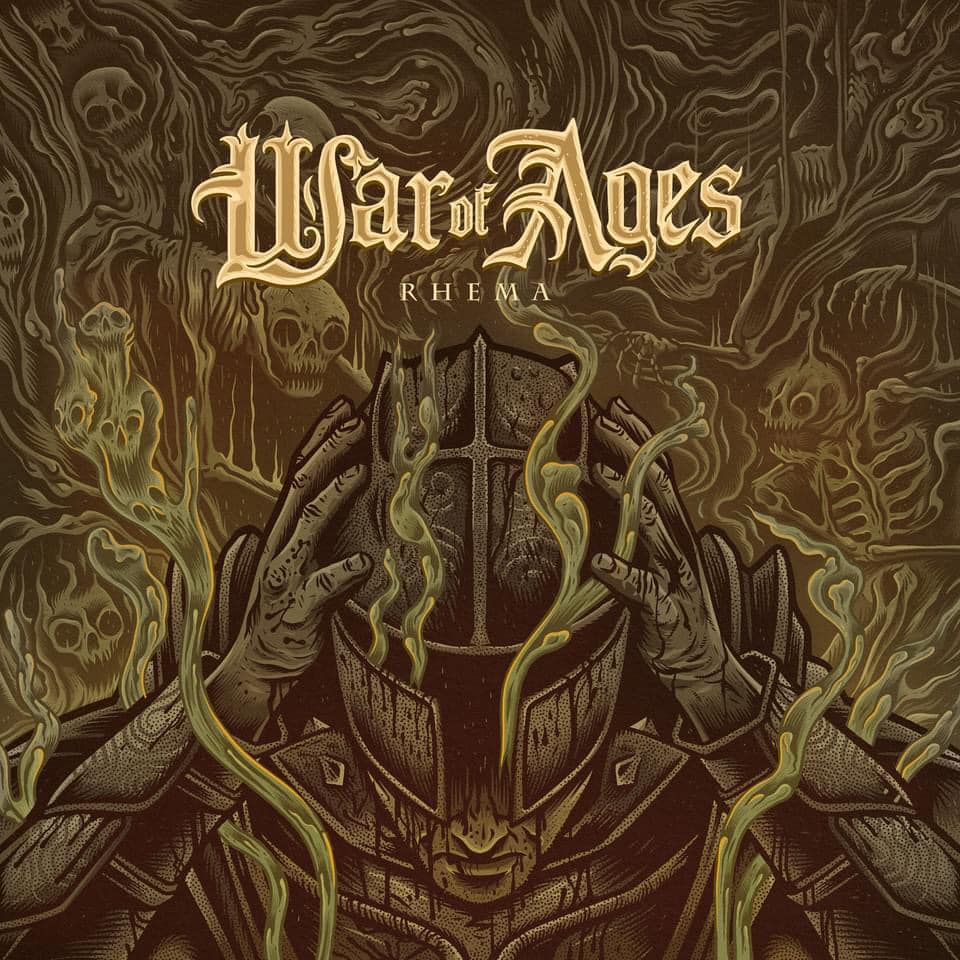 Rhema
by War of Ages

It’s hard to believe that War of Ages is only one year away from their twentieth anniversary, but they have a lot to show for those two decades with nine full-length releases (or eight depending on how you consider the re-packaging of the self-titled for 2007’s Fire From the Tomb).  For me they served as a band that would shape some of my exploration into metalcore, as after seeing them live at a church-run venue in Maryland in high school I dove into the 2005 self-titled and have followed them off and on ever since.  While those early years saw War of Ages going straight up hardcore and melodic death metal, with heavy breakdowns and plenty of shredding, over time they’ve tweaked their formula with singing and lighter instrumentation.  This has been most evident on more recent efforts like Alpha and Void, which explored melodies that could almost throw them into the post hardcore side of the spectrum yet still retained enough of that metallic foundation to satisfy long-time fans like myself.  While 2021 falls into the usual two-year release cycle, rather than put out a new full-length the group has opted for an EP titled Rhema, something they haven’t done since 2004.  It’s a quick listen and continues the alternation between heavy shredding and softer melodies that War of Ages has experimented with recently, but still pushes outwards towards some newer elements that make this a worthy addition to their lengthy discography.

Where some of War of Ages’ earlier albums sound very much like a product of the mid to late 2000s time they were released in with much crunchier drums and a rawer overall production, recent efforts have embraced the direction a lot of other metalcore was heading in and offered up a more polished and room filling sound.  “Sleight of Hand” feels like the type of opening statement that’s great for established fans and newcomers alike, as it starts off with that fast paced and extremely heavy foundation but transitions towards soaring guitar hooks that embrace a bit more of a melodic tone on the chorus.  From there some of the newer elements start to come into play, as “Unspoken” opens with very rhythmic guitar work that has a bit more of an alternative or even math rock vibe, while “No Altars” showcases some electronic elements that add some slight twists on the traditional sound.  The guitars here steal the show, as whether they’re going for more playful rhythms that have some lighter flourishing or are going right into mid-90s melodic death metal shred territory there’s plenty of substance to keep listeners coming back.  The shorter length also works to the band’s advantage as it allows War of Ages to explore some slightly different elements on each song without repeating themselves and given that repetition has plagued some of their discography this works to their advantage.

War of Ages may have embraced a lot more melody and softer elements over their last few albums, but they’ve also been incorporating different singing pitches for quite some time.  In my opinion they didn’t really start to nail this aspect of their music until more recently, as the singing has sounded more confident and started to mesh even better with the familiar screams/growls.  Here the run-time is split evenly between abrasive and clean pitches, and there’s quite a bit of subtle variation to the performances.  “Sleight of Hand” gives Hemp plenty of time to showcase he hasn’t lost any of his power over the past nineteen years, leaving the soaring clean singing for the choruses, but some of the other songs on Rhema give them even more emphasis.  At times it feels like an even split between metalcore and post hardcore, and while there are still a few sections where the pitches didn’t fully click with me and sounded slightly off this doesn’t detract too much from the staying power these songs have.

Rhema feels like a natural continuation of Void, showcasing some additional melodic flourishes and an almost cinematic approach to metalcore at times that works to War of Ages’ advantage.  I can appreciate that some softer elements in both the vocals and instrumentals have snuck in over time as it has given the band a bit more variation, but there’s still plenty of shredding and heaviness to keep the metal side prominent.  It’s not drastically pushing War of Ages into new territory, but this EP offers up four very strong tracks with no filler and that makes this well worth a listen if you’re into metalcore or post hardcore.  Rhema is available from Facedown Records.