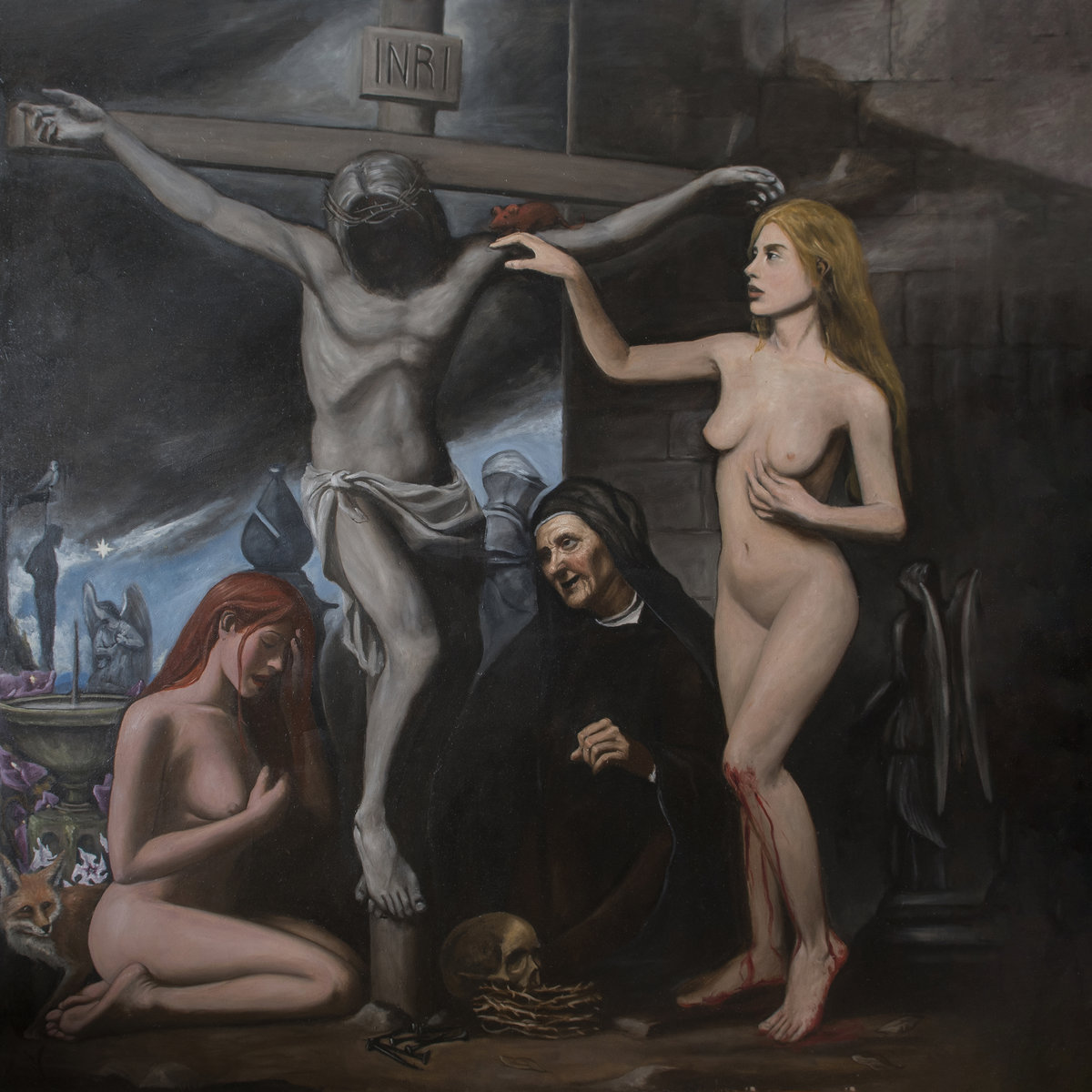 Night of the Desecration
by Wampyrinacht

Like the other influential black metal countries, Greece has had its share of long-running bands that have gone on to influence countless others as well as projects that faded into obscurity only to re-emerge decades later.  Since the early 2010’s Disharmony and Empire of the Moon have released their debuts twenty plus years after their demo and EP days, and Athens based Wampyrinacht would do the same in 2017.  Formed by Necrolord back in 1995, the group only released a demo and EP before fading away for.  We Will Be Watching: Les cultes de Satan et les mystères de la mort represented material written between 1995 and 1999 and recorded in 2000, and while in some ways it reflected the era of its creation it still offered plenty of substance seventeen years later with a mix of melodic and heavy metal leaning black metal.  Necrolord has kept Wampyrinacht going since this re-emergence, bringing Αχέροντας vocalist V.P.Adept onboard starting with a 2020 split, and now we get our first taste of a full-length with V.P.Adept courtesy of Night of the Desecration.  Emphasizing galloping heavy metal grandeur and sweeping melodies alongside the abrasive foundation listeners would expect, it’s another strong showing of Greek black metal.

There tends to be a few distinctive types of black metal when it comes to Greece, as some groups emphasize the mystique and grandeur through symphonic elements while others let the guitar take the focus.  Wampyrinacht leans towards the latter, and while there are keyboards on Night of the Desecration that help to enhance the mystical and otherworldly tones, the powerful, galloping riffs and rhythms are what is likely to stand out the most to listeners.  The songs here build up methodically with layers of instrumentation that establish a sense of might and power through mid-tempo passages before expanding outwards into blasting.  “Thorns for my Damnation” reminds me of what I like about Greek black metal the most, as it quickly establishes a sinister and darker tone that has the jagged edges of the genre but transitions over to the triumphant, galloping rhythms of heavy metal a few minutes in.  There are some melodic elements placed over top of this, but the crisper production recalls the band’s origins and retains some rawer aspects rather than polishing things too much.  The eleven-minute title track continues to be a highlight for me, as not only does it move seamlessly between the black and heavy metal sides of the sound but there are some leads that have a more psychedelic and progressive slant to them which stands out upon repeat listens.  Admittedly the songs do tend to run just a bit too long, and the decision to close Night of the Desecration with an extended instrumental and another outro dampens the impact a bit which does make the first half stand out more overall.  Considering that the bulk of the album was written between 2000-2003 and the prologue and epilogue weren’t added until 2019 they do seem a little superfluous.  But I’ve still found myself putting this album back on regularly as the way the compositions balance the abrasive, powerful foundation with haunting melodies remains enticing.

V.P.Adept may have taken over on lead vocals, but Necrolord does still contribute some vocal work and has also written all of the lyrics and monologues that appear throughout the album.  It’s clear that the Αχέροντας front man fits what Wampyrinacht is going for perfectly, as he delivers that familiar raspy scream that seems to tower slightly above the instrumentation and adds to the overall mystique of the material.  Each verse is fairly spaced out, and this allows for plenty of variety between each appearance.  Sometimes you’ll be met with raspy screams and lower growls, while other times will bring monologues courtesy of either the band members or guest vocalists.  The way the vocals are structured helps to drive the narrative forward and adds a bit more depth than is typical for the genre.  Even when Wampyrinacht allows the vocals to get as harsh and in your face as they can on songs like “The Church of Thorns” there are still spoken word passages to break things up, and this allows the performance to consistently grab you from beginning to end.

Though fine tuning may have occurred over the past few years, the roots of this album go back nearly twenty years and make it a natural follow-up to the ideas that Necrolord developed on Wampyrinacht’s debut.  There are some moments that come across as a little long winded and the two instrumental pieces that close out the album do make it fade out rather than finish strong, but there’s still plenty to keep listeners coming back.  Necrolord’s band does the triumphant and melodic elements of Greek black metal extremely well, and I’m curious how much other material he has written just waiting to get out there.  Night of the Desecration is available from Iron Bonehead Productions.