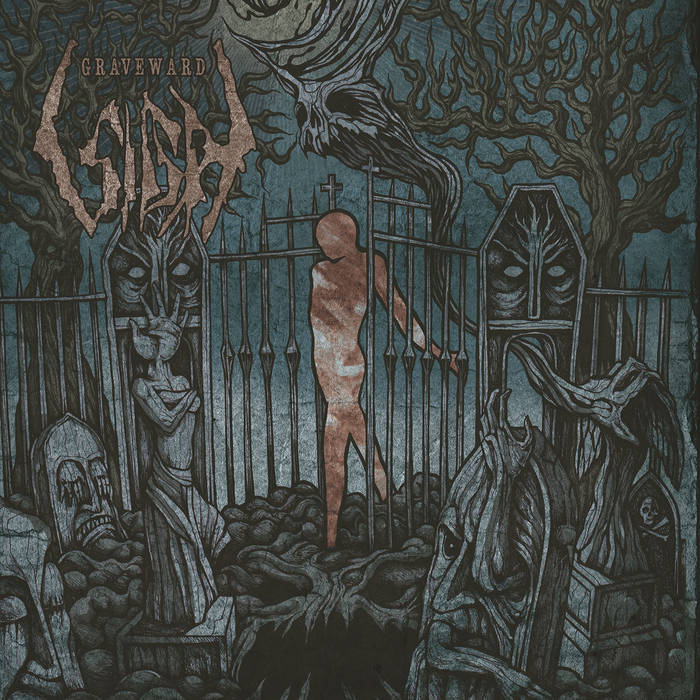 Let's cut to the chase: this is some weird, wild stuff. Heavy metal, brass-heavy symphonics, black metal, occasionally 80's thrash-sounding hooks, neo-classical solos, JPop, saxophone solos...This has a little bit of everything, and you never really know when or where it is going to happen. "The Tombfiller" is a great example of just how well Sigh manages to tie all of these elements together into a deliciously enjoyable chaos. I am truly in awe of these compositions.

Given its tendency to change drastically on a whim, trying to give an in-depth description of Graveward's sound is no easy feat. One might best compare it to a piece of modern art: No matter how off-the-wall the end result might be, every painting needs a canvas and every sculpture a structurally-sound foundation. Sigh's is crunchy, squealy riff-driven guitar work, black metal vocals, and some pretty basic drumming.

That in place, Sigh proceeds to fling paint and slap clay like Jackson Pollock. But not unlike the artist, no action is haphazard. Take the first single, “Out of the Grave” for instance. On the surface the middle-eastern instrumentation, baroque horn flourishes, back-up vocals, and sax seem to be a nihilistic romp through the avant garde. But repeat listens reveal a detailed order to the various movements and changes. In fact, the carnival-like facades often conceal a traditional (and catchy) rock structure.

I have only one major complaint about this album: the production is constantly bugging my ears. It most closely reminds me of Nokturnal Mortum's Nechrist. Various parts seem to slide back and forth in the mix. Vocals will become overly loud while drums and guitar become muddy. Most sinfully, the gorgeous brass and synth work lack depth. Such masterful ordering of chaos deserves an organic space to work in rather than being trapped in the 2 dimensions of the phantom zone.

Final word: one of the most equally innovative and enjoyable albums you will hear in 2015. Furthermore, Graveward is a step up from previous albums in both scope and consistency. While some groups in the avant garde camp are happy to be weird for the sake of weird, Sigh makes the argument that the bizarre need not be inaccessible. Much like Leviathan's Scar Sighted, Graveward has earned Sigh a new fan through mastery of the unconventional. Stream it on Bandcamp now.