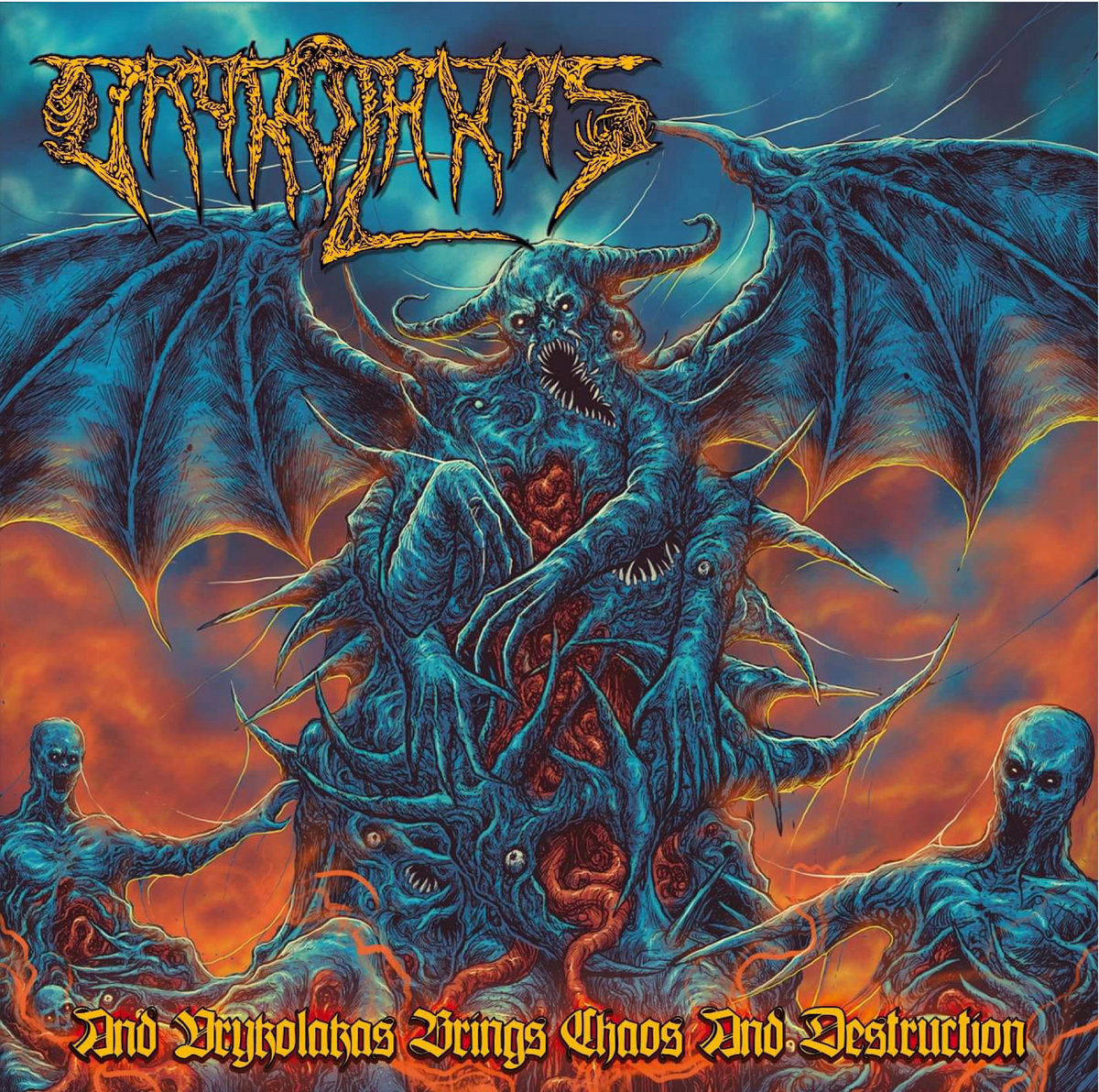 Singapore has its fair share of black and death metal bands waiting to be discovered, but when it comes to ones that have had international exposure most of you probably think of Impiety, Rudra, and Abhorer.  Another long-running group who’s gone under my radar is Vrykolakas, formed back in 1991 as a black/death combination before transitioning to straight-up death metal later in their career.  This year’s And Vrykolakas Brings Chaos and Destruction is their third full length alongside a slew of smaller releases, and it showcases their methodical and groovier take on the genre that’s sure to bring quite a few old-school American bands to mind.

Coming in at just under fifty minutes, Vrykolakas takes their time to let their darker atmosphere fester and the brutality to come through in their music.  Rather than going full speed with blast beat after blast beat like a lot of old-school death metal tends to, the songs here favor a combination of slower, methodical grooves and some faster sections that whip things up into a more violent and destructive tone.  This approach is bolstered by strong production values that allow the drums and guitar leads to come through as Earth shaking rumbles, reminding me a bit of more recent albums from the likes of Vader and Deicide.  The instrumental work also brings some of the slower tracks from Deicide and Immolation, as well as a little Nile, with the drums often standing out thanks to how rhythmically diverse they are.  Rather than simply going for the standard death metal patterns, drummer Edi is constantly switching things up with different grooves and fills that stand out upon repeat listens.  Songs like “Yajuj Majuj Versus The World” excel at this, with the grooves of the guitar and drums working in tandem to maximum effect.  It also sounds at times like some of the rhythms and guitar leads have a bit of traditional East Asian musical influence, though this is subtle compared to other bands that use acoustic interludes or other elements.  The one main flaw here is that some of these songs are just a little too long for my taste, as some of them stretch out these ideas for a bit longer than they need to and that causes them to lose their impact.

Vrykolakas uses a lot of layering when it comes to their vocals, allowing for some truly twisted and nightmarish passages over the course of their album.  The main pitch is a lower pitched growl that’s got some raspy and guttural qualities to it, but is still delivered in a way that makes it easier to make out the lyrics compared to much of the genre.  From there some shrieks and screams are layered over this main pitch for some demonic and inhuman sounding sections, and while you’ve definitely heard this approach before there’s a rabidness to the performance that is a little less common.  There continues to be something about death metal bands from countries like Singapore, Malaysia, and Indonesia that bring a level of intensity to their vocals that is hard to match in other regions.

The Bandcamp page for this album mentions that five of these songs date back to 2010 when the band first attempted to record this material, with it being shelved and re-worked a decade later alongside three new ones.  But regardless of their origin, this is some polished and heavy hitting death metal that takes a more rhythmically diverse approach to the genre.  It’s still a bit too long and sometimes comes through feeling slightly bloated, but I’ve still found myself wanting to give this one repeat listens over some of the other death metal that’s come across my desk recently.  With a little bit of trimming, I could definitely see album number four being a true heavy hitter and hope Vrykolakas get a bit more attention from here on out.  And Vrykolakas Brings Chaos and Destruction is available from Dark Blasphemies Records and Sadist Records.