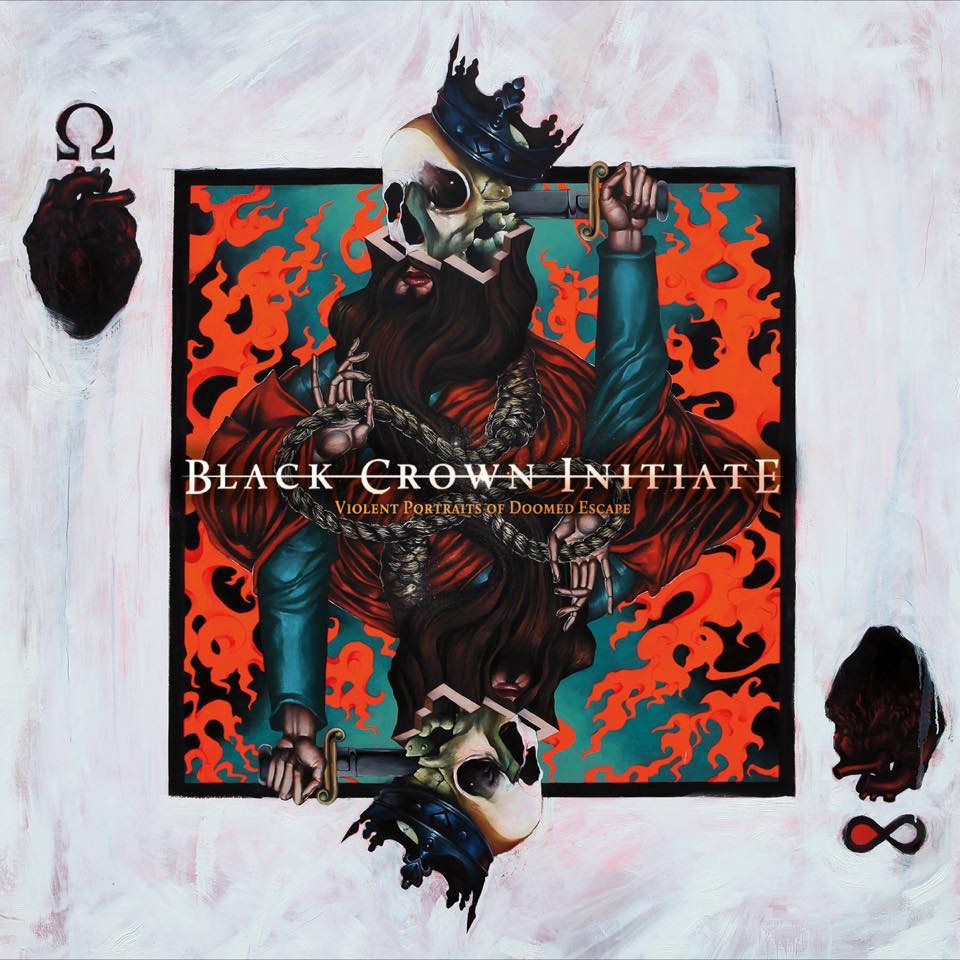 Black Crown Initiate has been merging elements of technical and progressive death metal since their creation in 2012, sometimes being compared to Opeth’s earlier days while still forging their own path with each release.  In the years that have passed since their last full-length Selves We Cannot Forgivethe band has gone through some lineup changes, with two guitarists and drummers cycling through and original guitarist Ethan McKenna returning to the fold.  Although shifts of this type can sometimes be cause for alarm, with the core trio still in place Black Crown Initiate has returned with Violent Portraits of Doomed Escape which takes all their existing elements and pushes them to the next level.

From the very beginning this band has worked to merge dense and brutally heavy death metal with much lighter progressive instrumentation that pulled listeners in a variety of different directions.  Violent Portraits of Doomed Escape follows suit but balances these two halves better than ever before, with the opening track “Invitation” serving as a great example of just how diverse the instrumentation can be.  This song starts off with somber acoustic guitar that builds for about a minute or so, leading into harsher guitar and bass riffs that suddenly amp up the heavy.  When Black Crown Initiate decides to go full throttle and touch upon both modern death metal and hints of that Meshuggah-like chug, they’re just as dense and powerful as anyone else out there.  But it’s the melodies and transitions that are woven in that make this album so appealing, as the warmness of the guitar tone during these moments and the soaring nature makes these passages stand out just as much as the brutal ones.  As is typical for progressive or technical death metal, it’s likely to take a few listens to start to get a feel for all the details, as there are a lot of changes in tempos and unexpected rhythms that stand out more with each time through.  But Black Crown Initiate hasn’t forgotten the importance of strong songwriting, as their songs take listeners on a journey that has a distinctive flow from beginning to end rather than simply coming across like a string of technical riffs that don’t fit together.  These guys have nailed the fine line between accessibility and complexity, giving them quite a bit more reach across the metal fan base than is typical.  It’s also worth mentioning that the tweaks in production have really made Violent Portraits of Doomed Escape pop, as while there are still dark and crushing moments the instrumentation feels a bit fuller and the melodic aspects stick out more than ever before which makes a significant difference.

I have to admit that when I saw this group live shortly after the release of The Wreckage of Stars, I wasn’t fully sold on the ratio of singing to screaming.  Something about the cleaner ranges just felt a bit off, but clearly in the years that have passed Black Crown Initiate has continued to focus on this element and improved it significantly.  On this album James Dorton’s guttural growls and harsher screams are balanced equally with Andy Thomas’ singing that soars over top of the recording, and both are able to generate an immense amount of power despite getting there in completely different ways.  Thomas still has a voice that gives off a bit of an alternative rock vibe at times, switching up the dynamic from other bands of this type, but he switches things up regularly and some of the choruses have gotten stuck in my head almost instantaneously.  This is the type of performance that I had hoped for from the band the first time I heard them, and they’ve really taken every aspect of their vocals to the next level to ensure that they bludgeon and soothe in equal capacity.

This album may not drastically reinvent what Black Crown Initiate is doing, but every element has been enhanced and the ambition of their songwriting continues to stand out.  Unlike other groups that add progressive and technical riffing into death metal, there’s a clear focus on narrative and hooks which makes each song grab the listener from the get-go while providing complexities to bring them back.  It’s a refinement of everything the group has worked towards over the past seven years, and while I bounced off a few of their previous efforts this album hasn’t left my stereo in a few days.  I’m impressed, and it’s exciting to see a band like this unleash what they’re truly capable of and deliver a highlight of the year in such a crowded environment.  Violent Portraits of Doomed Escape is available from Century Media Records.