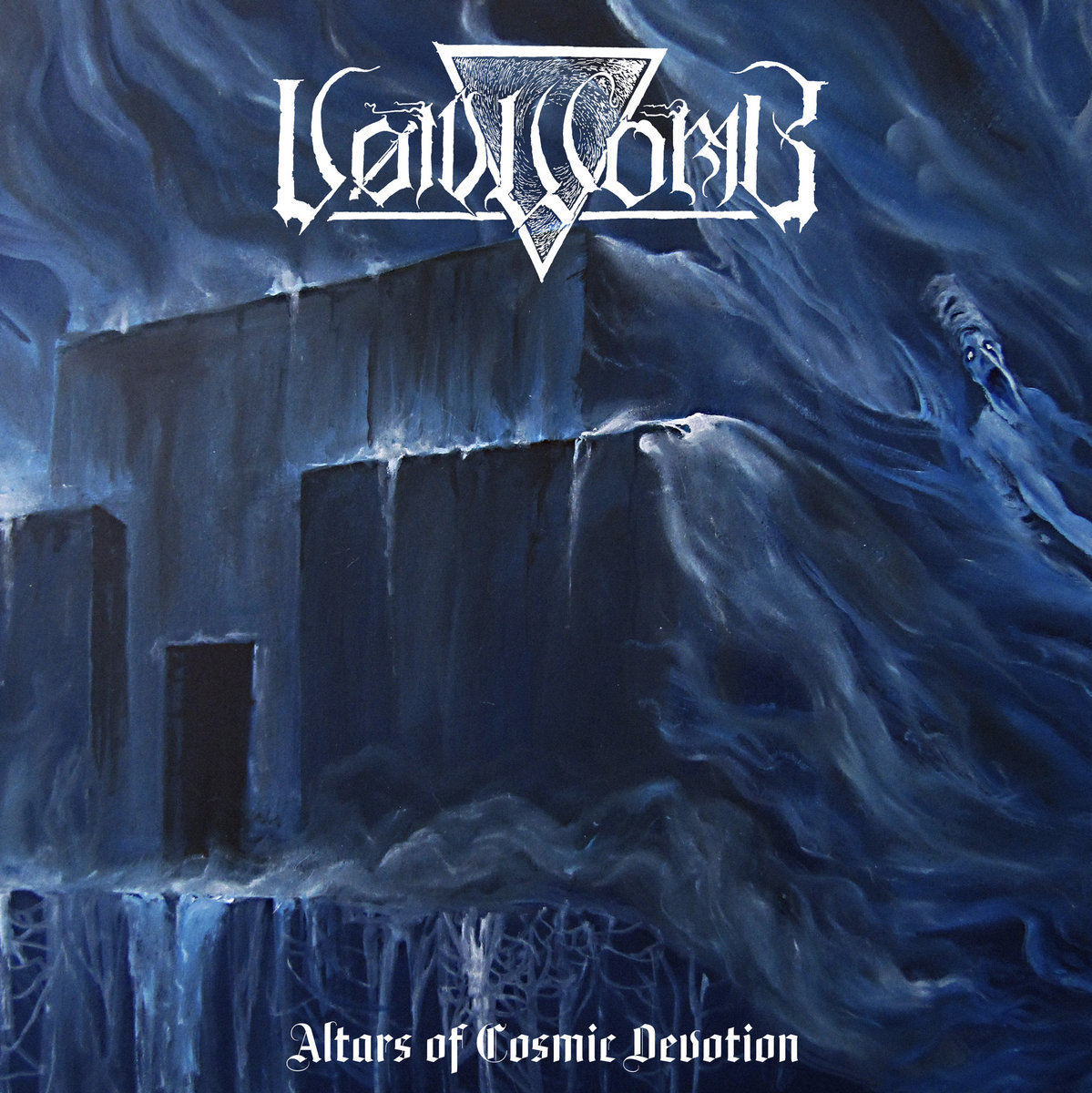 Altars of Cosmic Devotion
by Vøidwomb

While not always mentioned as frequently as the Scandinavian countries, Portugal has been responsible for quite a few stand out bands in both black and death metal.  One of the newer entities to emerge from there is Vøidwomb, who showcase blackened death metal on their debut EP Altars of Cosmic Devotion that spends just as much time on slower and methodical riffing as it does blasting the listener into oblivion.  Although the band pulls from some familiar territory and is still developing their own style, this is a promising start that displays a bit more polish and precision than one would expect this early on.

Rather than launching immediately into blast beats and chaotic riffing like a lot of newer bands, Vøidwomb takes their time with a methodical intro that establishes a sinister atmosphere and lets it spread outwards.  It’s not quite at a death/doom tempo, but there is a noticeable build-up before the instrumentalists unleash their denser assaults at listeners.  When the material speeds up there are hints of earlier Belial and Deicide in how dark and brutal the riffs are, but when they slow things down and get a bit murkier the rhythmic approach brings some of the Hellenic black metal bands from the 90s to mind as well.  What’s notable about Vøidwomb at this early stage is their equal focus on riffs and atmosphere as well as the quality of the recording itself.  It’s not uncommon for black/death metal to be so dense that it thrives on the murkiness and sheer density over memorable riffs, but there’s a clear emphasis here on providing substance with each song shaking things up a bit and the production providing just enough clarity without sacrificing power.  Admittedly despite the songs standing out individually they do sometimes fall a little too close to that 90s blackened death metal template, with “Descent to Ersetu” and the title track being exceptions thanks to some haunting melodies that are placed over top of the pummeling foundation.

The vocals are another area where Vøidwomb makes a strong first impression, as the performance merges low pitched growls and raspier screams that consistently up the level of intensity.  In this regard the band splits elements of black and death metal fairly equally, and the regular switch between the highs and lows makes the material feel a bit more dynamic than is sometimes typical for these genres.  When M.S. Void uses raspier pitches that echo off the recording it has some of that same eeriness as Mystifier but the gutturals bring things right back to death metal.  Where the vocal work on some albums of this type can feel like an afterthought, after repeat listens it’s evident that just as much thought has been given to making the performance as dynamic and lethal as possible on Altars of Cosmic Devotion.

Vøidwomb’s more methodical take on blackened death metal reaches some truly powerful heights, and while they haven’t fully found their own take on the established style the hints of Hellenic black metal type atmosphere do start to differentiate their ideas.  Considering that the group already has a knack for writing actual riffs instead of relying solely on density and atmosphere that should serve them well, and it seems likely by the time we get more material that they’ll be able to truly stand out from the crowd.  Altars of Cosmic Devotion is available from Iron Bonehead Productions.