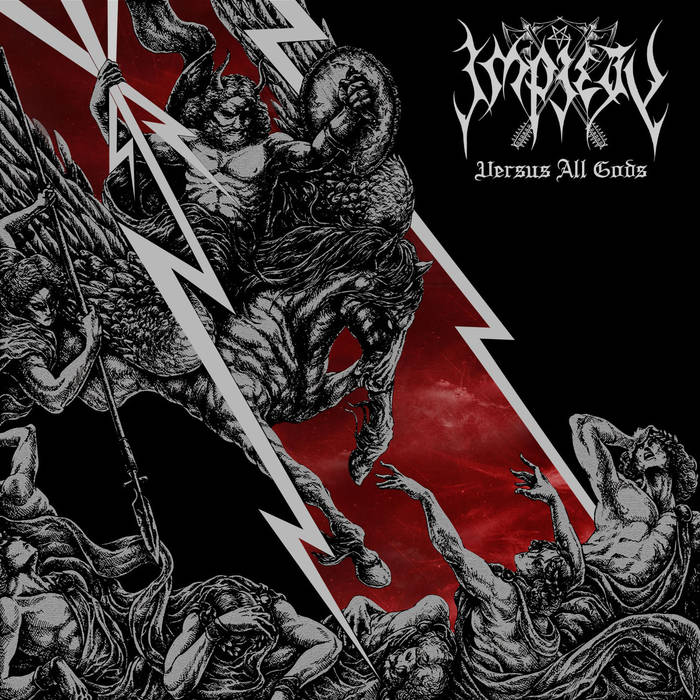 Versus All Gods
by Impiety

Aside from a few split contributions, long running black/death metal band Impiety has been quiet for several years which is surprising given how sizable of a discography they put together over the prior two decades.  Since the last proper release from the band (2013’s The Impious Crusade EP), band leader Shyaithan has recruited two new guitarists and this new incarnation has returned with Versus All Gods.  Despite the lengthy gap it’s clear that Impiety’s relentless, warlike sound hasn’t been dulled and there’s plenty of old-school riffing that will catch the attention of any fan of the genre.

In typical fashion for the group, Versus All Gods starts off with an orchestral introduction that sounds like it’s preparing listeners for all-out war.  It’s the type of intro that gets you appropriately amped up for the coming onslaught, and Impiety certainly doesn’t disappoint when the distortion and hellfire kicks in on “Reigning Armageddon”.  For those who have yet to come across the group yet, they pummel with relentless drum beats and riffs that channel equal amounts of old-school black and death metal, with very little of the material giving much breathing room.  This time around the production is a bit beefier which makes the drums have more weight and the album as a whole is bottom heavy enough that it feels like it could cave in buildings.  Stylistically there’s a bit more death metal to the writing at times, and where some of Impiety’s previous discography fell into repetition far too quickly the riffs come through as more versatile and it’s easier to tell some of the individual tracks apart.  Shyaithan may not have deviated that far from what he’s been known for over the decades, but the instrumentals remain as scorching and destructive as ever and the added variation makes the material some of the most potent the band has put out in recent memory.

Shyaithan has a vocal style that’s become recognizable over the years, as his screams are fairly raspy but come in at a lower range than some of the others out there.  It’s the type of pitch that adds a jagged edge to each of Impiety’s albums, and here it stands above the destruction with a menacing presence.  It’s often enunciated in a way that makes the lyrics easier to decipher when compared to your average black/death metal band, and that definitely adds to the appeal.  Admittedly Shyaithan has never had as wide of a range when it comes to screams and growls as some of the other vocalists out there, but his level of intensity and the rawness of the performance continues to work to the band’s benefit.

They may have been quieter for a longer period of time than in the past, but it’s clear that the longer incubation period has allowed Impiety to come back at their strongest level.  It may not deviate significantly from the path the band has blazed for three decades, but when the songs pummel you senseless and leave you wanting to come back for another round the familiarity isn’t a bad thing.  Versus All Gods is available digitally from Shivadarshana Records and on CD/LP from Evil Dead Production and Hells Headbangers.