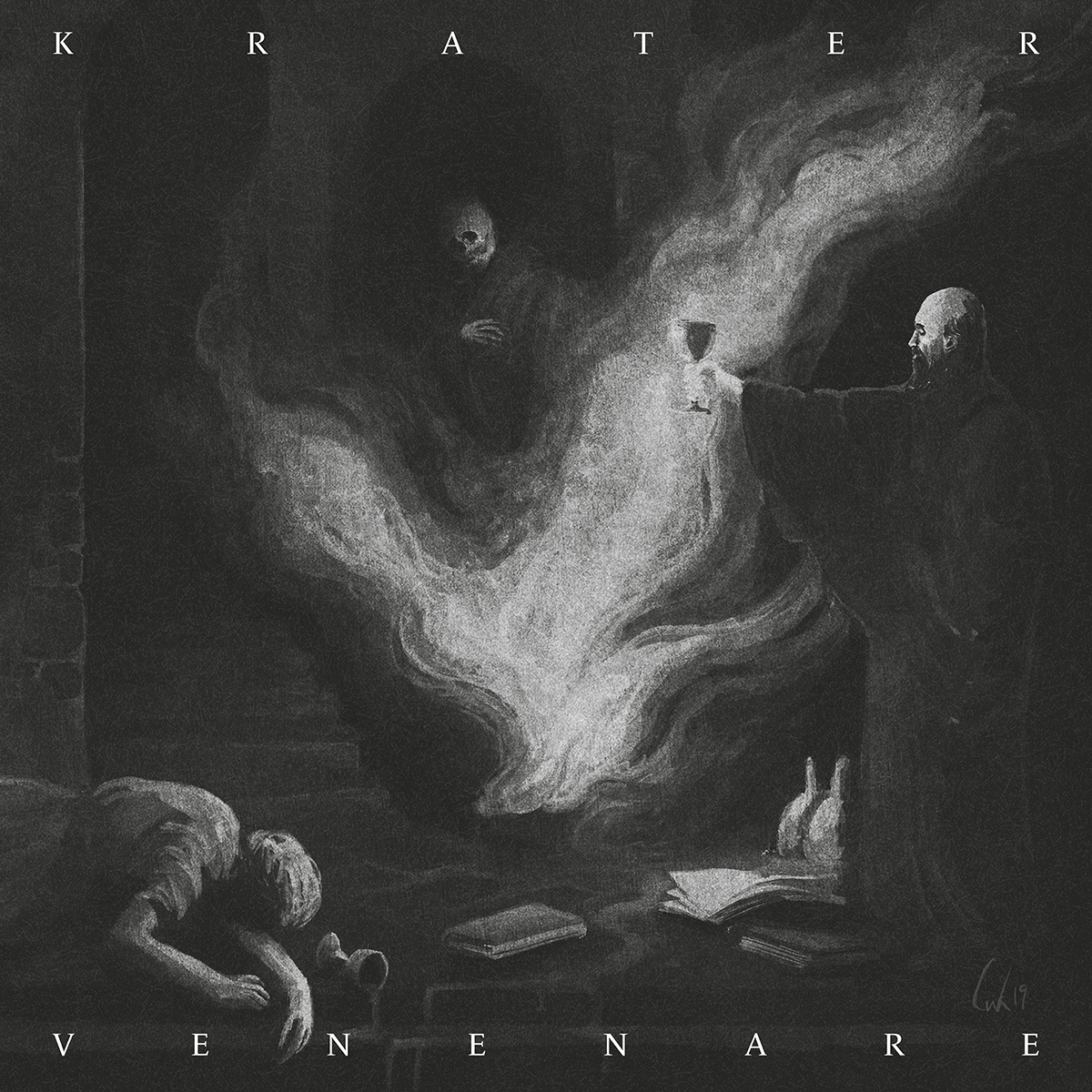 While German black metal band Krater has been around since 2003, it wasn’t until the release of 2011’s Nocebo that they came to the attention of a wider audience.  Where their earlier efforts had gone for a more traditional style Nocebo and itsfollow-up Urere pushed the sound outwards towards grander and varied writing, making it clear this was a band that was just as interested in pushing themselves outside of the genre’s usual constructs while still paying it tribute.  This year’s Venenare continues this progression with an emphasis on slower, brooding melodies that get wash over you alongside the icy blasting one would expect from black metal.  It may not have as immediate of an impact on listeners as its predecessors but given time to discover all of the layers there’s plenty to Krater’s latest effort that will stick with you.

Urere had its share of slower, melodic passages but overall placed an emphasis on fast and violent riffing that went right for the throat.  Venenare by comparison feels a bit slower paced and methodical, as while “Prayer for Your Demise” starts things off on a more aggressive note as you get further into the album and the song lengths increase the instrumentals shift the focus over to an ominous, unsettling atmosphere.  “Zwischen den Worten” and “Darvaza Breeds” are perfect examples of this, as the effects the band weaves into these songs create such a dark and enveloping tone that it feels like you’re going to suffocate in their layers.  There’s a lot more happening in each track compared to some of Krater’s past efforts, and the longest ones provide enough twists and turns to justify the longer spans of time.  With the blasting toned down slightly and kept for key moments Venenare does take a bit more effort to sink your teeth into as there isn’t quite the same immediacy as its predecessor had to offer, but once the spine chilling melodies get their hooks in you’re likely to find that this album keeps working its way back into your memory.

The instrumental work isn’t the only aspect that has pushed outwards towards new horizons, as the vocals have also followed suit and incorporated an even wider range than before.  While the harsher screams and growls still encompass a significant amount of the album there’s a larger emphasis on clean ranges in the form of both chanting and singing.  This approach makes sense considering the methodical, atmosphere driven writing the band has utilized this time around, and for the most part it works in their favor to create some breathtaking moments.  But there are also a few passages that feel a bit uneven and the singing doesn’t come through strong enough to provide the maximum amount of impact.  There isn’t anything outright bad about the performance, but it does stand out on repeated efforts and is something I’d like to see the band continue to experiment with in the future to see if they can take it to even greater heights.

Krater’s pushed themselves into new territory with Venenare, emphasizing the haunting and nightmarish atmosphere more so than ever before.  Some of their past viciousness and icy chill remain, but as a whole this is a very different album that takes its time to pull you in and provides more twists and turns than one might initially expect.  There are a few elements that could be further refined down the road, but as a whole, Krater remains just as captivating as before and they’ve achieved that fine balance between the abrasive and melancholic  Venenare is available from Eisenwald.