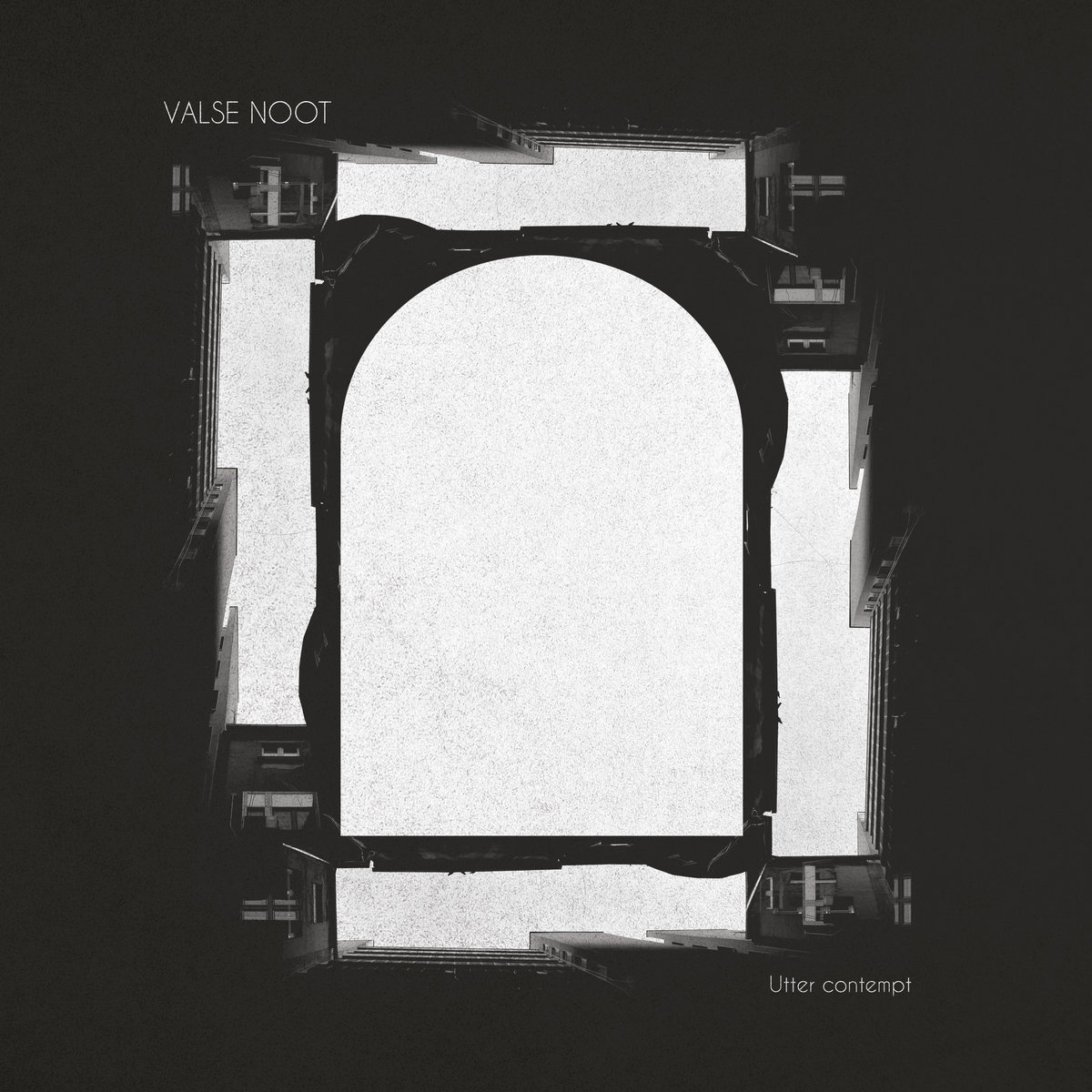 While noise rock was generally associated with the United States in the 1990s, in recent years France has seemed to be the country to go to for the genre.  More recent examples that I’ve reviewed like Watertank and Untitled With Drums have started to incorporate a bit more alternative rock and even some grunge, but Brest’s Valse Noot keeps things firmly rooted on the jagged and experimental on their latest album Utter contempt.  It’s a quick half hour listen that consistently hits you with off-balance and noisy riffs but offers some substance underneath that will keep those who like their rock a little weird coming back for more.

Dubbed as “free noise rock” on their Bandcamp, this description seems appropriate for Valse Noot as the songs on Utter contempt feel very fluid and are able to transition between tempos frequently.  Stylistically it reminds me of The Jesus Lizard, Big Black, and Arab on Radar crossed with a little bit of the weirdness of Frank Zappa, with a little bit of post hardcore circa the 90s thrown in for good measure.  Where some of the other French noise rock I’ve received to review over the past few years has adopted a bit more melody and alt-rock influence in between the angular riffs and abrasive tonality, that’s not the case here as with the exception of a handful of passages Valse Noot keeps things as abrasive and in your face as possible.  Sometimes there’s a slight post punk influence as well, but the fluidity of the song structures keeps things firmly on the experimental side of the spectrum.  This type of consistently abrasive rock has always proved to be an acquired taste, but if you’ve spent any amount of time with the aforementioned bands you’ll find a lot to like about Utter contempt.  Rather than just letting guitar and bass dominate, the keyboards also play a prominent role throughout the album with songs like “Hereditary” and “Story of a Decadence” almost entirely written around the moodier synths.  It’s a whirlwind from beginning to end, and despite reminding me considerably of some of the more prominent noise rock and no wave bands from a decade or two ago Valse Noot still manages to stand out.

The vocals come in a bit more towards the hardcore side of the spectrum, as David Bougaran has a forceful and higher pitched scream that brings Keith Buckley of Every Time I Die and even The Blood Brothers to mind at certain points.  It’s appropriate for the vocals to be so aggressive on an album called Utter contempt and makes Valse Noot even noisier than some of their peers.  Bougaran doesn’t scream the entire time though, as you’ll find he adopts some cleaner singing ranges on songs like “Angst” but they still have a rougher tone.  The band’s dedication to keeping things as noisy as possible when it comes to both their instrumentals and vocals is an element that I find quite appealing, as it gives their material an edge not everyone in this genre has.

Valse Noot keeps listeners off balance with abrasive, jagged riffs and regular tempo changes, resulting in an album that feels like a journey into madness.  Despite its weirdness there’s still room for even further experimentation, and where some of the other French noise rock bands have gone back towards mellower and traditional song structures I see the potential for this one to only get more avant-garde.  It’s sure to be an acquired taste for some, but if the likes of The Jesus Lizard, Arab on Radar, or even Aids Wolf are bands you enjoy then this album is worth checking out.  Utter contempt is available from Atypeek music, Ideal Crash, Vollmer industries, Super apes, French wine records, and offoron rex records.