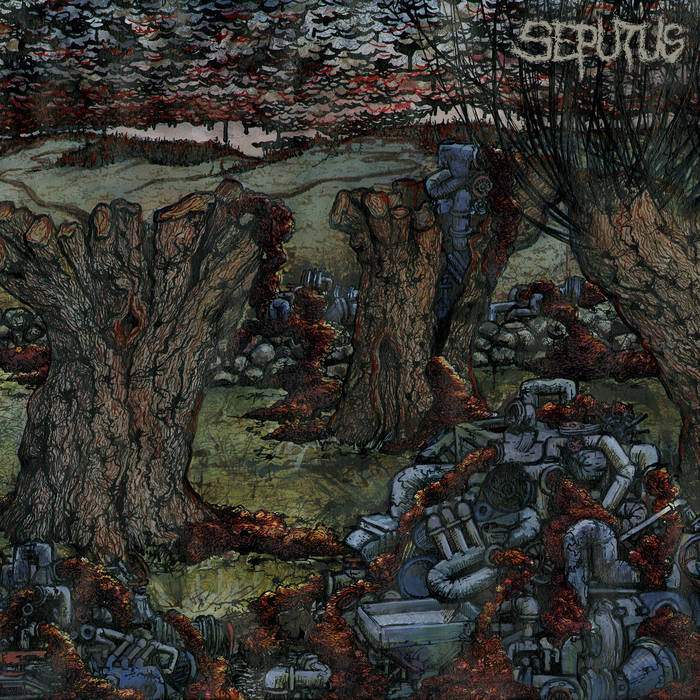 Man Does Not Give
by Seputus

Seputus was founded in 2005 but went quiet about 4 years later after a few recrodings. Steve Schwegler revived the project in 2013, inspired thematically by his time with the military.  With members of Pyrrhon, it should be no surprise that the works of Seputus are highly technical in nature.  Man Does Not Give, as the band puts it, "is a terrifying plunge into the depths of dissonant '90s-era American death metal, tempered by black metal melancholia and braced by elements of grind, thrash, and industrial noise."  Fans of groups like Imperial Triumphant and Dendritic Arbor should be impressed by this crew.

If all of those bands have one thing in common with Seputus, it's their uncanny ability harness pure chaos.  The level of drum and guitar mastery leaves me scratching my head every time.  Pressing play on Man Does Not Give is like opening Pandora's box or the Ark of the Covenant.  You know you probably shouldn't do it, but curiousity will get the better of you every time.  And you know what they say about curiousity... This album is a one-way ticket to having the flesh melted from your twisted and mangled bones.  "The First That Makes Flesh" is merely the beginning of your destruction.

And musical acrobatics aside, I have to give plenty credit to the vocal performance as well for its part in creating such a confrontational atmosphere.  The dual, and often layered approach, of the deep growls and grunts with the violent shrieks is insane.  So much so that I might crown this my favorite metal vocals of the year.  The interplay between these two distinct voices is quite terrifying, especially on tracks like "Vestigial Tail" and "Haruspex Retirement Speech."  The highly punctuated cadence conveys more aggression than an actual fist to the face.  And I love the recording style; rather than leaning on post-production reverb, it sounds as if these parts were recorded in a small, echoey, concrete room.

I know that on the surface this album may come off as just dissonant and noisy, but there is also an expert-level infusion of more conventional parts within the torrent of grinding guitars.  Hey, even the contortionist at the fair exhibits a certain amount of beauty.  If you really take the time to listen, you can hear plenty of catchier moments injected into the music right from the conclusion of the very first track (or that drum break on "Attrition Tactics").  This is the attention to detail I look for in a band such as this.  In any case, Man Does Not Give is yet another album I add to my must-listen releases of the year in terms of musicianship.  These guys display an extremely impressive level of songwriting and performance skills that never cease to induce unadulterated horror.