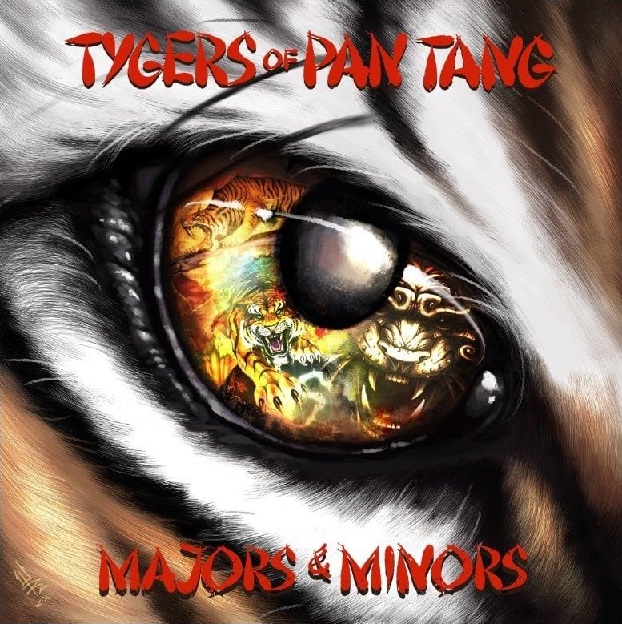 They might not have quite as much recognition as some of the biggest names, but Tygers of Pan Tang were as much a part of the formative days of NWOBHM as Saxon, Judas Priest, or Iron Maiden.  Although they would break up a few times and go through more of a rock-oriented transition in the late 80s, the 2000s and 2010s have served as a period of resurgence that brought some high-quality new material and increased effort to their earlier efforts.  Part of this has been due to the addition of Italian singer Jacopo Meille who joined in 2004 and was first heard on 2007’s Back & Beyond EP.  Since then Tygers of Pan Tang has released four full-length albums that continued to bring in the best of heavy metal and hard rock, and the Majors & Minors compilation pulls material from those efforts in order to shine a spotlight on this period of the band’s history.

Compilations can sometimes be hard sells to a lot of people, as longtime fans usually have most of the material on other formats and many come across like a cash grab from record labels.  There are certainly quite a few instances of this in Tygers of Pan Tang’s discography, as you’ll find material from their late 70s and 80s output that was compiled by previous labels.  With Majors & Minors though, it seems like this was one of the first ones to be worked on by the band themselves, and that helps the package to feel a bit more cohesive.  Despite the material spanning four albums with slightly different instrumental lineups (though preference does seem to be given to the self-titled and 2019’s Rituals), everything flows together seamlessly which is great for those that are new to this era of the band or have yet to hear any of their material.  I’m a fan of the song choices here too, as there are equal amounts of galloping and faster paced numbers that show the band at their heaviest alongside some melodic rock numbers that have some room filling hooks.  The first twelve songs on the CD (or eight if you’re going for vinyl) represent the “Majors” part of the compilation title, and in this regard Tygers of Pan Tang has certainly given their best from this time period as the riffs consistently grab listeners from start to finish.  Plus, Jacopo Meille’s contributions are worth noting also as he has a voice that bridges rock and heavy metal perfectly.  Don’t expect any falsettos, but there’s a good amount of bite merged with the type of melodic hooks that defined eras of hard rock and glam rock.

The “Minors” part is where this compilation might appeal most to collectors, though newcomers will still find that these additional songs fit in well with the rest.  “Spoils of War” from Ritual has been given a new orchestral mix which adds a suitably epic sounding background to the chorus and feels like it wouldn’t be out of place as a heavy metal intro to a James Bond movie.  The other two songs, “What You Say” and “Plug Me In” are much deeper cuts, appearing on a single and EP between 2016 and 2017, and while these two didn’t stick with me quite as much as some of the others on the compilation they still finish things off on a high energy note.  Major & Minor’s vinyl release also features a live recording of “Keeping Me Alive”, but since our promotional material was based on the CD format it wasn’t available to check out.

Releases like this can be hard to cover, but ultimately Majors & Minors serves as a great launching point for what I think it still an underrated heavy metal band.  Despite the material coming from a thirteen-year time span, everything flows together as a single album and there aren’t any glaring production differences that pull you out of the experience, allowing the mix of melodic choruses and heavier leads to shine through.  If you’ve spent a good amount of time with Rituals, Ambush, or the self-titled though, your mileage is going to depend on how interested you are in the deeper cuts, and chances are you’re better off returning to those albums individually.  Majors & Minors is available from Mighty Music.