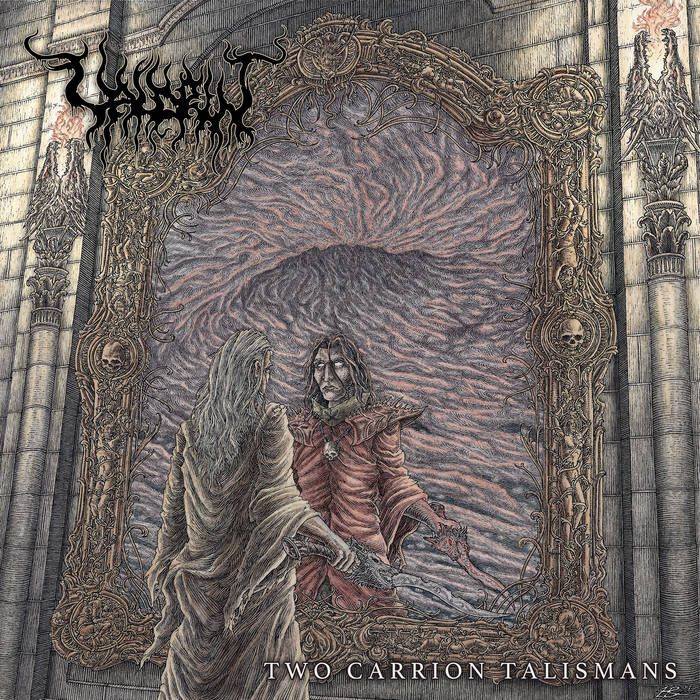 What I Like: This is another relatively recent US band that sounds like they time traveled straight from Norway circa 1992. You wouldn't think that a state with the motto "With God, all things are possible" would produce such evil sounding music...or perhaps that's exactly why it exists in the first place. The 2nd wave of black metal emerged in part due to feelings of religious persecution and tyranny, so I suppose it's only natural that regions so close to the "Bible Belt" would spawn groups like Valdrin.

In any case, these guys certainly hold their own when considered within the pantheon of the genre. Two Carrion Talismans utilizes an expansive palette; one greatly enhanced by the copious amounts of reverb and backing synths that characterized classic releases from the likes of Frost-era Enslaved and Sacramentum. The guitars deliver on plenty of ominous tremolos, but also a few solos and some progressive riffs along the way. The drums are equally energetic and sound massive within the cavernous production. But if I can pinpoint one aspect of this band that caught my ear, it's probably the vocals. Carter Hicks' croaks have such an understated sense of malevolence about them.

Critiques: Tracks can go on a bit longer than they should. There were times when repetition in the first two or so minutes had me checking out, only to be floored by some excellent riffage towards the end (Funeral Tides Of Orcus), or sometimes vice versa (Tempest Torn Asunder). I think cutting this down to 35 minutes or so would have made it a stronger, more consistent album overall.

The Verdict: I feel like there hasn't been a whole lot of black metal worth reviewing this year, so it was nice to come across Valdrin. Two Carrion Talismans is a righteous combo of black and progressive metal that pays respect to its roots while also forging a path forward. There's room to tighten up the songwriting here and there, but overall I am beyond pleased.