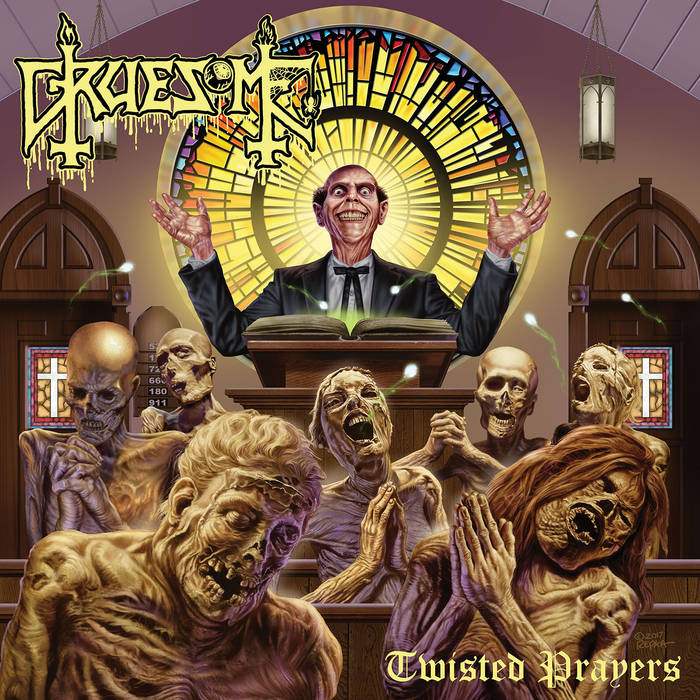 What I Like: True to its influences, Twisted Prayers is the most technical Gruesome album to date. While you can expect the same old school death vocals and throwback production that we've come to know and love thus far, they have certainly upped their game in terms of musicianship. I had previously praised the band for the "proggier direction" of the track "Fragments of Psyche" on the EP of the same name, and I'm pleased to see the band continue on in this manner.

Having never actually heard Spiritual Hearing, I may be a death metal heretic, but it affords me the opportunity to review Twisted Prayers on its own merits as opposed to just a tribute. In this respect, Twisted Prayers is a solid album that stands on its own two feet. The guitar hooks are varied and memorable, the drumming consistently gets me banging my head, and the vocals continue to invoke a bygone era of rebellion to which we owe much of where the genre is today. Furthermore, the songwriting is pretty darn consistent and offers much in the way of shifting pace and dynamics.

Critiques: I've heard the argument that there isn't really a purpose for this band given that they could just go back and listen to Death records. That's not invalid, but on the other hand I'm sure there are those just happy to get the closest thing to new Death records that they could hope for. On a more personal note, I'm not a fan of the slower moments on this album. OSDM is best served hard and fast in my opinion.

The Verdict: Gruesome continue to hone their craft and do justice to the greats with Twisted Prayers. With each release, they only seem to get better and better at what they do. I'll be interested to see if they get to a phase where they are theorizing where Death would have gone if they were still making records today. Gruesome aren't the best OSDM band out there, but they have certainly earned their place within the genre.