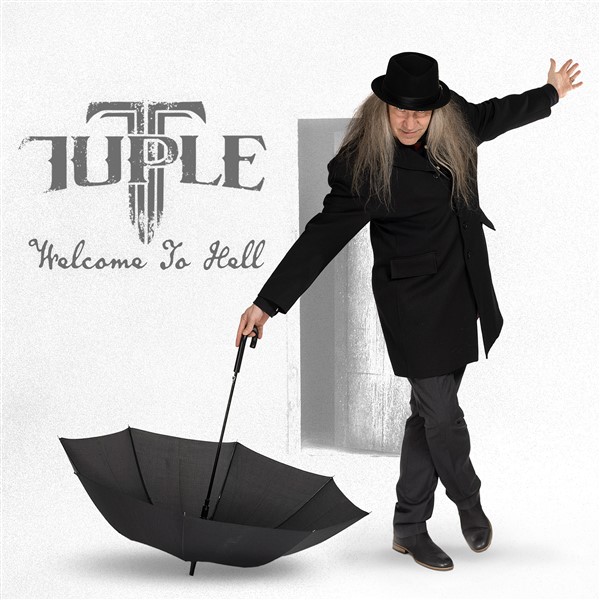 Welcome to Hell
by Tuple

Tuple is a newer AOR/heavy metal band formed by Tommi “Tuple” Salmela, a Finnish singer who has fronted Tarot and Lazy Bonez.  Alongside three other members that have a similar list of credentials in the rock and metal realms, Tuple released their debut album Wooden Box last year and have quickly followed it up with another effort titled Welcome to Hell.  Despite the quick turnaround, the group has continued to fire on all cylinders with an album that’s filled with catchy melodies, limitless energy, and just the right amount of aggressive edges.

I’ve been reviewing a lot more melodic rock and heavy metal in 2021 than in years past and have found quite a few bands that are masters of the soaring guitar and keyboard driven chorus that feels like it could fill arenas.  Tuple goes for a similar approach, delivering infectious melodies that trade off which of the two instruments is emphasized depending on what song you’re on.  What is likely to draw many listeners into Welcome to Hell is its ability to offer warm and inviting hooks alongside some darker moments, drawing the type of bright and colorful sound as Journey on certain tracks while having a bit of that darker and grittier heavy metal tone on others.  It goes a long way in making the material consistently enjoyable to dive right into, and there are even a few dips into glam territory on songs like “Pride”.  The choruses are huge, and even when the instrumentals completely mellow out, they’re still able to boom outwards in a room filling manner that makes you want to crank up the volume.  It’s impressive how quickly Welcome to Hell was released following last year’s album, as usually this tighter turnaround would result in songs that felt underdeveloped or too uniform, but that’s not the case here.  Unlike some of the other AOR and melodic rock that I’ve reviewed recently that seemed to peak halfway or three quarters of the way through, Tuple’s latest remains consistently strong all the way through and that’s kept it on regular rotation for weeks at my house.

Chances are good that you’ve been drawn to Salmela’s voice if you’ve listened to recent material from Tarot or Lazy Bonez, and he’s in perfect form throughout Welcome to Hell.  While his soaring and charismatic voice could easily stand on its own, the songs tend to emphasize layered vocals with guitarist Riitis and Sonata Arctica’s Tony Kakko providing back-ups at key points.  As a result, Tuple often starts off with slightly more aggressive and booming singing that comes through like a mix between 80s AOR and Dio style heavy metal before opening into entrancing melodic choruses.  Another highlight comes courtesy of “Survive” where Salmela duets with Battle Beast’s Noora Louhimo on a song that’s got a danceable beat.  The performances hook you from one moment to the next, and it helps to set Tuple apart from some of the others out there.

While it may still be pulling from a lot of familiar territory, the heavy metal edge in both instrumentals and vocals are integrated in with the soaring melodic rock in a way that makes Tuple’s latest effort sound less derivative and cliched.  Add in some incredible hooks that will stick with you on both the early and later songs, and you have one of the best releases in this type of rock that I’ve heard so far this year.  Samela and company have a considerable amount of skill when it comes to nailing room filling choruses, and I certainly won’t be complaining if there’s already more music by this time in 2022.  Welcome to Hell is available from AOR Heaven.