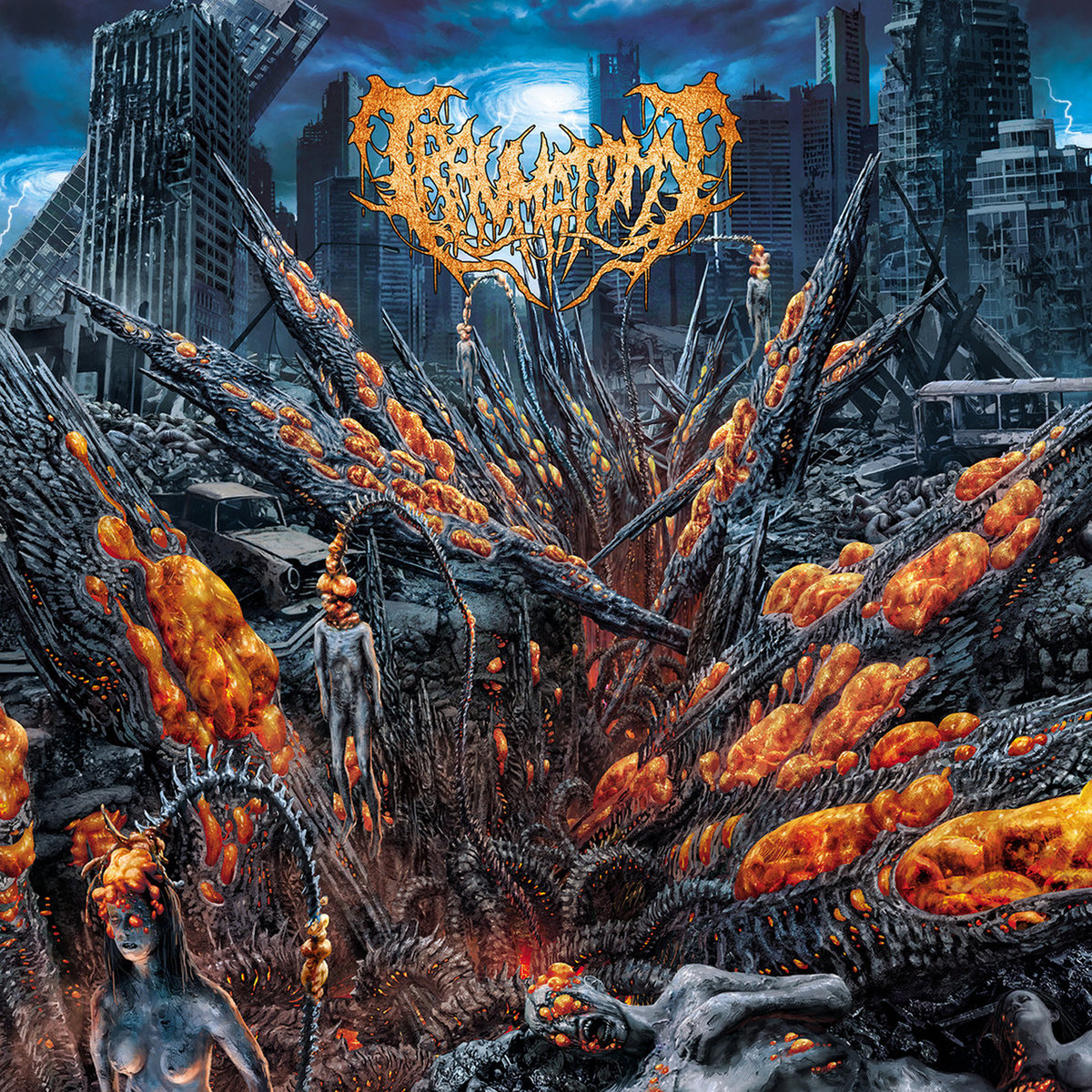 Brutal death metal band Traumatomy was formed back in 2012 as a collaboration between Russian guitarist/bassist Constantine Chevardin and Japanese vocalist Haruka Kamiyama.  In its earlier days, Chevardin handled drum programming and the band was purely a studio project, but a few years into its life an all-Russian lineup would be recruited for live performances.  Now on their third album Extirpation Paradigms, quite a bit has changed with Traumatomy from a roster perspective but their unrelenting and groovy take on brutal death metal and slam remains intact.  Although there are still some flaws that keep this one from reaching the upper echelons of the genre, it’s still a noticeable leap forward and worth a listen for fans of the style.

Since the 2017 Embodiment of Excruciation EP the band has recruited a bassist and drummer, and with this expanded lineup comes a more fluid and natural sound.  That’s not to say that the drum programming on past releases was bad by any means, but having a live drummer allows for Traumatomy to have more interesting fills in between the blasting and slower grooves that you’d expect from the genre.  The cymbal work in particular goes a long way into making some of these songs have some extra punchiness to them, and when combined with the chugging grooves and heavy tonality of the rest of the band it adds up to an appropriately brutal yet catchy album.  Extirpation Paradigms also benefits from a well-balanced production that gives a pretty even split between the guitar, bass, and drums, letting them all bludgeon you into submission while making it easier to make out the details.  The one exception to this is the use of 808 bass drops on most of the songs, which overpower the rest of the band and create some choppier transitions.  I’m not against them being used in brutal death metal, but they disrupt the flow here and could be better integrated into the mix.  But aside from that, there’s plenty to like here as the group hits hard and switches things up just enough to avoid repetition.

There may be some confusion as to who’s in Traumatomy as all the promo pictures features the all-Russian live lineup, but Haruka Kamiyama is still featured throughout Extirpation Paradigms.  But this time around they’ve also let live vocalist Kirill Zarubin split duties with Kamiyama, bridging the gap between the lineups.  The differences between the two are subtle as both go for guttural growls that are extremely distorted, and I can’t tell you who’s who for a particular section or song.  But that’s not necessarily a bad thing, as both deliver consistently intense performances that sync up well with the rest of the band.  For the final song “Epitome of Depravity” Traumatomy brought in Defeated Sanity’s Josh Welshman which is where you’re likely to notice some pitch changes, and it finishes the album off on a high note.

Even though most of the brutal death metal and slam may not deviate from the elements that have defined these metal genres for a few decades, it still makes me happy when it’s done well.  Traumatomy is able to do just that with album number three, as the new bassist and drummer have helped them to refine their ideas even further.  The bass drops do hurt the flow for me, and if the band wants to keep using them in the future, I’d like to see them better integrated so that they don’t pop out so much.  But these guys are on the right track and if you like some heavy slams, this album’s worth your time.  Extirpation Paradigms is available from Gore House Productions.