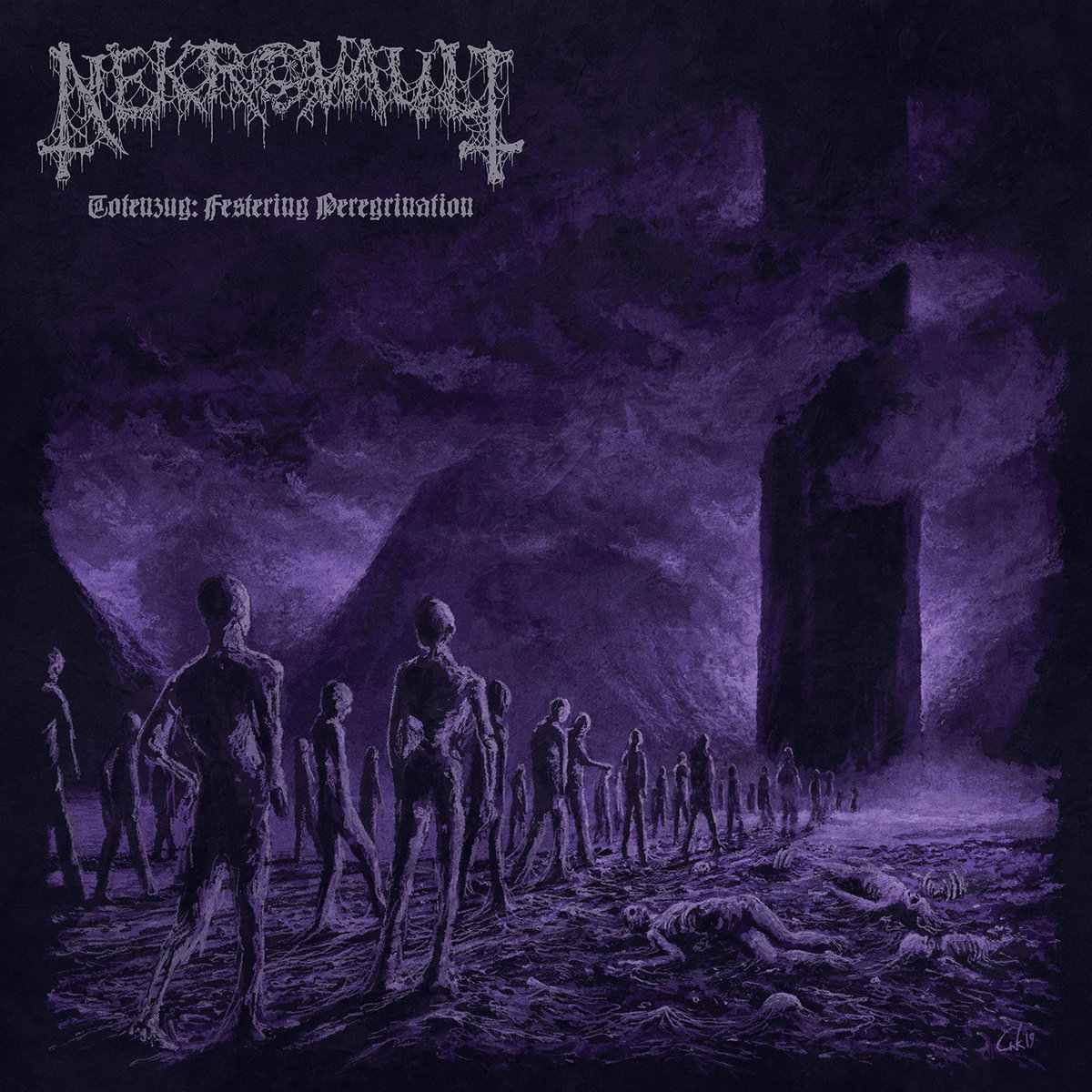 Germany’s Nekrovault have kept a steady pace since forming in 2017, releasing two EP’s in 2018 and 2019 before unleashing this year’s Totenzug: Festering Peregrination.  Comprised of seven tracks which move between crushing fast paced death metal and lumbering slower pieces that tread into death/doom territory, for their full length the band’s sound has gotten even denser and feels like it can drag you down into a deep crypt.  While they may be pulling from familiar territory, Nekrovault delivers it in highly polished fashion and add enough additional flourishes to its nightmarish death metal base to stand out in a crowded year.

What works in this album’s favor is how thick and murky an atmosphere its able to create on each song.  Compared to the EP’s the instrumentation has gotten even denser and it often feels as though each of the riffs is drenched in a thick fog that is going to pull you under and push you fully into the abyss.  There’s often a fine line in this type of death metal between murkiness that creates a haunting and dread filled atmosphere and polish that allows the details to break free, and Nekrovault is able to tread this with ease as there’s plenty of murk but individual riffs jump out at you from one song to the next.  Totenzug: Festering Peregrination front loads some of its longest tracks, and what you’ll find as the song lengths expand outwards is the tempo often slows towards some death/doom approaches where the band bludgeons you slowly while still kicking things up into an all out assault at just the right moment.  It may not fall terribly far from what you’d expect from death metal of this type but Nekrovault has the chops to keep the material memorable and the atmosphere to suck you in, with melodic flourishes giving off slight hints of black metal that shake things up a bit.  The closing track “Erementorium” shakes this up significantly with a more upbeat drum pattern and more varied guitar work, hinting that there’s room for the band to expand outwards even further in the coming years.

The vocals only add to the murkiness as they move between extremely low growls and higher screams, coming through with just as much density and weight as the instrumentation.  At times Nekrovault’s vocalist breaks into a full-on howl which has sent chills down my spine on every listen, and it’s one of those little touches that helps to put the material over the top.  Compared to some of the other death metal bands out there where the screams or growls have an immense amount of power but feel one-dimensional, there’s a considerable amount of variation to the pitch here that keeps things fresh as they pummel you into oblivion from one moment to the next.

Some of the slower moments do drag slightly, but the quality of the riffing and thick dread inducing atmosphere have kept me returning to this album on a regular basis.  Similar to Venomous Skeleton, this band keeps the tension high whether they’re lumbering along at a slower pace or stirring things up into a chaotic whirlwind and their type of death metal is a welcome one that fans will be sure to get a lot of mileage out of.  Nekrovault has left some growing room, especially if the closing track is anything to go by, but they’ve started off at a higher level in a much shorter amount of time than many of the others out there.  Totenzug: Festering Peregrination is available from Ván Records.