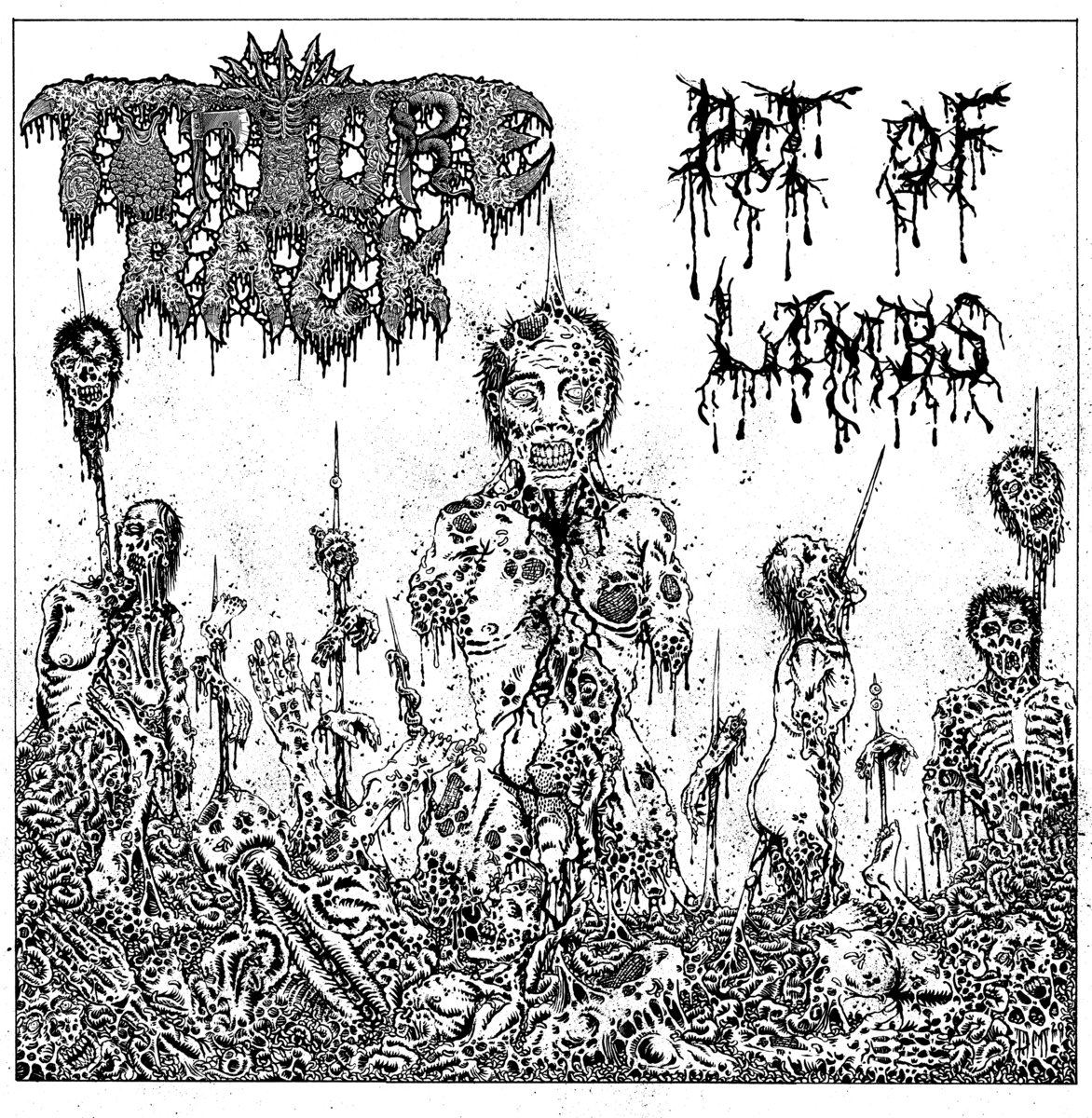 Pit of Limbs
by Torture Rack

Since their formation in 2012, Portland’s Torture Rack has offered a more straightforward and bludgeoning take on death metal.  Where others had too much filler or dragged out ideas to the point of repetition, the compactness of this band’s songwriting and the sheer density always made them appealing.  Following up on 2018’s Malefic Humiliation, Torture Rack started off 2021 with a four-track EP titled Pit of Limbs which gives listeners six and a half minutes of speed and brutality.  With short bursts that come in quick and don’t overstay their welcome, there’s plenty of substance here that will appeal to fans of everything death metal and leave them wanting more.

Since their inception Torture Rack has often written death metal that’s built for speed and density, as even when they slow down slightly the grooves don’t last for more than a handful of seconds before its back to a blitzkrieg of faster blasting.  That’s the case on each of the four songs that make up Pit of Limbs, as they’ve trimmed off any fat off of what was already a fairly lean approach to writing.  Only the final track comes close to the three-minute mark, with the others coming in at a minute to a minute and a half, approaching grindcore song lengths.  But it’s what the group crams into this short span of time that makes the EP so appealing, as they pummel and bludgeon with the best of them, naturally mixing up those quick mid-tempo grooves with blasting that feels like it can take your face off.  The forty-second “Desperate Shriek of the Writhing Limbless Shriek” is the perfect example of this as it lurches forward with a nasty tone at one hundred miles an hour and is over before you realize it.  Compared to Malefic Humilation the recording comes through with even more weight and the bass seems to have been given even more attention in the mix.  It does leave me wanting more, but that’s a testament to the strength of the writing here that even a six-minute release doesn’t come across like a stopgap between albums and has some legitimate substance.

Torture Rack’s vocalist Jason also plays bass in Witch Vomit, and you’ll find that the focus here is almost entirely on the more guttural growls.  Where the latter (which has Torture Rack guitarist Tony on vocals) went for some higher pitched screams and snarls at certain points, the performance here starts off at a very low guttural range and only seems to get lower with each passing minute.  While the approach is slightly different, what remains the same between both bands is how much intensity the vocals brings to the table as they consistently seek to decimate everything in their path.  It’s abrasive enough that I originally thought it was the same singer until helpfully corrected by the label.  The style is familiar, but I can always appreciate when it’s delivered with this much energy as it recalls some of the more unhinged and gory performances of many classic albums in the genre.

There’s a sense of familiarity to the type of primitive bludgeoning and speedier approach Torture Rack employs, but they do it better than most.  By avoiding the padding of song lengths or unnecessary interludes some death metal bands go for, this material just goes right for the throat and doesn’t let up while having some actual stand-out riffs to go behind it.  Hopefully the almost grind-like song lengths are something the band will continue with by the time another album come around, as they are able to effectively utilize these shorter spans of time.  And while we’re at it, I also hope that we’ll get more this year rather than having to wait for more barbarity.  Pit of Limbs is available from Extremely Rotten Productions, Headsplit Records, and Parasitic Records.