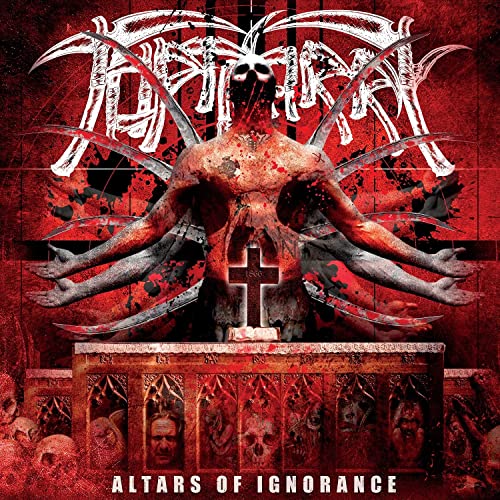 Altars of Ignorance
by Tortharry

Originally formed way back in 1984 under the name Imago (and later Executor), by 1991 Czech death metal band Tortharry had adopted their current title and has been releasing material ever since.  Their exposure seems to be limited primarily to their home country and other parts of Europe though, as despite this year’s Altars of Ignorance being their tenth full length I hadn’t come across them before.  But this proved to be a good jumping on point, as the band seamlessly moves between faster paced death metal with a bit of an old-school death/thrash influence and plenty of grooves that keep the brutality at a high.  The sound is familiar, but the songwriting has a bit more technicality and unexpected transitions that make this a worthy listen for fans of everything death metal.

One of the first things that grabbed me and convinced me to spend some extended time with Altars of Ignorance was the vocal work of Dan "Heatley" Pavlík.  Pavlik has a very deep and powerful growl that sounds like a cross between Peter from Vader and Jan-Chris de Koeijer from Gorefest.  Compared to the standard guttural growls and higher shrieks, the way that these three vocalists deliver immense power behind every word and enunciate so the lyrics stand out a bit easier really works to their advantage and that drew me further into Tortharry’s material.  Although the overall pitch stays at around the same range for most of the album, each verse is well spaced out so it avoids seeming too one-dimensional or repetitive and each appearance bludgeons listeners as much as possible.

Following a short intro where you get some darker melodies and orchestral elements, Tortharry launches right into some extremely heavy and brutal sounding grooves.  Stylistically the group falls somewhere between earlier death/thrash with fast attacks and the type of death metal that emerged in the mid to late 90s that utilized a lot of slower grooves and chugging bass lines.  You’re likely to find a lot of other groups come to mind, with the likes of Vader, Blood Red Throne, and Severe Torture being what I made some immediate comparisons as I made my way through Altars of Ignorance.  But what helps Tortharry stand out a bit more from the pack is what they do with these familiar elements.  Rather than being more straightforward and primitive in their bludgeoning riffs and drumming like a lot of current death metal, there’s some technicality behind their performances and the material tends to switch gears in some unexpected ways.  It never quite reaches what I would consider technical death metal, but there’s more variation and thought behind many of the riffs and songs like “Corrosive Haven” and “Silent Psalm” stick out in my memory.  The ten-minute closer “Forget Us, Like We Do” even completely flips the script for a bit and heads into some grooves that sound more like Pantera and Corrosion of Conformity than death metal, channeling a bit of death ‘n roll.  Admittedly despite the catchy grooves early on, I do think that this song does drag on for a bit too long and blunts the impact slightly on an otherwise compact package.   But given the intensity and variation early on, I’ve still found myself returning for more.

It’s clear from this album that Tortharry remains a well-oiled machine, and they’re able to deliver an appropriately brutal and groovy take on death metal that finds a balance between the origins of the genre and mid-90s variants that evolved out of it.  Although the closing track does overstay its welcome a bit, the subtle variations and number of riffs that stick with you makes this one worthy of the attention of death metal fans.  I’ll have to go back and check out some of the group’s back catalog to see where this stacks up, but they’ve made a strong first impression on me.  Altars of Ignorance is available from MetalGate.