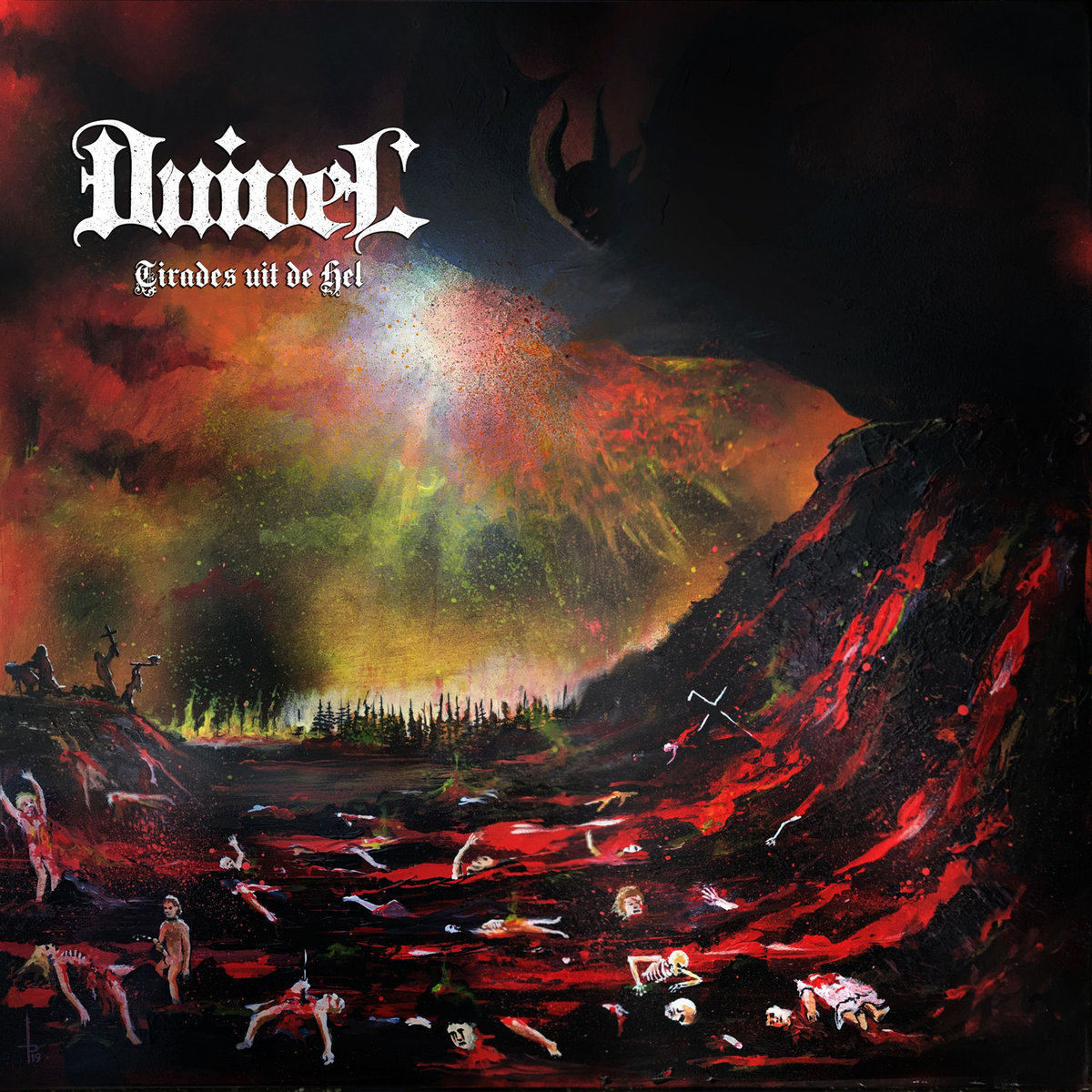 Dutch black metal continues to dominate this year, with Duivel joining the fray having offered a convincing effort.  Formed recently from a number of genre veterans, last year’s two-song EP was only a taste of what debut full length Tirades uit de hel has unleashed upon unsuspecting listeners.  Spread across a compact thirty-three minutes, the material has the rawness and nightmarish sounds that recall second wave black metal while throwing in some unexpected elements that get under your skin.  It may fly by quickly, but there are plenty of elements that will stick with you and keep you coming back for another lashing.

Where some of the other groups from the Netherlands have focused on different sides of black metal, Duivel’s core focus is going for the throat with raw and abrasive instrumentation that drags you across barbed wire from beginning to end.  There’s a similar amount of rawness as many of the second-wave Norwegian bands offered in the 90’s yet the production values are full enough to provide some separation between instruments, letting each one reach their most potent level.  While this makes it sound as though Tirades uit de hel is content with hitting that familiar template and calling it a day, there’s plenty of additional nuances to the writing that give the album a feeling all its own.  Whether it’s the eerie keyboards on “Het zwarte hart van walging” and “Sluimering van de dood” or the punk edge to “Dolend verteerd”, Duivel veers in unexpected directions that stand out and draw you further into their nightmarish material.  These subtle changes work wonders given the concise run-time, as there’s plenty of all-out blasting and violence but they never stay in one place for too long and there’s always a stand-out section that listeners can focus on throughout each of the six tracks.

One of the other differences to Tirades uit del hel is that it features four different singers who have been a part of a whole slew of other Dutch black metal bands over the past two decades.  What’s remarkable about this is how closely the four are able to complement each other with raspier screams and some truly inhuman sounding ranges, to the point that Duivel’s debut sounds cohesive and you wouldn’t likely realize that there were different people on the mic if you didn’t know it beforehand.  After that initial listen you can start to recognize individual differences on each of the tracks where there is a different vocalist, as each one has a slight variation to cadence and how they move up and down in pitch.  But no matter where you are in the album one thing is for sure, the screaming hits hard and feels like it can peel your skin right off your bones.

Duivel initially seems as though they’re going to channel the same abrasiveness and chaotic feeling of the early Norwegian black metal styles and call it a day, but underneath the surface there’s more at play on their debut that makes them truly stand out.  Underneath the rawness and blasting there are synth and other instrumental passages that stick with you after repeat listens, and this elevates the album above some of the more simplistic efforts 2020 has provided.  Dutch black metal has truly conquered much of this year and Duivel is right up there with some of the best in the pack.  Tirades uit de hel is available from Ván Records.