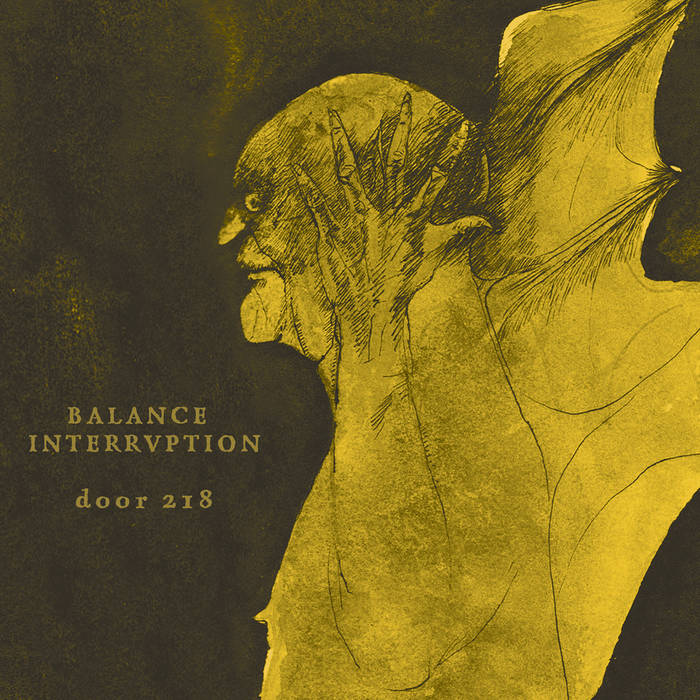 If I gave album of the year to every record that made me say "damn, this is awesome," I would have a lot of them.  It is with this idea in mind that I developed my 3 score system.  Throwing musicianship and innovation into the mix helps keep me a bit more objective, and it really has helped seperate what is fun from what is truly taking steps above and beyond the pack.   Any release that manages to top out all 3 scales is one truly deserving of special accolades.  So it is with much respect and pride that I am able to bestow this honor on a relatively small and unknown group of musicians, Ukraine's Balance Interruption.

What makes this honor even more special in my eyes is that this experimental black metal group from Satanath Records pulled a complete upset.  I had already filled out my top 10's for all 3 categories before Door 218 dropped on my doorstep and threw a wrench into something I had been working on all year.  But hell, they deserve it.  Anyone who follows our facebood page may have caught the first time I listened to the album, during which I called the band "my new spirit animal."  So in terms of Enjoyability, they nailed it immediately  A 10 for this scale means that I would put nearly every song on the album into a must-listen playlist.  Check.

In terms of Musicianship, once again, out of this world.  The songs on this release are not only fast and mathmetically complex: the compositions manage to boil all of this chaos into something extremely listenable.  From the guitars and electronic beats to the wailing saxophone, the writing is on point and the performances are alive.  The guitar riffs range from Absu-esque madness to your more traditional dissonant black metal chords; and the chunky basswork (especially on "Incubatum Conveyer") is unmatched this year.  There have been plenty of technically proficient albums to cross my path, but few managed to achieve such heights while still keeping me 100% engaged. This brings me to my final point, which in many ways I consider to be of the utmost necessity when it comes to an AOTY.

Innovation is a must.  We don't give out Nobel Prizes for things that have been done over and over again already.  Such consideration is reserved for something that breaks new ground.  Again, there have been plenty of albums in 2016 that have done this.  For a long time I was considering Schammasch's Triangle for the award, but for all of that album's impressiveness, Door 218 simply does more.  With the sheer volume of music I listen to on a daily basis these days, I would be hard pressed to say that anything I hear is 100% original, but Balance Interruption reaches about as far as one can hope into this wild territory.  The fusions of electronic, avant-garde, and black metal are ones that defy logic at times, and truly do "upset the balance."  And returning to the idea of score overlap, few achieve such bizzareness while still maintaining tracks that are highly digestible even after a single sitting.

In sum, Door 218 is an album that you simply must not ignore.  It should appeal to headbangers, musician nerds, and the genre-breakers alike.  Every single song will snap your brainstem while also inducing the most pleasant of metal euphorias imagineable.  This by no means should leave you ignoring the other albums I will be highlighting come December, but if for some reason you can only listen to one album this year, it should be this one.  Please support this excellent band and encourage them to continue making music.  My hats off to them, and also to Satanath for taking a chance on something they knew to be special.  Stream it in full today.