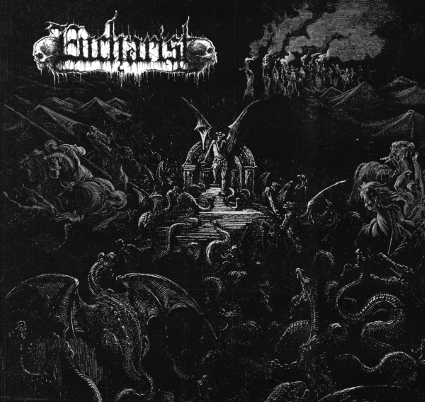 Mere months after releasing Demise Rites, a demo collection released on vinyl by IRON BONEHEAD PRODUCTIONS, Australia's Eucharist are back with a two-song EP entitled Endarkenment.  This is the band's first new material in almost five years.  I am not familiar with the group's history, but I am told that Endarkenment shows a "new side" to the band while also "diving deeper" into the duo's sound; "invoking ritualistic possession and nocturnal obeisance."  Maybe bring some holy water with you on this one.

Now comes the inevitable comparison with Portal.  The delivery is perhaps even more vaccuous and less produced than the darlings of the atmospheric death metal world, but the comparisons stand.  Other worthy nods go to Abyssal and Vacivus.  listening to Endarkenment is the equivalent of listening to Satanic-sounding death metal from inside of some remote space shuttle where you are the only passenger.  There is an overwhelming sense of dread and isolation within the reverb-heavy layers of dense distortion and indecipherable growls.

Each track is like some demonic mantra designed to wear down the mind and senses over time, entering from all directions and contorting perception.  A snake hissing in the ear.  Every aspect throbs and pulsates, with the drums quickening to our inevitable possession.  That's the feeling, anyways.  I still conjured enough self will to put this summary together, after all.

The closing remark here is simply that Eucharist have succeeded in bringing us a truly emersive EP that satisfies similar urges as did Adversarial last year.  It's aggressive, yet subdued.  And throughout, it should make the average person feel just a little uncomfortable listening to it.  They may not be sure exactly why, but they will most certainly recognize the recoiling effect.