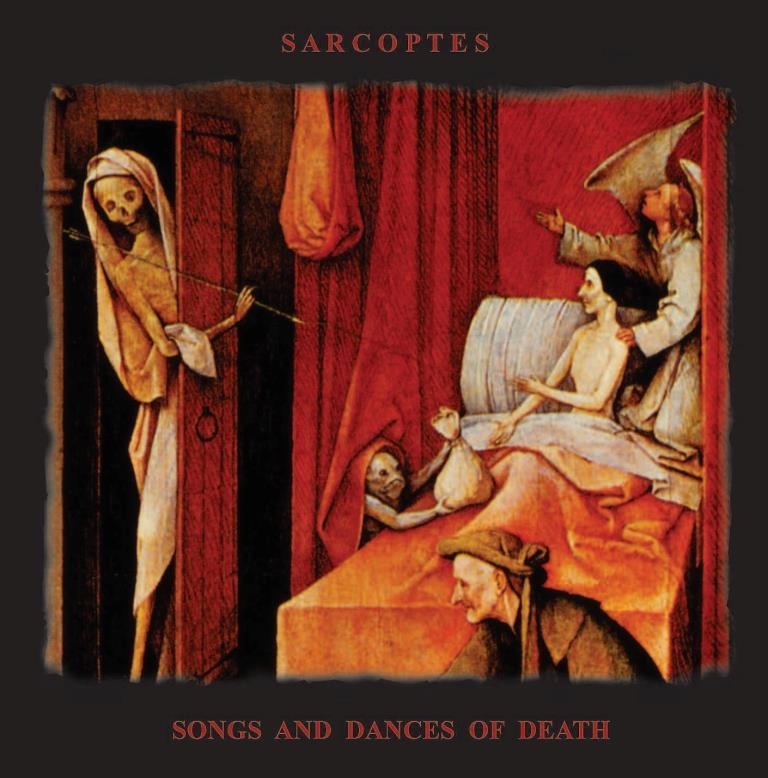 Songs And Dances Of Death
by Sarcoptes

Sarcoptes are a duo from Sacramento CA.  Formed in 2008, these guys play one of my favorite genres: blackened thrash.  And boy do they do it well.  With only one other release in 2013 their debut EP Thanatos, it is time to unleash their first full length.  Sarcoptes, now signed with Cimmerian Shade Recordings, brings you Songs and Dances of Death. This is another album you should not miss.

And if you're anyting like me, all it will take is the first few minutes of opening track, "The Veil of Disillusion," to convince you that the right choice has been made.  This song is just plain thrilling with the furious speed of the riffs and powerful delivery of the black metal vocals.  The rest of the album fortunately carries this same energy with the drum velocity threatening to break the sound barrier.  They still can't quite top my favorite BM/Thrash combo, Absu, but they have the same talent for fetching hooks and raw aggression.

Sarcoptes also switches things up a bit in style.  The first 3 tracks are fast and ferocious, but the second half sports a more ominous black metal vibe less reliant on fusion.  These songs are much longer, shifting from already lengthy 6 minute outings to those upwards of 13.  Personally, I favor the first half of the album; but that's not to say the latter is unsuccessful.  I find the dark atmosphere and continued focus on great melodies to be quite engaging.

All in all, Songs and Dances of Death is a really just...awesome album you should check out.  By the end of the week I am usually too burned out to got after any latecomers, but when I heard the first track on Friday it was clear what had to be done.  Great performances, great hooks, and above all oustanding energy.  I'm just sorry you had to wait a few days past release to hear about it.  I'm only human.  Stream and purchase below.