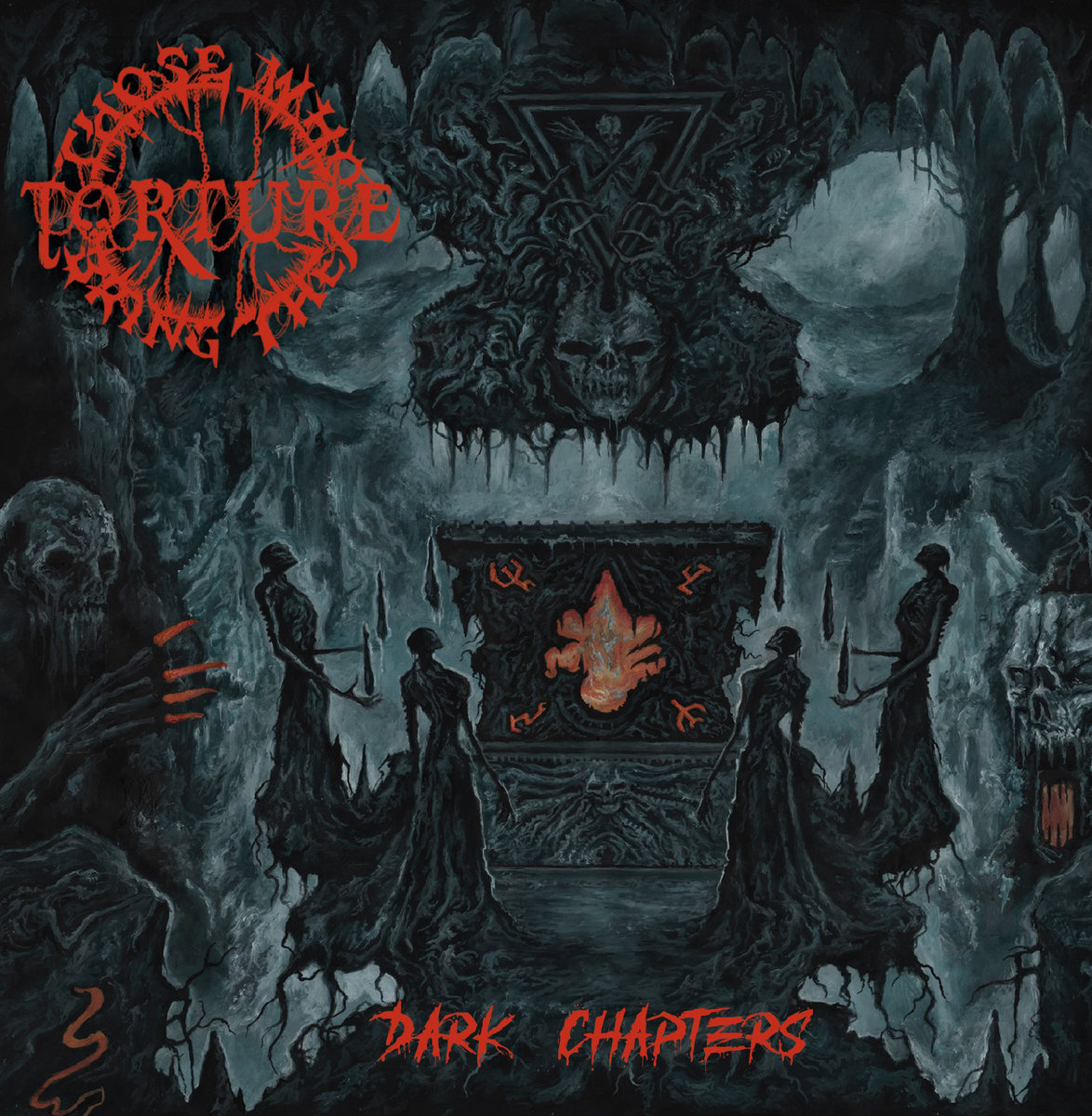 Dark Chapters
by Those Who Bring the Torture

Listen to Those Who Bring the Torture
Bandcamp

I’ve often found Rogga Johansson’s many projects to be the comfort food of Swedish death metal, as you know exactly what you’re getting but it remains enjoyable no matter what band you’re choosing to indulge in.  With bigger names like Paganizer, Ribspreader, and Revolting being just a handful of the groups Johansson is behind, chances are you’ve experienced his love for death metal in some form.  One of his more recent releases is the latest album from Those Who Bring the Torture, a band that started off playing death/grind but transitioned years later to a mix of old-school and melodic death metal.  Dark Chapters continues along the path its predecessor Pain Offerings followed in 2018, but with the addition of new members Jon Rudin and Kjetil Lynghaug Those Who Bring the Torture have written material that’s even more melodically focused than before and this brings more hooks than ever before.

The change in style between 2008’s Tank Gasmask Ammo and 2012’s Lullabies for the Deranged was one of the biggest shifts Those Who Bring the Torture has been through since their formation in 2007, as the move from brutal death/grind towards a mix of traditional and melodic death metal changed the group’s sound quite a bit.  Since then each album has tweaked with the formula, with Johansson still leaning towards early melodeath and bands like Hypocrisy where there was an equal balance of bludgeoning instrumentation and soaring melodic leads.  Dark Chapters continues this approach but there’s noticeably more polish to the songwriting compared to the past few albums and it’s clear that the new blood has helped the group considerably.  Throughout the nine-track release you get a little bit of everything Swedish death metal, with the title song bringing forth the type of lumbering grooves and intense blasting you’d expect only for “Dammed the Universe” to bring in soaring melodic leads and thrashy riffs that bring to mind the earlier days of melodic death metal.  It’s an approach that works incredibly well, and songs like “The Malevolent World” and “Born to Cleanse” feature some of the catchiest hooks Those Who Bring the Torture have written in some time.  Admittedly there are some lulls, as I found that when the instrumentals went back towards standard death metal they didn’t stand out quite as much as the melodically focused ones, but there’s still plenty of substance here to keep listeners coming back.  It’s also worth mentioning that the mix is phenomenal, perfectly balancing the sweeping, epic nature of the melodies with the bottom heaviness of the rest of the band in a way that reminds me of a number of classic 90s albums.

Rogga Johansson handles all of the vocal work on Dark Chapters, once again delivering low-pitched growls and higher screams that sound like they’re ripped right out of a horror movie.  This is another area where Those Who Bring the Torture capitalizes on what makes death metal so appealing, as each verse is drenched in grime and comes through with an inhuman touch.  Where a lot of recent Swedish death metal has tended to fall into repetition thanks to vocalists that have limited range and use the same growl or scream for an entire album, there’s a considerable amount of variety to Rogga’s performance and it makes a big difference.

While not every song truly stands out, there are some genuinely great moments on Those Who Bring the Torture’s latest album that strike that perfect balance between heavy grooves and powerful melodies.  It’s clear that this new lineup has helped to bring even stronger ideas and polish with it, and as a result this is one of the better releases the group has put out in their decade plus career.  Here’s hoping Rudin and Lynhaug stick around, as they might just help Those Who Bring the Torture reach new heights in the future.  Dark Chapters is available from Iron, Blood and Death Corporation.