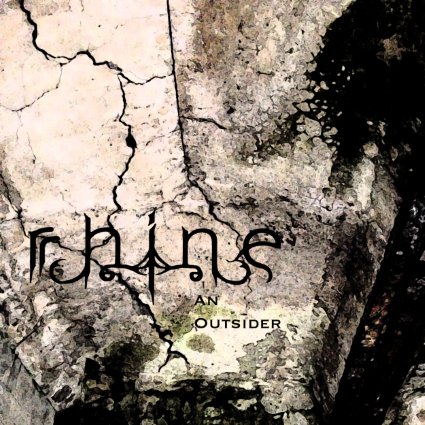 An Outsider
by Rhine

Seattle’s Rhine are reportedly on a mission to "connect German thrash metal with Swedish death metal much like their namesake, the Rhine River."  The band started in 2011 with the release of their first album Duality which was at first a solo effort by Tachell (guitar and vocals) and eventually led to a full band:  Alex Smolin on guitar (ex-Metameric), James Porter on bass (Ideofone), and Carlos Delgado (Inferion, ex-Death Crowned King) to collaborate on this project.  Tachell is the primary inspiration for the current material, referencing experiences in his life from emotional turmoil, health issues, fairy tales, to dreams of finding corpses floating in a swamp.  Band founder Gabe Tachell comments on the album:

"The name An Outsider is about the struggle that comes with being different, it’s a love/hate situation. You want to shine but you’re afraid of it at the same time. You want to create trends, not follow them, but it’s scary to be the first one. It also has to do with social struggles and always feeling like a stranger. This theme is primarily represented by the title track. Many of the songs have different themes that are not all closely related. The album is all over the map emotionally. Not just angry and dark, but sometimes totally ironic or sometimes very deep and inspiring. It mixes in emotions you wouldn’t typically hear on a metal record like joy and nostalgia. The listening experience is a journey that won’t get you worn out on a single emotion, instead it is dynamic like we are as humans. We form strong bonds to the music we love because of all these things that it can convey, and we are attempting to create something people can feel the same way about."

The sound is reminiscent of many very disparate groups: Beautality, Children of Bodom, Enslaved.  Tracks like 10-minute opener "Dreaming of Death" are perhaps a bit Opethian as well, along with the acoustic elements sprinkled throughout the album.  Compositions leap around from folky clean singing to death metal growls over synthesizer and proggy organs.  One minute we're listening to Isa or RUUN, the next it's a bit more Einfallen. This latter comparison popped up a few times for me in the scope and variance of styles within each track.  I wouldn't quite say that An Outsider wowed me as much as Beautality did, but this is definitely up there.

The rocking chord progressions, Åkerfeldt baritone, and snarls of tracks like "Paralyzed" and "Dissolved in Fire Master" are sure to get attention from those itching for something both grand in scale and highly infectious.  And the wealth of styles at play are pretty impressive given how well they are fused together.  80's-sounding synth effects, classic rock solos, Alexi Laiho-ish shredding, horns, harpsichord (these last three all within "P.R.E.Y. Master"): all just pieces of the puzzle.  "Into the Unknown Master" even cranks up the weirdness to almost Sigh proportions.

I'm not quite sure what it all means, but it's definitely impressive.  Extreme prog fans delight, because your first ship has come in this year.  It ain't a tugboat either, this is the Black Pearl.  An Oustider releases today and can be streamed below.