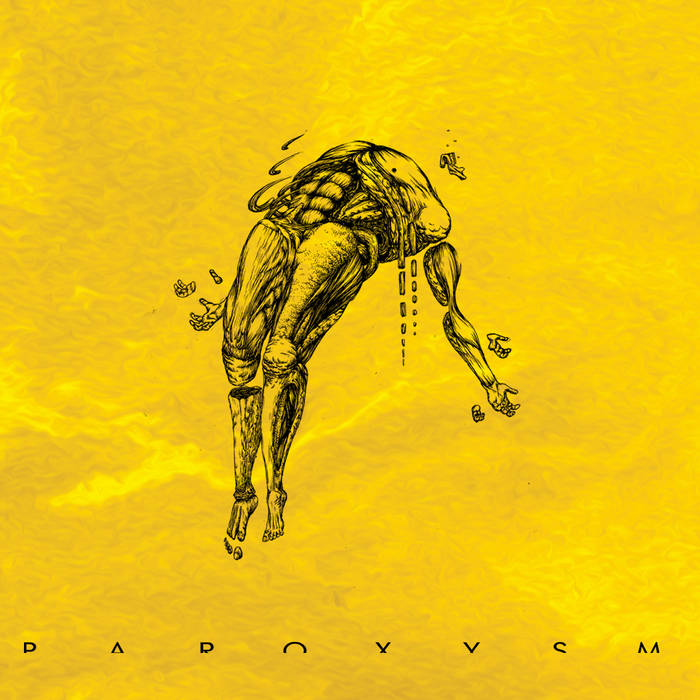 Good gravy, those vocals. Reminds me a bit of Gigan, but no matter how you slice it this guy is a death metal monster. This is, of course, Paroxysm by Plague Rider. The band is an experimental death quintet out of the UK. And in just 4 tracks clocking in about 20 minutes, they are here to slice you into itty bitty pieces.

A paroxysm is defined thusly: "a sudden attack or violent expression of a particular emotion or activity. Synonyms: spasm, attack, fit, burst, bout, convulsion, seizure, outburst, eruption, explosion, access." Very appropriate title for the sound at play here. I'll bring up Gigan again, as they seem to be the closest comparison across the board. There are similar approaches to the twisty, somewhat progressive guitar parts. The bass is a beast all its own, the way it rumbles all over "Hydrophobe." Even the production shares that same rusty edge and rawness.

Guitars chug, screech, and howl their way through dynamic landscapes. The strange, jittery chord structures and progressions conjure images of thousands of scattering insects. Both the bass and lead get their share of solos throughout the duration with the former channeling Victor Wooten and the latter channeling Kerry King. The blastbeats and higher shrieks also give the album a blackened vibe.

My favorite track has to be "Occidite." The maddeningly abrasive, but always impressive, technical showmanship is joined perfectly with some unique melodies. But really, this entire album is filled with technical, psychodelic death metal gold. If you wanted some extreme music that will flex your brain muscles while still getting downright brutal, name your price right now with Plague Rider.