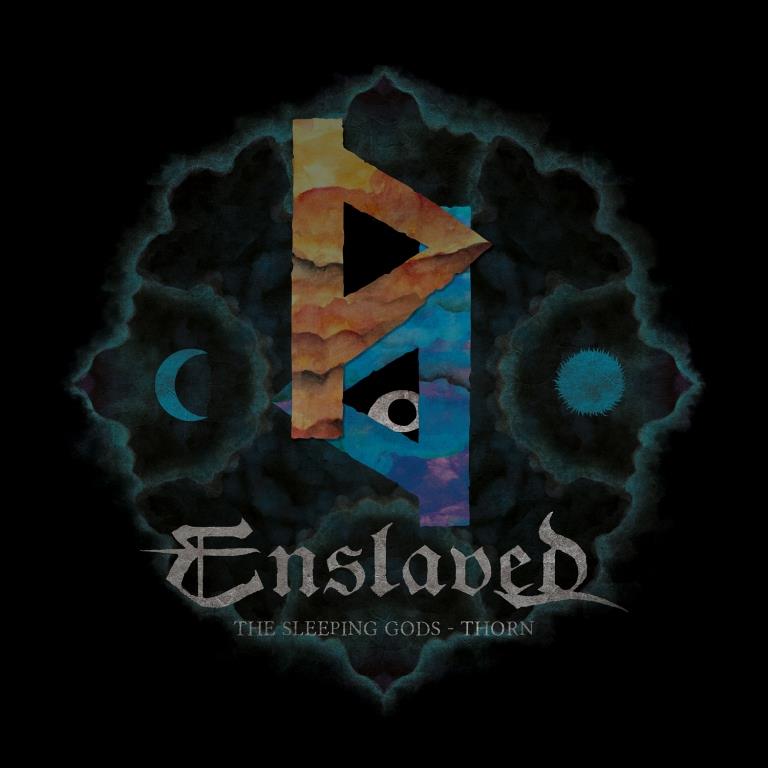 The Sleeping Gods - Thorn
by Enslaved

Enslaved is the gift that keeps on giving.  Not only did the Norwegians drop one another fantastic album into their ever-evolving discography last year; now in 2016 we get a vinyl reissue of their debut AND a disc of unreleased(ish) material (not to mention the Skuggsja project on the side). The Sleeping Gods – Thorn originally appeared on limited EPs between Axioma Ethica Odini and Riitiir (2010-2011).  They were recorded in Solslottet Studio in Bergen, as well as the band members’ own studios and partly in Valevaag.  Members Ivar Bjørnson and Grutle Kjellson co-produced the material together with long-time collaborator Iver Sandøy.

Norwegian, English, and Old Norse; themes centered on mythology and ancient runes; contrasting polytheism with monotheism.  These are all things covered across these 7 songs.  And you know what?  I've heard a few compilation albums in my time, and rarely do they end up being this good.  Like, not even close.  Despite the wild variety in the styles of these tracks, much like their LP's they manage to pull together into a cohesive listen.  Furthermore, I like many of these tracks better than ones that ended up on RIITIIR.   I suppose it should be no surprise as, and I suppose this just my own opinion, but I think Enslaved are one of the best bands around right now.  Period.  The continued reinvention of their sound and experimentation coninues to shine forth on The Sleeping Gods - Thorn.

The band puts both of their best feet forward with "Heimvegen" and "Alu Misyrki."  The former has clean vocals filled with longing complimented by riffs that sound like a mashup of Dio and Rush. Grutle's harsh vocals are spat forth in a growly spoken word.  I don't know the language, but the delivery certainly adds to the melodrama.  The latter track has more of a punk and rock vibe with jangly riffs more akin to what the band used to play on albums like Blodhemn and Mardraum, only this time with a tinge of crust and southern rock (paging Molly Hatchet with that organ combo).  The infectious D-beat and ripping solo, making this my personal favorite.  In some ways it sounds like it could have been on a Taake record.  Oddly enough I also started thinking about some of Poison The Well's tracks from The Tropic Rot, just woth black metal vocals.

"Synthesis" takes us very abruptly for a much needed cooldown.  This one is a wispy ambient/electronic track that could have made a Skinny Puppy Brap comp or cEvin Key album. Trippy.  "Nordlys" keeps the chill vibes flowing with a proggy instrumental that evades description for me but definitely fits in with the band's Floyd influences before segwaying into another folky drum and acoustic traditional in the title track.  I swear they woke at least a few of those gods on this one. Finally the album closes stron with the haunting, Isaish "Disintegrator" and "Striker."

7 Tracks, all different, all fantastic.  I am so pleased that Enslaved chose to share these songs with a wider audience.  It would be a crime for them to be overlooked or forgotten.  Any self-respecting fan of the band must add this to their collection, but this is not just for the die-hards either.  This is a collection thay everyone needs to hear this year.  In a word: sublime.  I was getting a little burned out and was struggling to come up with new ways to describe all of the albums I have covered this year, but with The Sleeping Gods - Thorn I feel rejuvenated.  Thank you for that.