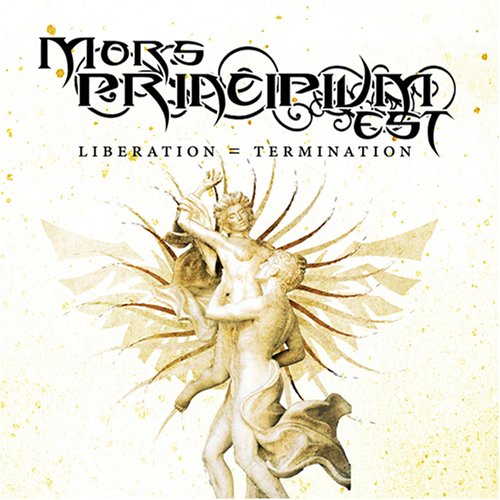 The Pinnacle So Far

A lot of people will point to The Unborn as this band’s finest hour, but I disagree. While that album is excellent and a huge step up from the somewhat lukewarm, imitative Inhumanity; Liberation is the mastery of all previous elements.

The biggest complaint many seem to have is the increased use of electronica-inspired synthesizers. While from a melodeath purist standpoint, I can see the gripe. However, I think this element helps Mors Principium Est etch their own mark into the genre. While on previous albums there was a lot of In Flames, Arch Enemy, and Dark Tranquillity worship; this stands out a bit more. “Sinner’s Defeat” and “The Animal Within" are the most cited for these digital additions, but they are among my favorite tracks. If anything, the keys remind me more of Rammstein than some rave-soaked beeps and boops. You can still call that a drawback, but I disagree.

Onto what most of you are here to find out about: the riffs. I try to avoid needless cursing in these review, but holy fuck…the riffs. This was another element that made me choose this album over The Unborn. The guitars are absolutely relentless on this album. Those classic, rapid fire alternations between palm muting and bursts of melodic picking are in full swing here. I have talked before about this style being done to death, but Mors Principium Est have convinced me that there are a few in the new school that can still shred just as hard as Carcass and At the Gates. Speaking of which, “Finality” sounds like it could be right at home on Slaughter of the Soul, but not in a way that sounds like a cheap imitation. Honestly, there is not a track on here that doesn’t rip, but “The Oppressed Will Rise,” “Cleansing Rain,” and “It is Done” stick out the most to me at the moment. They will melt your face.

Another improvement from the last two albums here in my opinion is the vocals. They come through clearer, stronger, and with more variety. The aforementioned “Finality” feels just as throwback to me due to the high barks as the guitar work. There are also low, throaty roars, sing-screaming ala Ensiferum/Children of Bodom, and slow, plodding growls. The lyrics aren’t always totally inspired, but it wasn’t ever distracting. The drumming and basswork are as strong as ever. The rhythm will keep you banging your head, or at least tapping your foot/pencil/steering wheel. Production is clear, but not overly pristine or condensed.

In closing, this album is awesome. It is another album I have to credit for being very focused, at only about 38 minutes running time. From the first listen, these guys had me, and I did not stop grinning like an idiot until the album was over. As someone who is a bit of a purist regarding the melodeath bands I will listen to, this is the only one to start up in the 2000’s that I can really recommend. If you like this, I of course recommend Dark Tranquillity, early Arch Enemy, At the Gates, and early In Flames.