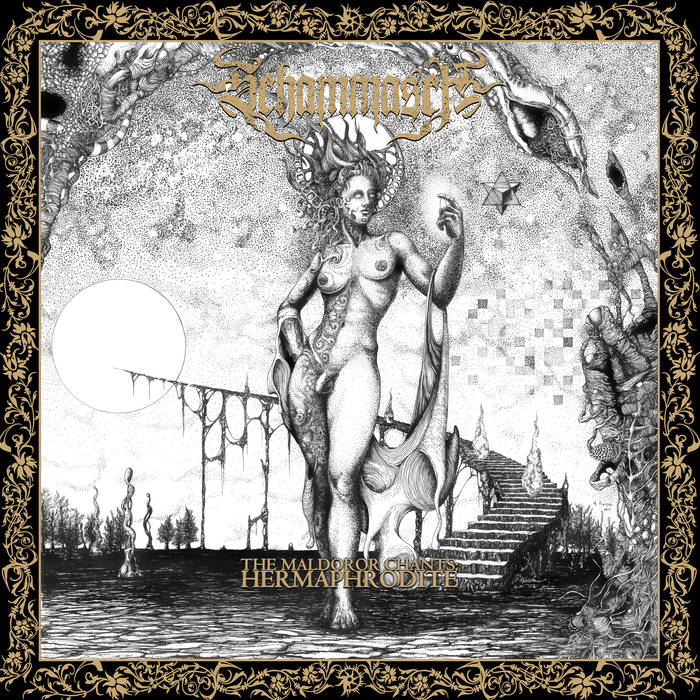 The Maldoror Chants: Hermaphrodite
by Schammasch

The Pitch: Back just a year after their lauded triple-album, Triangle, creative black metallers Schammasch have begun a new concept cycle.  This one is based on the novel 'Les Chants de Maldoror.'  "Having been an inspiration to Schammasch ever since Contradiction, the times have come to give this inspiration the room it deserves. Each record will follow one specific moment of the book, the first one being "Hermaphrodite", a short story which appears aside the main story line in the book's first half."  FFO: Titaan, Akhkys, Blut Aus Nord

What I Like: Well I can't fault a band for suppressing stagnation.  I suppose I shouldn't be surprised given the progression from Contradiction to Triangle, but this new album is a much greater leap to endure.  Whereas the latter chose to increase the use of pure ambient black metal across its sprawling runtime, Hermaphrodite funnels Schammasch's disparate approaches back towards a new, concentrated integration of their sound.  The result is something that is still very much in keeping with the band's overall mission statement, but wholly different than any of their previous endeavors.  On canvas, one could consider it a transition from classical renaissance to modern abstraction.  More concretely, Hermaphrodite is a experiment in spoken word, drifting post-metal, and endless atmosphere.  Wispy guitar lines and enormous drums serve as merely a backdrop for this work of storytelling.

Critiques: Does it all come together?  I'm not quite sure.  While I applaud the band for snubbing an easy pay day after their previous material's success, I find myself a little underwhelmed by the final product.  Aside from the clear gem that is "Chimerical Hope," much of this album fails to strike the same chord within my soul.

The Verdict: Hermaphrodite is a mixed bag from a creative force to be reckoned with.  I may not be enthusiastically waving the same flag I did for Triangle, but this is but the first chapter; a mere prologue as it were.  And I am very curious to see where future stories will take us.

Flight's Fav's: Chimerical Hope, Along the Road that Leads to Bedlam, May His Illusion Last Until Dawn's Awakening