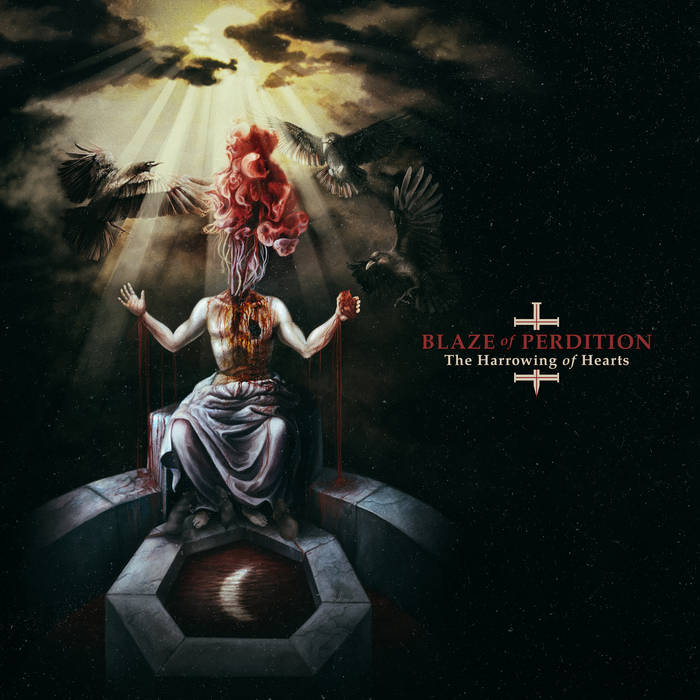 The Harrowing of Hearts

The Harrowing of Hearts
by Blaze of Perdition

Blaze of Perdition has come a long way over the past over the past decade, evolving from a band that stood in the shadow of their influences to one that found their own niche.  Near Death Revelations and Conscious Darkness showcased the group’s ability to build outwards towards dense, otherworldly atmosphere and songwriting that provided plenty of twists and turns while standing out from the pack.  For their latest full length The Harrowing of Hearts Blaze of Perdition has taken a natural step forward, merging rhythmic elements that pull from gothic rock as often as black metal and varying up their writing to create songs that suck you under their spell for longer periods of time than in the past.  You’ll likely need a solid chunk of time to get a feel for all the nuances happening beneath the surface, but it’s well worth it.

Previous material has showcased guitar and drum work that deviated from constant blast beats, but with a new guitarist and drummer now in the band The Harrowing of Hearts showcases additional variation to the writing.  There’s still plenty of dense blasting particularly on tracks like “Transmutation of Sins” where Blaze of Perdition starts things off at an immense and towering peak, but the transitions over to riffs that have some rock grooves alongside the atmospheric build-ups really allows them to stand out and grab your attention.  It’s not dissimilar to some of the elements Schammasch and Behemoth have attempted in recent memories, but where those groups built these ideas into specific songs there’s gothic rock undertones throughout The Harrowing of Hearts.  This is best illustrated by the decision to conclude the album with a cover of Fields of the Nephilim’s “Moonchild” which the instrumentalists take and add some rawer edges to.  These transitions help to separate Blaze of Perdition from their peers, as they not only have catchy hooks and beats with a darker undertone but the layers of desolate and haunting black metal remain which allows the songs to start off in familiar fashion and then twist into something wholly unrecognizable by the end.

Vocalist Sonneillon has stood out on previous material with raspier screaming that towered over the instrumentation, and that’s once again the case here.  It’s a familiar approach, but the immense amount of power that is behind each word makes a considerable difference and Blaze of Perdition has ensured that the vocals are given enough breathing room on the recording to reach their peak level on a regular basis.  This isn’t a one-dimensional performance that relies entirely on screaming, and once you’ve gotten about halfway through opener “Suffering Made Bliss” you get a taste of whispered clean ranges that are utilized throughout the album.  These guys haven’t gone fully towards the somber gothic singing that some of their peers have, but they have pushed outwards in ways that make sense given Sonneillon’s pitch and overall approach.

Five albums in, Blaze of Perdition has reinvented their sound in a way that recalls the gripping atmosphere and violent peaks of their past material while introducing new elements.  There are some added hooks and almost danceable grooves during certain moments but it never simplifies the songwriting and retains the mystery and bleak tone that fans have come to expect.  This is a great example of how a band can propel themselves into new territory without losing what drew listeners in previously, and I suspect there will be plenty of people still unraveling all the layers this album has to offer months later.  The Harrowing of Hearts is available from Metal Blade Records.