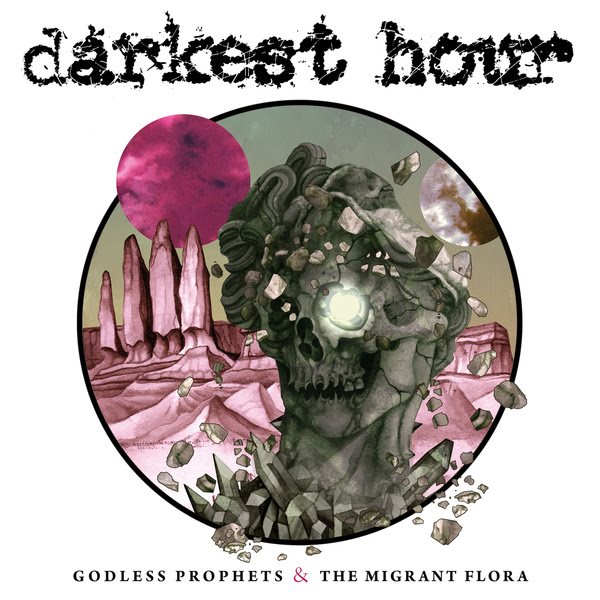 Godless Prophets And The Migrant Flora
by Darkest Hour

The Pitch: The D.C. metalcore masters, once coined as "American Gothenburg," return with their 9th studio album; this time with former guitarist and fan-favorite Kris Norris and producer Kurt Ballou in tow as well as new label Southern Lord.  Can Darkest Hour turn back the clock?

Summary: "Hoh boy, here goes Flight with the meandering nostalgia again."  Shut up, I do what I want.  Yes, Darkest Hour is another band I hold close to my heart from my formative metal years.  Listening to The Mark of Judas back in the day was yet another one of mah jamz, and Norris soloed his savory licks into my heart on one of my personal favorites, Deliver Us many years later.  I still remember my jaw dropping at some of those parts while riding the railways of Chicago.  But then things went south for me.  I enjoyed The Eternal Return enough, but it was the last album I bought.  The direction they took thereafter, especially on the wtf (at least for me) self-titled album was simply one that I could not follow.

I was convinced that our lengthy love affair was concluded at that point.  It was only due to two factors that I decided to give this new album a chance: my main man Kurt Ballou was going to produce, and Kris-the-hook-machine Norris would be contributing.  I tried not to get my hopes up too much.  By and large once a band goes whack, they rarely go back.  But then they dropped the first single...Yes.  This is not a drill.  Not only are Darkest Hour back in rare form, they are releasing some of their heaviest material since Hidden Hands of a Sadist Nation.

So much yes on this one.  You've got a large number of tracks that are borderline hardcore with their stripped-back sound and fire-spewing vocals.  No frills, just thrills.  And I haven't even checked to see which tracks Kris is on, but I'm confident I'd score at least 90% on a blind test.  You can hear those unquestionable Swedish-inspired melodeath riffs and harmonies pop up as strong as ever on tracks like the epic closer, "Beneath it Sleeps."  Aside from the already stellar singles, there are plenty of killer deep cuts as well.  "In The Name Of Us All" is a f#$king scorcher.  Honestly, every track on this album is solid and well performed.  The D-beats get me primed for moshing, and newfound energy of the harsh vocals make me want to scream along every time.

So even if you are like me, a skeptic who just doesn't want to get hurt again, you're not likely to get burned by Godless Prophets & The Migrant Flora.  It will transport you back to the good old days of Undoing Ruin, where you could actually catch their music videos on the revamped Headbanger's Ball.  This album is proof that a big label isn't always the right move or right fit for your band.  At the end of the day if you want to make a good album, you need to get back to basics, hire the people you know will foster your vision in the best possible way, and just get the job done.  I am super stoked to catch these new tunes as well as old favorites live just a few days from the time of this writing.  Pick this one up 3/10 wherever you choose to buy music.  STREAM IT EARLY HERE.

Flight's Fav's: Beneath it Sleeps, In The Name Of Us All, The Flesh & The Flowers of Death