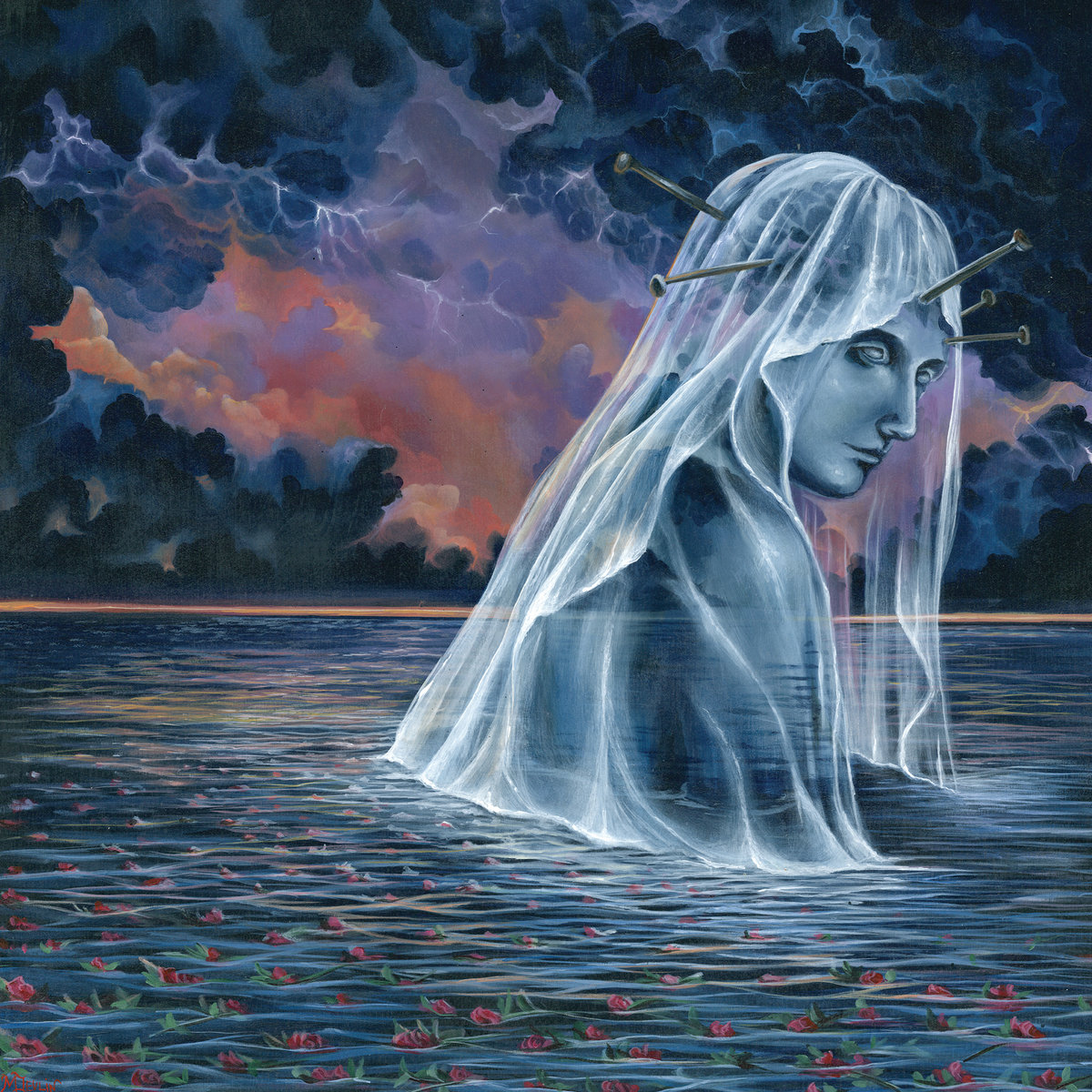 The Diving Bell
by Chrome Ghost

Originally released digitally and on cassette at the end of last year, Chrome Ghost’s sophomore full length The Diving Bell got the vinyl treatment in March courtesy of Seeing Red Records.  For those who have yet to check out the Sacramento based band, they fall somewhere between doom and sludge with an emphasis on sweeping melodic textures and intense climaxes that have the power of an earthquake.  While there have been plenty of groups over the years that have attempted a similar combination, Chrome Ghost’s influences reach a bit farther and thanks to some vocal harmonies and riffs that recall alt-rock and folk they leave a lasting impression.

Spread across four tracks, two of which stretch beyond the ten-minute mark, Chrome Ghost has given themselves plenty of time to not only let their instrumentals build from sparser melodies to roaring climaxes but to also cover a lot of additional ground.  “Waltz in the Shadow of the Hillside gives listeners a pretty good indication of the depth The Diving Bell has to offer in the span of one song, as it starts off with heavy guitar and drum work and chunky bass lines that feel like they could rumble right through your windows at higher volumes.  But only a minute and a half into this, the instrumentals fade out and acoustic guitar comes in, giving a brief respite before the distortion comes back in and additional layers have been thrown into the mix.  This approach continues as you make your way through the remaining three tracks, and the dynamic feel that this material gives off goes a long way in making Chrome Ghost stand above some of the other bands in the genre.  With almost as much airtime given to sweeping melodies that have a cinematic feel and provide imagery of everything from a dusty desert landscape to snowy mountain peaks, there are hints of Americana and folk that further flesh out the group’s take on doom.  When they whip things up into a frenzy, the twangs of distortion remind me of some of the better grooves Yob has offered over the years, and since the heavier sections are fairly spread out each peak is so intense that it immediately grabs you.  It’s always a good sign when songs of this length seem to fly by in half the time, as this is a testament to how much Chrome Ghost can draw you in from beginning to end.

The Diving Bell’s first minute or so might deceive you into expecting extremely harsh and guttural growls for much of the album, but after that initial burst the vocals transition over to much lighter and airier singing.  This is where the group gives off more of an alt-rock vibe, and especially on the closing track “Visions” the lightness of the pitch and the way it hangs slightly above the instrumentals reminds me quite a bit of Maynard James Keenan’s performances with A Perfect Circle.  The growls do resurface after that initial appearance, getting the most focus on the title track, but they’re often used as an additional element that enhances the heavier sections rather than being used as the prominent element.  Given just how many doom and sludge bands seem to go for the same harsh ranges, I prefer that Chrome Ghost has chosen to utilize singing and vocal harmonies more frequently as it differentiates them from the pack.

These guys haven’t lost their taste for heavier grooves and crushing tonality, but it’s now used a bit more sparingly in favor of sweeping atmosphere that brings to mind the sprawling landscapes of the U.S.  It follows a similar path as groups like Bask and In the Company of Serpents, who have pushed outwards from their heavier roots in favor of a more expansive and dynamic listen, but Chrome Ghost incorporates some additional folk and alt-rock textures that put them on a different overall path.  There’s a considerable amount of depth to what these guys have written, and I have a feeling some of these vocal harmonies and soaring climaxes will be stuck in my head for some months to come.  The Diving Bell is available on cassette from Transylvanian Tapes and vinyl from Seeing Red Records.